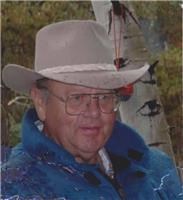 Walter was born on April 18, 1934, in Rexburg, Idaho, the son of Walter Homer Jones and Anna Laura Christensen. He grew up in Drummond, Idaho, and attended schools in Drummond and Ashton where he participated in football, the ski team and played the saxophone in the school band.

On February 5, 1954, he married Jessie Mae Cordingley in Ashton, Idaho. They celebrated their 67th wedding anniversary this year. Walter and Jessie lived in Ashton, Idaho Falls, Driggs, Rexburg, and for the past 14 years in the Grant area. They raised six children--5 girls and 1 boy.

Walter joined the Idaho Army National Guard in 1953, and served in the 116th Combat Engineers. He spent two winters in Fort Belvoir, Virginia, to attend Basic Officers Training. He was honorably discharged as a First Lieutenant on May 31, 1963.

Walter always sought to improve himself and the world around him. He was a talented carpenter and could repair anything mechanical. He shared those talents as he built shelves, tables, and at the age of 72, did the majority of the building on their home in Grant.

In 1977, he took flying lessons, got his pilot's license in 1978, and let everyone know with low flyovers by the house. Throughout his life he worked a variety of jobs including working for D. H. Loosli Building Company, Van Gas, and on the Teton Dam. He hauled milk for Nelson/Ricks Creamery and later purchased his own semitruck. His heart was always with the family farm cultivating wheat, malt barley, and memories.

He served in the Idaho Falls LDS Temple with his wife, Jessie, for 13 years and made many lifelong friends. He loved genealogy and served as a Stake Family History missionary. He held several callings in priesthood leadership in his ward.

He is preceded in death by his parents; his wife, Jessie; and their son, Keith Walter.

Funeral services will be held at 11 a.m. on Friday, May 7th at the Grant 2nd Ward Building, 3431 E 100 N, Rigby, Idaho. The family will receive friends and family on Friday from 9:45 a.m. to 10:45 a.m. at the church prior to services. Interment will be at the Pineview Cemetery in Ashton, Idaho. Those attending are encouraged to observe COVID guidelines.