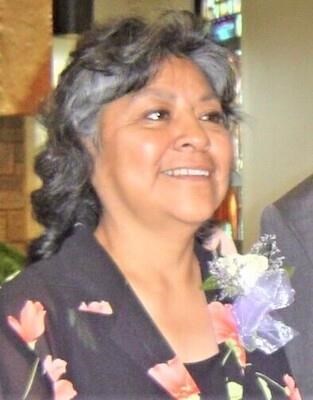 June 28, 2021. Charlotte Jackson Giese passed away at home at age 71. Charlotte was born on December 16, 1949 in Reese River, NV to Irene Jackson and Willie Dyer. She was a member of the Te-Moak Tribe of Western Shoshone. She married Tim Giese on August 20, 1975. Charlotte had a passion for quilting. She was a professional seamstress, and her work was admired by family and friends. She was known for her attention to detail, her infectious smile and laugh, and kind and compassionate spirit. She is survived by her husband Tim and son David from Denton, TX. Sisters Reynilda Melendez and Bea Aleck of Reno, NV, Vicki Yellowhair of Elko, NV, and Carlene Burton, of Battle Mountain, NV, many cousins, nieces, and nephews. A funeral service will be held at a later date at the Austin cemetery.


Published by The Reno Gazette Journal and Lyon County News Leader from Jul. 1 to Jul. 4, 2021.
To plant trees in memory, please visit the Sympathy Store.
MEMORIAL EVENTS
To offer your sympathy during this difficult time, you can now have memorial trees planted in a National Forest in memory of your loved one.
MAKE A DONATION
MEMORIES & CONDOLENCES
1 Entry
To my family and friend I'd like to send a text of flowers to my Aunt Charlotte. God bless you!
Joseph Cortez
Family
July 3, 2021
Showing 1 - 1 of 1 results