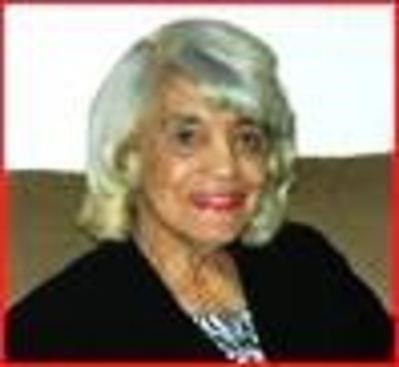 She was born to Louis and Mamie (Beery) Mendocino in a house on Morrill Avenue in Reno on May 24, 1929.

In 1948, she married Lonnie L. Feemster of North Carolina.

As counselor for nearly 34 years at Hug High School, Mrs. Feemster was especially proud of the positive influence she became in the lives of hundreds of students who grew to know and love her.

In all aspects of her life, she strived to reduce racial discrimination and increase diversity and cultural training for teachers. Even in retirement, she was often called upon to help the school with family and student outreach.

Her home was always open to anyone, the door seldom locked. Neighborhood foundlings, needing a place to spend the night, were welcome at Mother Dolores' place. A who's-who of UNR athletic stars and students hung out there.

She turned her small dwelling into a true community center, displaying a sign in her front window reading, "The love of a family is one of life's greatest blessings."

Mrs. Feemster served on the Economic Opportunity Program board and originated many services for the young and elderly. As a social worker for the Washoe Association of Retarded Citizens, she was instrumental in the initiation of several programs for senior citizens.

Proceeding with her children as they grew, she started Cub Scout, Bluebird and Girl Scout troops. She also became a leader in Blue Birds, Campfire Girls and president of the Glenn Duncan Elementary Parent Teacher Association.

Dolores devoted many years to volunteering for a wide range of non-profit organizations. She served in various capacities in the Reno-Sparks NAACP, eventually rising to the presidency. She served on the board of the Nevada Parent Teacher Association and was honored for her work at the Nevada PTA annual conference. She was a founding member the Northern Nevada Black Cultural Awareness Society and also served on the boards of Washoe Legal Services and the Community Services Agency of Washoe County.

She was known for her calming influence which allowed her to positively address civil rights issues impacting Native American, African American, Asian and Latino cultures of northern Nevada. Long before labor legend César Chávez became an international figure, he visited Reno and met with Mrs. Feemster.

She was active with the Democratic Party of Washoe County, her fence was a coveted campaign sign location.

The Reno Gazette-Journal reported that "as a counselor at Hug High School, she helped countless children find a safe place to learn and earn a diploma. As a community activist, she helped galvanize civic leaders to build affordable housing for abused women, senior citizens and families in need. As a civil rights activist, she marched, painted over racist signs in the night and helped integrate Reno's schools."

She started an Adopt-a-Grandparent program after noticing that many older people had no one to visit with them or take them out to eat or shop. She recruited college students as volunteers.

In recognition of her community service, Dolores Feemster received numerous awards including Mother of the Year from the Reno Business and Professional Women's Club; the University of Nevada, Reno, President's Medal; and both Outstanding Achievement and Lifetime Achievement Award from the Reno-Sparks NAACP. In 1990, she was inducted into the Nevada Women's Fund Hall of Fame as Humanitarian.

In 1997, the Reno Housing Authority named a facility in her honor. The Northern Nevada Martin Luther King, Jr., Holiday Committee honored her with its 2015 Humanitarian Award.

"I donate my time because I have no money. If I had money, I would donate that," she once stated in a news article about her life of volunteerism.

She was preceded in death by her husband, Lonnie Feemster, Sr., sons Darryl, James and Ronald, and grand-daughter Eboni.

A memorial service will begin at 12 noon on Saturday, June 9, at the Reno-Sparks Convention Center, Peckham and S. Virginia Streets. Parking will be free and ushers will be available to direct and assist.

A reception will be held immediately after the service at the Hug High School cafeteria on Sutro at North McCarran in Reno.

Visitation will be take place from 6:00 to 8:00 p.m. on Friday, June 8, at Walton's Sierra Chapel, 875 W. 2nd Street in Reno. Mrs. Feemster will be laid to rest at a private family ceremony at Reno's Mountain View Cemetery.

Dolores Feemster's peaceful countenance and wise counsel will long be missed by everyone fortunate enough to have known and loved her during her nine decades in the Nevada she uplifted.

She loved her family, friends and extended family. She was an educator, historian and mentor.

I just learned of her passing; it will leave a deep, gaping hole in the many lives that she touched in Reno. Margo Means
July 31, 2018
My condolences to the Feemster family. Dolores was a remarkable human being. It was a privilege working with her at Hug High School. There was no finer person than Doloreskind, gentle, tough, loving, always courteous.
Steve Hull
June 12, 2018
Gail Smith
June 11, 2018
Anthony Hall
June 11, 2018
Lonnie and Family members,
Truly sorry for the loss of your mother. She was quite a lady, and I wish I would have had the good fortune to have known her. May all the wonderful memories bring comfort and joy. My sincere condolences.
Bob Smith
June 10, 2018
You will be missedLove, Isaiah
Isaiah Williams
June 9, 2018
I have lost one of my true friends and I am very sad. Dolores was my friend for many, many years and she will always be in my heart. She was such a caring and giving person that everyone in this community loved, I certainly did. She will truly be missed by me. Rest in Peace Dear Friend.
Lucille Adin
Friend
June 9, 2018
As President of the NAACP Tri-State Conference of Idaho, Nevada and Utah, we share in the many condolences for our devoted member, Dolores Feemster. She will be missed and remembered for all that she did to help others. Dolores was always willing to give words of encouragement to everyone.

To our friend and State Conference Vice President, Lonnie Feemster, we send our deepest sympathy. Our thoughts and prayers are with you and your family.
Jeanetta Williams
June 8, 2018
Dolores your truly missed I remember you told me 34 years ago that I can accomplish anything I put my mind to those words I remember everyday
Rhea Anderson
June 6, 2018
When I first began teaching at Hug High School one of the first people I got to know was Dolores Feemster. She quickly became one of my favorite people in the world. Heaven's gain is our loss. May God's blessings be with her and her family.
Brent Matthews
Friend
June 6, 2018
What a beautiful soul you were. I was so blessed to have you share your wise words when I was in high school. You truly touched my heart and many others. Youll never be forgotten!! RIP MRS. FEEMSTER
Eva Figueroa
Student
June 6, 2018
The generous, nurturing spirit of Dolores will live on in the hearts of all those who loved her. Precious in the eyes of the Lord is the death of His saints.
Karen Hudson
June 6, 2018
To the Family of Dolores Monica Mendocino Feemster

I am truly and deeply sorry for your loss. May God the hearer of
prayer comfort you during this difficult time and give strength Psalm 29:11
Sylvia C
June 6, 2018
This is a tragic day we all knew would eventually arrive as we all are bound by this law. Sadly, this does not make arrival of this terrible event easier to accept. While it does not make our loss less painful, I cannot help but reflect on my experiences with Ms. Feemster at Hug High and over the subsequent years. I am certain I would not be where I am today if not for Ms. Feemster's knowledge, support and guidance during those formative times. I remember her kind and supportive smile and the tone and timbre of her wonderful voice as she shared her wisdom with students.

I was very fortunate to cross paths with Ms. Feemster numerous times over the last 30 years. I remember wanting to provide updates on my life during our brief conversations. As I enjoyed these memories I initially thought I was being selfish and self-centered for wanting to share facets of my life with Ms. Feemster. I quickly realized this is what Ms. Feemster wanted to know about all of us, her students. She was genuinely concerned about all of us!

While Ms. Feemster is no longer here in flesh she will be here forever in the lives of THOUSANDS of students and others she touched with her presence throughout her lifetime.

Thank you for everything Ms. Feemster! In a world that seems to become increasingly challenging, you were certainly a force for goodness.