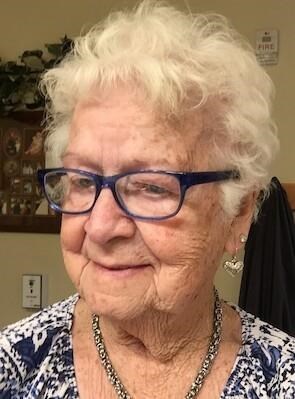 Irma Jean Valentine Juenke passed away on June 1, 2021, her last days were spent visiting with her family.

Irma was born to Edward and Della Valentine on November 29, 1928, in Cheyenne, Wyoming. She grew up in Big Bear, California before moving to Santa Monica where she met her husband, Vern Juenke. Irma and Vern moved to Reno, Nevada in 1954 and they built their life and family there. Irma and Vern had 4 children, a beautiful home in Mogul, and enjoyed a marriage lasting over 70 years. She loved and supported her friends and family and would do anything she could for anyone who needed her. Irma was fiercely independent and could accomplish anything she set her mind to. Whether it was refinishing and repairing antique furniture or building a deck, if Irma wanted something done, she would figure out a way to do it with little help.

After Vern's death in 2018, Irma sold the house and moved into an independent living community. She lived there for almost three years, loving every minute. Irma could often be found renovating and refinishing furniture in her small one-bedroom apartment, rearranging and crafting things to better fit her liking. When her apartment became the game spot, she sold her couch so she would have more space to accommodate her friends. There were many legendary games of Farkle, Mexican Train Dominoes and cards. Irma had so much fun playing Bingo, Bunco, Farkle, and getting in trouble with her friends that it was sometimes hard to get ahold of her because she was always busy. During the Covid quarantine, she made a pulley system with a basket on a rope so she could exchange goods with her family from her 3rd floor patio. If we were lucky, she would send down some of her homemade fudge and some money under a rock. When her plants filled her apartment, she started giving away cuttings to the staff and her friends. Irma would plant her cuttings into coffee mugs her daughters would find for her at goodwill. These cups of joy were left all over her community with signs on them saying things like "I'm yours now" or "Take me home" which showed just how generous and caring Irma was. She has left behind a legacy of herself that will be hard to miss.

Irma is survived by her 4 children, Kathy (Tim), Colleen (Tom), Kenny (Lori), and Patty (Russ); 7 grandchildren, Cliff, Tami, Brad, Will, Jessica, Sara, and Adam; and 9 great grandchildren, Briona, Maya, Drake, Cale, Tegan, Leila, Louie, Leo, and Saffron. Irma also leaves behind her longtime friend Phyllis, and a large group of friends at Cascades of the Sierra. Irma will be laid to rest with her beloved husband, Vern, at Northern Nevada Veteran's Memorial Cemetery in Fernley, Nevada. Services will be private. Please remember to honor Irma's memory by being good to one another.


Published by The Reno Gazette Journal and Lyon County News Leader from Jul. 8 to Jul. 12, 2021.
To plant trees in memory, please visit the Sympathy Store.
MEMORIAL EVENTS
To offer your sympathy during this difficult time, you can now have memorial trees planted in a National Forest in memory of your loved one.
MAKE A DONATION
MEMORIES & CONDOLENCES
0 Entries
Be the first to post a memory or condolences.