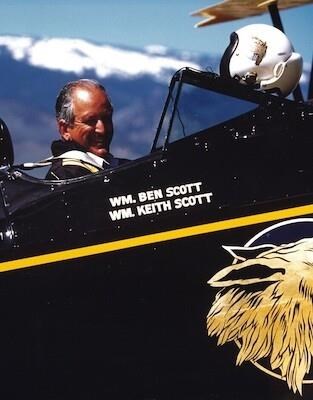 Reno - William Benjamin "Ben" Scott "flew west" on June 21, 2021, after a prolonged battle with congestive heart failure. Ben had 84 years of a life filled with family, friends, and FLYING. His quick wit, ready smile, sharp mind, devotion to family, love of aviation, and steady friendship will be sorely missed.

Ben graduated from Flintridge Preparatory Academy and went on to receive a Bachelor of Science in Mechanical Engineering at Cornell University. Years later, it was determined that his coursework at Cornell was sufficient to award him a Master's Degree in Mechanical Engineering. After graduating from Cornell, he continued his education at the University of California - Berkley, where he received his Master's in Business Administration.

While on a visit home to Reno, Ben noticed a go-cart buzzing around the neighborhood, and remarked to his sister Peggy that he would like to take a ride in it. Peggy's husband Harry mentioned that there was a beautiful young redhead at the same address as the go-cart, and Peggy set up the date. It turned into quite a go-cart ride! Ben, a GM dealer's son, and Sandy, a Chrysler dealer's daughter, met, courted, and eventually Ben proposed. Delighted with Ben's proposal, Sandy agreed. Later, friends would joke about it being a GM/Chrysler merger.

Ben was a model husband to Sandy, his wife of fifty-eight years. He would laughingly describe it as "the thirty happiest years of his life" but the truth was obvious to all who knew them. He was an excellent father to his four sons and in solidarity with Sandy, refused to admit that at some point they were hoping for a girl. He thought the boys turned out well, a surprise result he attributed almost exclusively to Sandy's efforts.

After ten years with IBM in San Jose, and two more in Reno, he left behind the blue suits and striped ties and joined the family business. Scott Motor Company, founded by Ben's father William Keith Scott, proudly served Northern Nevada for over eighty-four years. Ben was pleased to enter retirement after forty years in the car business and especially pleased to have his supplier in the rear-view mirror. His license plate, "XGMDLR", says it all.

Though a pilot since his college years, Ben's passion for aviation was truly rekindled in 1985 with the re-acquisition of the Stearman 4E Jr. Speedmail his father had purchased new in 1930. The black and yellow biplane was a frequent sight in the Nevada skies as it took him on adventures from coast to coast including flying the mail in celebrations of the 75th and 100th anniversaries of air mail service, the National Air Tour in 2003, and numerous air shows and fly-ins around the country. While his interest in antique aircraft resulted in the restoration of other aircraft, including a Howard DGA, Grumman Widgeon, and North American T-28D, his true love was always the Stearman which remains with the family to this day.

Ben was extremely engaged and active in his community. He served as President of his Kiwanis Club, the Nevada Franchised Auto Dealers Association, the Reno-Sparks New Car Dealers Association, the Executive Association of Reno, and The Nevada White Hats. He was a member of the Board of Directors of Prospector's Club, the Greater Reno-Sparks Chamber of Commerce, the Better Business Bureau, and the Reno Air Race Association. He served as a Trustee of Yesterday's Flyers, and as a Trustee Emeritus of the Reno Air Racing Association. He was a lifetime member of the Experimental Aircraft Association (if you did not already know it, or could not tell from the foregoing, flying was a hobby/obsession). He was especially proud to be a member of the Quiet Birdmen. He was a supporter of Boys Club, a Leadership Member of the Boy Scouts of America, and was named an Honorary Lieutenant by the Washoe County Sheriff's Honorary Deputies Association.

Ben was preceded in death by his father, William Keith Scott and mother, Della Pitcher Scott. He is survived by his wife Sandy, his sister Peggy Brown (Harry), sons Keith (Melanie), Ken (Kim), Kelly and Casey, nieces Martha and Melissa, nephew Keith, and his grandchildren, Kallista, Kelsey (Jacob), Ben and Emily, each of whom were clearly his favorite.

A memorial and scattering of Ben's ashes from the Stearman will be held at a later date. In lieu of flowers, donations may be made to Dream Flights (www.dreamflights.org, 1894 East William Street 4-451, Carson City, NV 89701), a non-profit dedicated to honoring military veterans with flights in vintage Boeing Stearman military trainers.

Published by The Reno Gazette Journal and Lyon County News Leader from Jun. 30 to Jul. 4, 2021.
To plant trees in memory, please visit the Sympathy Store.
MEMORIAL EVENTS
To offer your sympathy during this difficult time, you can now have memorial trees planted in a National Forest in memory of your loved one.
Funeral services provided by:
Walton's Funerals & Cremations - Sierra Chapel
MAKE A DONATION
MEMORIES & CONDOLENCES
Sponsored by Walton's Funerals & Cremations - Sierra Chapel.
9 Entries 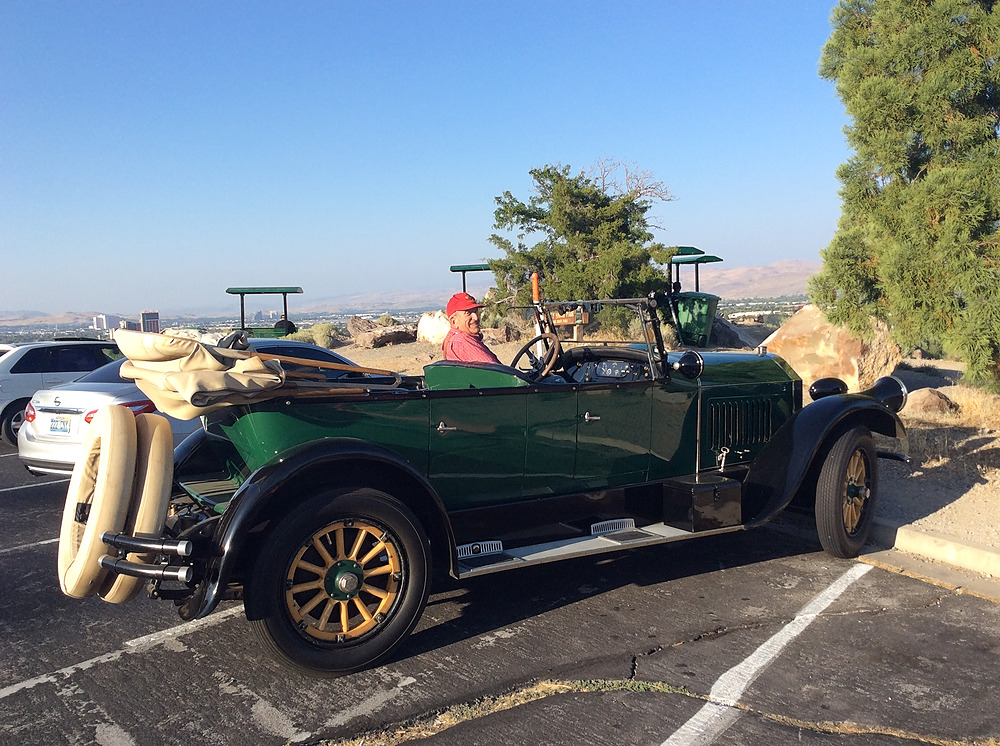 So sorry to just now learn of Ben's passing. He and Sandy showed no end of hospitality to a stranded pilot far from home 3 years ago. Those are treasured memories that will live forever with me. His generosity and thoughtfulness lives on... Deepest sympathies to his family, friends, and all of us on his loss to this world.
Thomas Barnes
Friend
October 11, 2021
I was ben´s tractor mechanic , he was not just a customer but a friend too. Live to listen to his story´s and he loved showing me his old cars , I will truly miss you Ben your soft words and kind heart , Im heart broken that K won´t ever see you again
Thomas John Chagolla
Friend
July 17, 2021
Casey - I am so so sorry for your loss. My Thoughts and Prayers are with you
AJ Johns
July 5, 2021
Ben is one of the finest men I´ve ever met. I always enjoyed Ben´s dry humor and he always willing to help a novice car dealer like me. God Bless the Scott family.
Arne Hoel
Friend
July 5, 2021
To the Scott family , we are so very sorry to hear about the passing of Mr. Ben Scott . Mr. Scott was a fine man , who along with his wife Sandy , raised four outstanding sons . We were so impressed with the example that was set for them . As neighbors back in the 1980's , we have some funny memories of rounding up wayward dogs , chickens and horses that somehow made their way between our two households . Babysitting sons and and their plethora of pets , tarantula included ! Those were simpler times , before our playground became paved over with houses , golf courses and and everything in between . Please accept our condolences . In deepest sympathy , Pauline , Helen , Evan , and Maria Adamis .
The Adamis Family
Friend
July 4, 2021
To the Scott family I am so sorry to hear of your loss. I did not know your father, but my Dad (Dan Stockwell) was a friend of Mr. Scott. My Grandfather (John Stockwell) also worked for Scott Motors. My Dad passed in early June, I hope your father and my Dad are discussing and flying planes. Again I am sorry for your loss and I am praying for your family.
Susan Stockwell McKinnish
Friend
July 4, 2021
I see Reno has lost a most generous soul. My dad, Erick Bjorum, worked at Scott Motors for some years. Ben always took care of him and his fellow Pearl Harbor Survivors by driving them in the Veteran's Day Parade in his special very special Corsair car. Dad always had the nicest things to say about Ben Scott. A life well lived. My deepest condolences to all.
Ericka Bjorum-Nelson
Other
July 2, 2021
I want to extend my deepest condolences to the Scott family. During my years as executive director for the Nevada Association of Employers, Ben was a valuable member of my board of directors. He provided support, guidance and mentorship to me so many times during my tenure. I will always be grateful to Ben for everything he did to ensure NAE's success and mine. Rest in peace, Ben.
Jim Nelson, Kirkland, WA
July 2, 2021
I will always remember the tales my husband, Tony, would tell me after he visited with you regarding your ditch. Please accept my deepest condolences.
Luann Groux
Friend
July 1, 2021
Showing 1 - 9 of 9 results