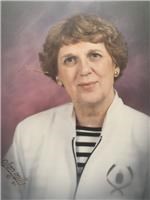 Joan was born in Ridgway, Pa., on July 12, 1931, to Michael A. and Helen Peterson Denenzio. She grew up in Ridgway and graduated from Ridgway Area High School in 1949. She also graduated from the Presbyterian University Hospital School of Nursing in Pittsburg, Pa., in 1952 and was a graduate from the St. Francis School of Anesthesia in Pittsburgh Pa. She worked as an registered nurse at Children's Hospital in Pittsburgh, Pa., and as a nurse anesthetist at Elk County General Hospital in Ridgway, Pa.

She is preceded in death by her parents, her husband Frank; and a son, Michael Timothy Butt.

Joan was a member of the North Warren Presbyterian Church, the Conewango Valley Country Club and the Warren Women's Club. Joan belonged to the Warren Du-plicate Bridge Club, where she was considered a bridge aficionado.

During her years of retirement, Joan enjoyed spending time with her family and the winter months at her home in Florida.

A funeral service will be conducted at the North Warren Presbyterian Church on Saturday Sept. 18, 2021, at 10 am. Rev. Buddy Ward will officiate. Burial will follow the funeral service at the Warren County Memorial Park Cemetery.

In lieu of flowers, memorials can be made to the North Warren Presbyterian Church 200 South State Street North Warren, PA 16365.
Published by Ridgway Record from Sep. 17 to Sep. 18, 2021.
To plant trees in memory, please visit the Sympathy Store.
MEMORIAL EVENTS
Sep
18
Funeral service
10:00a.m.
North Warren Presbyterian Church
200 South State Street, North Warren, PA
MAKE A DONATION
MEMORIES & CONDOLENCES
2 Entries
Dear Joan: You will be missed so much. Great times spent together at PGA West, LaQuinta, CA at the golf tournaments. Great memories! RIP my cousin.
Patti Krise Davis
September 18, 2021
RK and David: I know you don´t know me but your mom was our neighbor and my mom´s good friend for years. I am sorry to see she has passed and wish I had known she was in St. Petersburg as I winter in New Port Richey. Please accept my sympathy for the loss of your mother.
Judy Caggiano Carr
Friend
September 18, 2021
Showing 1 - 2 of 2 results