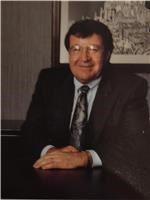 BORN
1936
DIED
2021
FUNERAL HOME
Edwards-Dowdle Funeral Home, Inc.
64 Ashford Avenue
Dobbs Ferry, NY
Saul Singer, the former CEO of Robison, one of the largest full-service home comfort and energy companies in the region, died on Jan. 10 in Florida. He was 84.

Singer led the growth, expansion and diversification his family's home heating oil company, which started as Original Consumers Oil, serving the five boroughs of New York. Over time, it grew into a full-service energy company serving thousands of residents throughout Southern Westchester and Putnam Counties.

He was born on May 30, 1936 to Anna and Harry Singer. His father founded the company Original Consumers Oil in 1928, and in the 1980s the company purchased Robison Oil, which was founded in 1921.

Robison is celebrating its 100th anniversary this year. The Port Chester-based company has 200 employees and serves more than 20,000 homes and businesses in the region.

Saul, his wife Fran, and his sons oversaw a more than three-decade expansion of the company, purchasing more than 15 regional oil HVAC companies while diversifying into air conditioning services, domestic plumbing, and green renewable energy solutions.

Singer was also a significant contributor to the betterment of Jewish life and culture in Westchester. He was the youngest President of Greenburgh Hebrew Center at age 30 and a founding member of the Solomon Schechter School in White Plains, a co-educational Jewish day school, now the Lefell School. He was a founding member of the Westchester Business and Professional's division of UJA, chaired the Westchester division of Israel bonds and the Jewish National Fund. He led a mission to the Former Soviet Union to deliver religious items to dissidents and returned to create the Westchester Conference on Soviet Jewry, now the Westchester Jewish Council, that fought for the release of the Jewish people from behind the Iron curtain.

Singer graduated from University of Illinois in 1957 with a BS degree in Mechanical Engineering. He enjoyed a great relationship with the Teamsters Union and sat as a trustee until his death.

He was a proud supporter the White Plains Hospital, and dozens of other local charities.

Due to COVID-19, in-person funeral services and Shiva are restricted to immediate family.

Donations to the following organizations can be made in his honor: UJA Federation of Westchester; Westchester Jewish Council and the Greenburgh Hebrew Center.

Published by River Journal from Jan. 12 to Jan. 13, 2021.
To plant trees in memory, please visit the Sympathy Store.
MEMORIAL EVENTS
To offer your sympathy during this difficult time, you can now have memorial trees planted in a National Forest in memory of your loved one.
Funeral services provided by:
Edwards-Dowdle Funeral Home, Inc.
MAKE A DONATION
MEMORIES & CONDOLENCES
Sponsored by Edwards-Dowdle Funeral Home, Inc..
4 Entries
My sincere condolences the Singer Family.
Steve Reyes
Coworker
January 18, 2021
My sincere condolences to the Singer Family.
Steve Reyes
Coworker
January 18, 2021
Prayers and fond memories are what you have to remember your dearly departed. May the love of family and friends comfort you during these difficult days. Please accept my most heartfelt condolences.
Simone Taylor
January 15, 2021
Saul Singer, you were a client of mine since the late 1960s with Original Consumers but more than that you were a great friend. I wanted to see you again and had planned on visiting last year in Florida but Covid stopped that. God's speed Saul. Rest in Peace.
Gary J Sullivan
Friend
January 13, 2021
Showing 1 - 4 of 4 results