Allen Kenneth Briggs
FUNERAL HOME
McCoy Funeral Home
150 Country Club Dr SW
Blacksburg, VA
Allen Kenneth Briggs, 41, died suddenly on Saturday night, March 3, 2012, at home in Blacksburg, Va. He is survived by his wife, Elizabeth Pandolfo Briggs; and sons, Allen Raymond and Grayson Thomas, both turning 11 on March 12. A Memorial Service in the manner of Friends will be held at 2 p.m. on Saturday, April 14, 2012, at Blacksburg Friends Meeting, 404 Mount Tabor Rd., Blacksburg, Va.
Allen was born in Oak Ridge, Tenn., on June 11, 1970, the son of Elizabeth Hodnett Addison and the late Gary Allen Briggs. He is survived by his mother and stepfather, James C. Addison Jr., of Cullowhee, N.C.; his siblings, Jeremy David Briggs, of Weaverville, N.C., Sara Addison-Kristel, of Greensboro, N.C., and Jesse B. Addison, of Atlanta; plus in-laws, Dean and Karen Lorenz, of Columbia, S.C., and Robert and Katherine Luvaga, of Burnsville, N.C.; and numerous aunts, uncles, and cousins.
Allen was a computer software designer who was interested in digital devices from childhood in Sylva, N.C. He was educated at NCSSM and Virginia Tech, where he majored in Computer Science and got involved in the open-source software NetBSD. Before and after graduation, he did work for several small computer firms and joined Apple, Inc. four and a half years ago. He was adept at solving compatibility issues and generous with his talents.
His colleagues and family appreciated his problem-solving ability, his kindness, and his gentle demeanor. A Quaker, Allen had become active in Blacksburg Friends Meeting and Baltimore Yearly Meeting, and he cherished his experiences at Camp Celo in Burnsville, N.C. He was committed to social justice and other Quaker values. A networker, he kept connections active in all areas.
Among his reading interests were science fiction and poetry, especially Yeats. He loved travel and had a special interest in Japan. Most recently he was pursuing a pilot's license and had almost achieved it.
In lieu of flowers, Allen's preferred charities are Doctors without Borders, American Friends Service Committee, and the North Carolina School of Science and Mathematics.
McCoy Funeral Home, Blacksburg, Va., is assisting with arrangements.

Published by Roanoke Times from Mar. 9 to Mar. 11, 2012.
To plant trees in memory, please visit the Sympathy Store.
MEMORIAL EVENTS
To offer your sympathy during this difficult time, you can now have memorial trees planted in a National Forest in memory of your loved one.
Funeral services provided by:
McCoy Funeral Home
MAKE A DONATION
MEMORIES & CONDOLENCES
11 Entries
I only knew Allen through work, but you didn't need to be too close to Allen to know he was a terrific guy. Calm, patient, highly intelligent and a genuine human being. He will be missed.
Kai Kaahaaina
March 13, 2012
Elizabeth, my deepest condolences to you and the boys.
Elizabeth Eaton
March 13, 2012
Elizabeth, my greatest condolences to you and your boys. Allen was a gift to the world. We will never forget him, and we will be keeping you in our prayers.

Mandy Wilson
Mandy Wilson
March 12, 2012
Elizabeth, I am holding you and the family in the Light. I've valued my friendship with you and Allen over the years; support from both of you kept me afloat on many occasions that I nearly drowned in isolation. If I can provide any support, let me know.
Joshua Humphries
March 9, 2012
Allen was quiet and soft-spoken, a man whose expertise shone through everything he did; it was plain to everyone that he knew what he was talking about, and more. He touched many throughout the world with his calm air of assurance. I'm really proud to have known Allen.
Alistair Crooks
March 9, 2012 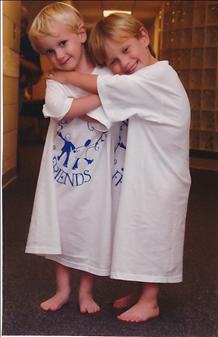 So sorry to hear this news. Please give boys Allen & Grayson hugs from Jenifer & Alessandra (11yr) of Friends Meeting of Washington. We met at the yearly gathering at JMU. Here is a photo from 2004
Jenifer Morris
March 9, 2012
My sincere condolences to the friends and family. He will be missed by all.
Thomas E. Spanjaard
March 9, 2012
I only knew you through your contributions to NetBSD. You will be greatly missed by this community, and I regret not having the opportunity to meet you in person. R.I.P. Allen.
Greywolf .
March 9, 2012
He was a good example to us all. We will miss him.
S.P. Zeidler
March 9, 2012
May God bless you and your family in this time of sorrow.
Jun Ebihara
March 9, 2012 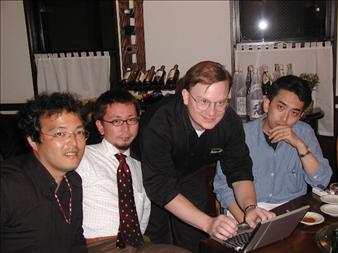