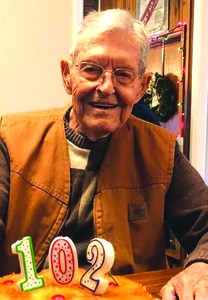 "Mr. Al" also known as the Buffalo Nickle Man was a lifelong resident of Roanoke. After he graduated from Jefferson High School, his first job was as a soda jerk in downtown Roanoke. During World War II he served in the Army Air Corps. In the 40's he enjoyed flying planes around the area, including flying his children down Jefferson Street to see the Christmas lights and a forced landing in a field at the Salem Veterans Administration campus.

For most of his working life, Al was a "Feed Peddler" for Roanoke City Mills and he built valued friendships with his customers and their families. He organized and led educational farm tours for farmers in Roanoke and Bedford for over 50 years, traveling all around the east coast and Canada for their 50th tour.

His hobby as an antique gun collector came in handy for negotiating deals to provide braces, cars, and college for his kids. Another interest was travel, going on a cross country camping trip with his family, bus trips with the youth, a visit to Japan with his wife, trips to wherever his son was stationed while in the Air Force, and many beach and lighthouse trips. In his mid-80's he traveled to Jamaica on his first mission trip to a deaf school – even learning sign language.

Al loved being with people and always had a song in his heart. He had a beautiful tenor voice and he sang in choirs for 80 years. He loved to lead the singing for churches, Christian Endeavor conventions, family parties, retirement homes and any other opportunity that presented itself. After retirement he made it his mission to visit others – holding sing-a-longs and lifting spirits at assisted living facilities, visiting friends in the hospital or taking pie and ice cream and spending time with family and shut-ins. He never stopped meeting people. In his 90's he could be found walking around downtown meeting people and telling them Roanoke's history (or at least his version of it).

He was a loving father, grandfather and great-grandfather. Each of his children thought they were his favorite. He kept in touch with his grandchildren as they went to college and on to their careers. In his final year he lived with his granddaughter and became best buddies with his great-grandson sharing special time together each evening.

A Celebration of Life will be held at 11 a.m. on Saturday, May 1, 2021, at Melrose Baptist Church, 3520 Peters Creek Road, Roanoke, Va. The family will receive visitors an hour before the service. In lieu of flowers, the family encourages a donation to your local church or to International Christian Centers for the Deaf, iccd.net or I.C.C.D. P.O. Box 540, Cloverdale, VA 24077.

Simpson Funeral Home
To plant trees in memory, please visit our Sympathy Store.
Published by Roanoke Times on Apr. 18, 2021.
MEMORIAL EVENTS
May
1
Visitation
10:00a.m.
Melrose Baptist Church
May
1
Celebration of Life
11:00a.m.
Melrose Baptist Church
3520 Peters Creek Road, Roanoke, Virginia
Funeral services provided by:
Simpson Funeral Home
GUEST BOOK
Sponsored by Simpson Funeral Home.
2 Entries
Your dad was such a kind and gentle man.We were blessed to know him and your mom and some of the family as we worshipped together.God bless you with his comfort and peace in this sad time.We rejoice with you knowing he is in the arms of Jesus.Love in Christ.
Jack and Nancy Moore
April 21, 2021
Remembering all the times on the farm tours
Ralph Naff
April 15, 2021