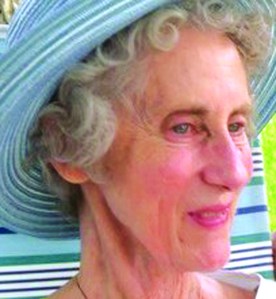 A kind, gentle soul passed from this world in the early hours of March 10, 2021. Bobby Keeton was born and raised in Blacksburg, Virginia, by her parents, Fred and Katherine Orcutt. Roaming the woods of the Blue Ridge Mountains as a child, and spending part of high school in Hawaii, she developed a life-long love of natural history, which later developed into staunch advocacy for conservation. While a counselor at the Virginia Federation of Garden Club's Nature Camp in the Shenandoah Valley, she developed a romance with her future husband, William "Bill" Tinsley Keeton (b. 1932 – d. 1980), whom she married in the summer of 1958. First attending Virginia Polytechnical University, she later transferred to Cornell University in Ithaca, N.Y., to be with her husband, then a newly minted faculty member at Cornell.

Bobby completed her B.S. in Natural Resources at Cornell in 1959. She continued with graduate studies in animal behavior working with Professor William Dilger, but the demands of raising three young children prevented her from completing her masters. Nevertheless, her zeal for exploring the natural world continued, taking her on research expeditions and trips to a host of exotic locations, including remote corners of Mexico, Peru, the Pacific Northwest, and Micronesia. Bobby and her family lived in Germany for two years while her husband was on sabbatical, first in Munich (1972-1973) and later in Konstanz (1978-1979).

It was in the 1980s that Bobby's conservation work took off. She began working actively with The Nature Conservancy, serving as treasurer of the Central and Western New York Chapter for 11 years. She was a tireless advocate for and supporter of the Natural Resources Defense Council, the Environmental Defense Fund, and The Wilderness Society—among others. A donation of ecologically significant land in Florida to The Nature Conservancy earned her an honorary lifetime membership. Many an Earth Day or other celebration around the Ithaca area saw Bobby creating and staffing information booths for one (or sometimes multiple!) conservation organizations. Bobby joined the Finger Lakes Land Trust (FLLT) at its inception, helping promote one of upstate New York's most successful land conservation organizations. In the early '90s she donated 66 acres as "trade land"—land sold with a conservation easement, with the proceeds plowed back into conservation work. Later she and her family donated another 111 acre parcel, which became the Ellis Hollow Nature Preserve. In recognition, FLLT awarded her its Conservationist of the Year in 2001.

In 2004, Bobby moved to Wake Robin in Shelburne, Vermont, from where she developed a love of the Vermont landscape, picnicked at Shelburne beach, and participated actively in her grandchildren's lives. Her other great passion in life – dance – was ever present. Whether ballet, flamenco, Hawaiian hula, or the jitter bug, Bobby was never happier than when dancing a jig or watching a performance. Gardening, culture, dance, nature, and family: these were the things that brought a smile to her face.

Bobby faced down challenging physical disabilities almost her entire life. Having sustained a traumatic spinal cord injury in childhood, her adult life saw increasing neurological degeneration leading to an ever-expanding number of physical ailments. Yet she persevered, working ceaselessly to overcome one set back after another. She was a fighter to the end, and never lost sight of the things she enjoyed doing the most.

Bobby was predeceased by her husband, parents, and brother, F. Scott Orcutt Jr.. She will be missed by many, and is survived by her children, Lynn Keeton Gamwell, Sakshi Keeton, and Bill Keeton; grandchildren, Will Keeton, Julia Keeton, and Angelika Keeton Gamwell; and nephews, Bruce Orcutt and Terry Orcutt.

In lieu of flowers, donations are appreciated to The Nature Conservancy or The Wilderness Society.
To plant trees in memory, please visit our Sympathy Store.
Published by Roanoke Times on Apr. 25, 2021.
MEMORIAL EVENTS
No memorial events are currently scheduled.
To offer your sympathy during this difficult time, you can now have memorial trees planted in a National Forest in memory of your loved one.
Funeral services provided by:
Stephen C. Gregory and Son Cremation Service
GUEST BOOK
Sponsored by Stephen C. Gregory and Son Cremation Service.
3 Entries
My sympathy goes out to all of Bobby's family in her loss. I know that the last few years have been difficult for all of you as she has grown weaker, but I am sure you all have wonderful memories of her life which I hope will comfort you in the coming days. Bobby and I were best friends during our adolescent and teen years. We lived in the same neighborhood in Blacksburg, Va. and saw each other most every day. Since we were the same age, we were in the same grade in school and shared many classes in grade school and high school. Her father and mine were both on the faculty at VPI (now Virginia Tech) . Over the years she was "adopted" by my family and I was "adopted" by hers. Many Sunday afternoons she would join my family on our Sunday afternoon drives (My papa loved to explore the back roads of our county and others) which always ended up at the Kipps farm to visit his family which was still home to his parents and two sisters. While there we would usually explore the farm and the barn where we played in the hayloft. My adventures with her family included longer trips--they took me to some state parks, I spent a week with them at the VPI research center at Mountain Lake (her father was an instructor there that summer), and a week with them in Florida one year. Bobby's accident occurred the year before our Junior year in H.S. We were all devastated when we heard the news and wondered if, or how, she would recover. However she amazed us all by being back on her feet in time for the school year and she was still active in extracurricular activities of which girl scouts was one. We shared the same troop through H.S. and have memories of camp, cookouts, camping trips to Clator Lake, etc. After high school she attended VPI and I went to Westhampton College (Univ. of Richmond). However, at the end of the first year she contacted me about an offer to be a counselor at the Va. Nature Camp run by the Garden Clubs of Va. She and I spent two weeks there for two summers and that is where she met Bill Keeton. After college and their marriage (I was maid of honor) we went our separate ways and seldom saw each other. However, we always kept in touch with Christmas cards every year. I have very fond memories of Bobby and will always remember the wonderful times we shared over the years. I will miss her as we all will. Nancy (Kipps) Hughey
Nancy (Kipps} Hughey
May 2, 2021
I met Bobby in 1991. I answered an ad to be her dog walker for Laska, a big friendly Alaskan Husky mix. I then graduated to be Bobby’s gardener for a number of years.
Bobby was always very very kind to me. At one point she gave me a substantial raise without my even asking, just because she knew that I was working well below the market rate.
I was in my 20’s and have a little bit of an old-fashioned streak. I would always call her “Mrs. Keeton”, but she insisted on me calling her “Bobby”. This went against my training, but I completely appreciated the sentiment behind her request.
I learned a lot about gardening from her and enjoyed our conversations about local environmental issues, natural phenomenon, dancing, and more. I also interacted with her children to varying degrees, and they too were solid, interesting, friendly people.
I was sorry to see her leave when she moved on from Ithaca to Vermont.
I know Bobby suffered from various physical ailments. At least her suffering is over.
-Dan Klein
Dan Klein
Friend
April 25, 2021
She was exceptionally kind, and made me feel welcome and secure whenever I came over to play with Nancy and Lynn in childhood. I send love and sympathy to Sakshi, Lynn and Bill. I will remember her always as a nurturing presence in my life.
Elizabeth Young
Friend
April 24, 2021