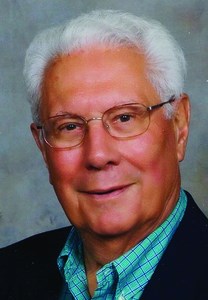 Cecil is survived by his wife of 67 years, Bettie V. Baecher; his daughters and sons-in-law, Mary Beth B. Metcalf (Phil) of Midlothian, Virginia, and Anne B. Sansom (Lee) of Manakin-Sabot, Virginia; and grandchildren, William Metcalf and Thomas Metcalf, both of Richmond, Virginia, Reid Sansom of Telluride, Colo., and Hannah Sansom of Charlotte, N.C. He is also survived by his sisters-in-law, brothers-in-law, many nieces, and nephews.

Cecil attended Norfolk Public Schools, and St. Vincent Preparatory High School in Latrobe, Pa., graduating in 1949. Cecil enjoyed his years at St. Vincent, where he participated in baseball, football, and other activities. Cecil served active duty in the U.S. Navy from 1953-1957, and the Naval Reserves from 1951-1953. Before and during Cecil's service in the Navy, he attended the Norfolk Division of William and Mary and V.P.I., now Old Dominion University, where he lettered in baseball. It was at the Norfolk Division that he met his wife, Bettie, and they were married on December 27, 1953. Cecil then attended Virginia Tech, graduating in 1957 with a Bachelor of Science degree in Business Administration. After college, he was employed by Burroughs Corporation in Roanoke, Virginia, where he represented Burroughs to financial institutions in the Roanoke Valley and Southwest, Virginia. He was employed by Burroughs from 1957-1969. Cecil then became a financial advisor for 30 years, retiring from Merrill-Lynch in 1999. Cecil and Bettie were active members of St. Mark's Lutheran Church in Roanoke, where he served as Treasurer for 24 years and served many terms on the Church Council. In the late 1960's and early 1970's, he served as President of the Roanoke Valley Virginia Tech Alumni Association and as President of the Roanoke Valley Hokie Club. He also served on the Va. Tech Student Aid Association. He always enjoyed being with family and friends attending Va. Tech sporting events. Cecil was also active in the athletic community of Roanoke. Despite not having sons, he was President of the Cave Spring Little League Association and coached youth boys' basketball. Cecil was an avid golfer and former member of Hidden Valley Country Club in Salem, Virginia. He very much enjoyed his association with his golfing friends at Hidden Valley. Cecil and Bettie enjoyed their travels with family and friends. To be closer to their daughters and their families, Cecil and Bettie relocated to Richmond in 2009. They joined Epiphany Lutheran Church where Cecil served on the Hope Ministry and the Endowment Committee. They considered their involvement at Epiphany to be very much a blessing. Above all, Cecil was devoted to his family, very much enjoying his time with his wife, daughters, sons-in law, grandchildren, and extended family.

Funeral services will be held in the Sanctuary at Epiphany Lutheran Church, 1400 Horsepen Road, Richmond, on Wednesday, March 3, 2021, at 11 a.m., with committal of his remains in the church columbarium immediately following the service. If attending, please observe COVID guidelines.

In lieu of flowers, the family requests memorial donations be made to Epiphany Lutheran Church, 1400 Horsepen Road, Richmond, VA 23226. Special thanks to the caregivers and staff at Sunrise Villas Tuckahoe for their loving care of Cecil during his illness.
To plant trees in memory, please visit our Sympathy Store.
Published by Roanoke Times on Feb. 14, 2021.
MEMORIAL EVENTS
Mar
3
Funeral service
11:00a.m.
Epiphany Lutheran Church
1400 Horsepen Road, Richmond, Virginia
GUEST BOOK
5 Entries
Blessed, sweet eternal rest to a true gentleman. Always in loving memory.
Gwen Beauchamp
February 28, 2021
So sorry for the loss of your sweet husband. So thankful you are near your family. Prayers Mary Dalton
Mary Dalton
February 15, 2021
I am just heartbroken. Cecil was a wonderful friend and mentor. Cecil never got me to like Jack Daniels with a splash but did get me to like Spot fish for breakfast. Bettie, you and Cecil were so good to me since we met in 1979. You showed real concern for me throughout my illness these many years. I love you both so much and will truly miss Cecil '0106'
angela wilson
February 14, 2021
So sad , l have known Cecil and Bettie Lou most of my life and were dear friends RIP
Ellsworth Snyder
February 14, 2021
Bettie, I´m sending sympathy and love. My you feel the peace that passes all understanding.
Sandra Whitt
February 14, 2021