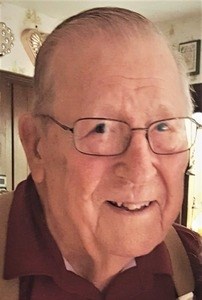 He was educated in Wythe County Schools and was a multi-sport athlete, earning varsity letters in football, baseball, and track.

Under the GI Bill, he attended and graduated from Emory and Henry College (B.A.) and Vanderbilt University (M.A.). Upon completion of his studies, he was employed by IBM in the Administrative Management Division, with assignments in Evansville, Nashville, Cleveland, Chicago, and Roanoke, Virginia, where he retired after 40 years of service.

A longtime member of Cave Spring United Methodist Church, Charlie sang in the choir and took part in many church activities, including the Thursday Morning Music Club. He was also a member of Wytheville Masonic Lodge 82, Roanoke Scottish Rite, and Kazim Shrine Temple, and held memberships in several civic organizations, including the Rotary, Exchange, and Kiwanis clubs.

The family will receive friends from 2 until 4 p.m. on Sunday, September 26, 2021, at Oakey's South Chapel. A private graveside service will be held. In lieu of flowers, contributions can be made to Cave Spring United Methodist Church, the Roanoke Rescue Mission or to the Salvation Army. Online condolences may be shared with the family at www.oakeys.com.

Published by Roanoke Times on Sep. 24, 2021.
To plant trees in memory, please visit the Sympathy Store.
MEMORIAL EVENTS
Sep
26
Visitation
2:00p.m. - 4:00p.m.
Oakey's South Chapel
4257 Brambleton Avenue, Roanoke, VA
Funeral services provided by:
Oakey’s South Chapel
MAKE A DONATION
MEMORIES & CONDOLENCES
Sponsored by Oakey’s South Chapel.
4 Entries
Sending thoughts and prayers to your family.
Sherri Patrick
Friend
September 28, 2021
Spent many hours on Charlie and Shirley's deck or in their den during our twenty years as next door neighbors. I will never forget his impact on my U.S. History students at Virginia Western CC when he spoke about his WWII experiences. The best part was his opening... singing "Bluebirds Over the White Cliffs of Dover" and his closing... how he hitch hiked across Virginia and North Carolina looking for a college that had a place for him under the new GI Bill. My students lined up to shake his hand or give him a hug! Love you, Charlie!
Peter Givens
Friend
September 28, 2021
Prayers and sympathy for all the family of Uncle Leon. He had a wonderful, full life, always pleasant to be around. One of the last of the "greatest generation " to whom we owe a lot. We will all miss him, but he is in a wonderful place, enjoying his reward and his family. Kenny and Carolina
Kenny and Carolina Smith
Family
September 26, 2021
Charlie was a good man and husband of my "extended family mother" Shirlie Mitchell Sult. He was a blessing to her and to the Mitchell family. May Charlie rest in peace, and may the family hold close to their "Charlie" memories.
David W Mayfield
September 24, 2021
Showing 1 - 4 of 4 results