Edwin Sutton Robertson
FUNERAL HOME
Givens Funeral Home
110 South Woodrum Street
Pearisburg, VA
Edwin Sutton Robertson, 41, of Pearisburg, died on Saturday, June 25, 2011. He was the son of the late Katherine St.Clair and the late Edwin Robertson. He was employed at Volvo Truck Plant in Pulaski, Va. He is survived by two sisters, Harriett Solomon, of Calvert City, Ky., and Janet Kimmel, of Billings, Mont. He was a former member of the Pearisburg Fire Department. He also attended New River Community College. A Memorial Service will be conducted at 11 a.m. on Saturday, July 2, 2011, in the Givens Funeral Chapel, Pearisburg, Va., with visitation from 10 to 11 a.m. Online condolences can be sent to the family at www. givensfuneralhome.com.

To plant trees in memory, please visit our Sympathy Store.
Published by Roanoke Times on Jun. 30, 2011.
MEMORIAL EVENTS
No memorial events are currently scheduled.
To offer your sympathy during this difficult time, you can now have memorial trees planted in a National Forest in memory of your loved one.
Funeral services provided by:
Givens Funeral Home
MAKE A DONATION
MEMORIES & CONDOLENCES
7 Entries
I hadn't ran into Robin in a while, but we were once firefighting brothers in the Pearisburg Fire Department. He will be missed and I pray for his family and friends. God Bless.
Robbie Claytor
July 2, 2011
I just want you to know that we will greatly miss Robin. We loved him and so did Mom and Dad. I'm sure they are all up there together having a wonderful reunion. I know your loss. We will miss RobinBobin.
Sherry (Lawson) Ferguson
July 2, 2011
Robin was a dear friend - a wonderful "uncle" to our daughter and a "brother" to my husband - he is sadly missed by all - take it easy brother and we will see you - Jerry, Gina and Shae Rose (Ballard, WV)
Jerry Rose
July 2, 2011
Robin you will be missed, he was a great friend to me. He would do anything for me. We had alot of good times together and I will miss him alot.
Tyrone Meadows
July 2, 2011 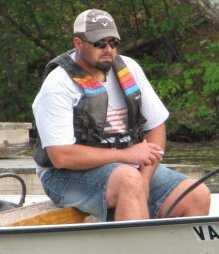 I can not begin to express the sadness that fills my heart.Over the years I have lost some of the greatest friends I have ever known, once again I have to pick the pieces up and try to move on without my buddy, my confidant, my friend. This will not be an easy journey, without Robin. He was a rock in my life, a solid foundation, that never moved or changed. He was a man who was ALWAYS there, when I felt like everyone was giving up on me, I knew he would make sure I was alright! Robin NEVER let me get down on myself, he wouldn't allow it. When things got too tough for me and I felt like everything was going wrong, Robin would say, in his soft but firm voice, "I know it looks bad now, Red, but you have to keep on keeping on. Of all I've learned in my life, the one thing I can assure you is, LIFE GOES ON!" He was right, it does go on, but its not the same without him, it will never be the same again! I love you Robin, ALWAYS & FOREVER!
Stephanie Godwin
July 2, 2011
robin was a really good person. i've known him for many years. he would do anything to help u out... he will be missed.
debra jo conley
July 1, 2011
Robin will be greatly missed. I was proud that he always called me "Mom." He always had a smile and something funny to say.
Joyce Longrie
June 30, 2011
Showing 1 - 7 of 7 results