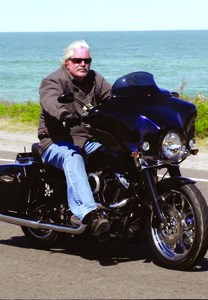 It is with great sadness that we announce the passing of Ernie Littlefield, loving husband, devoted brother, and friend to all whose lives he touched, on March 10, 2021.

Ernie retired from Medtronic as a Senior Pacemaker Sales Representative. He worked for Medtronic for 30+ years. He truly loved knowing that he was helping someone to live a better life, since he knew he worked for the best company and sold the best pacemakers made, even today! We attended many meetings, and it was always so proud to hear his colleagues talk about one of the Medtronic "legends." He was well respected in his field, and he appreciated working with the best cardiac surgeons, including Dr. Paul Frantz and the Cardiology Group at Carilion.

Ernie had many accomplishments, passions and interests that are too many to list, but some of his highlights would include his phenomenal Poker Games, his Harley Davidson, and Custom Motorcycles, and his many Classic Cars he had restored.

His poker guys will miss seeing him every Thursday evening, Wes, Scott, Rick, Wayne, Jeff, Chuck, George, and Steve. There were so many more poker guys that he played with over the last 20+ years. It was always a friendly game, but a very loud game! Thursday nights were a highlight for Ernie and the guys.

Ernie enjoyed his life while also riding his Harley Motorcycles, and then later driving his restored Classic Chevy's. He enjoyed riding his motorcycles at different events sponsored by the Harley Owners Group of Roanoke. They were always riding for a cause and raising money for different charities. Ernie always loved getting on his motorcycles to go for different rides, he did not care where they were going, as long as they were riding. He especially loved hauling his bikes to Myrtle Beach Bike Week, or even Daytona Bike Week. He could not just ride his motorcycles to the beach, because he was always hauling more than one bike, and many times, he hauled friends' bikes, and his wife's bike. The motorcycle trailer just kept growing in size!! He was more than generous, he was always letting his friends ride one of his bikes, because they wanted to join and did not have a bike. His enjoyment was not from riding alone, but from others riding along with him. As long as he was in good company, it didn't matter if it was a short ride to lunch or a long ride on the parkway. He met so many wonderful biker friends then, that are still great friends today. One of his favorite sayings "Eat to ride, and ride to eat!"

His passion for cars started at a very young age, but the car that ignited the spark, was a red, classic beauty, 1966 Pontiac convertible Catalina with a 421 engine with 3 Deuces on the tag. That car has since been sold to one of his best friends, to make room for the rest of the fleet that was to be restored and driven by Ernie and many of his friends. The next car was a 1941 Brilliant Blue Willys, a beauty of a Beast, which created a hot rod frenzy. There were more cars to be added to his collection, and you might have seen him out driving the 1947 orange Chevy, that was labeled the "pumpkin" on wheels. He did not stop there, he restored more but a few favorites were the two 1955 Belair's, one red and white and the other a beautiful Blue and White convertible with a 750 hp motor, that was sure to turn heads cruising down the road. The thrill was about seeing a car restored from start to finish, and then having the pleasure of taking it out to enjoy was what he was so passionate about. For Ernie, it was also all about having many of his close friends coming together to enjoy driving each of his cars on a cruise from the building. If you were one of those special friends that joined him in his many adventures, then you have very special memories of your good-hearted friend, Ernie Littlefield. There have been many of us talking about which car was Ernie's favorite. Hands down, it was another Pontiac, a 1965, Burgundy convertible, with a 468 engine. He had so many special car friends, that he is leaving behind. There are too many to list, but these are a few that will forever remember all the special times together… JR, Gary, Dale, Wes, Charlie, Glenn, Paul, Mark, Troy, Zac, Tim, and TJ.

Ernie was deeply grateful for the life he was able to lead. That he could play a part in transforming the lives of others through business and philanthropy gave him immense satisfaction, but that he could share his life and passions with others is what ultimately gave him the greatest joy and pleasure. He had so many charities that he gave to, but some of his favorites included, the West End Center, Healing Strides, Saint Francis of Assisi, and the Paul Ostaseski Memorial Award at the Sidewalk Art Show. His generosity was felt by so many people that he met and became friends with over the years. No favor was too big or too small, if you needed any help, Ernie was there to do anything that he could for you. Ernie will be graciously remembered for all his generosity to so many.

Please join us on Saturday, May 1, 2021, from 10 a.m. until 3 p.m. as we give Ernie the best send off as we have a Celebration of Life Cruise-in, at his building on Chapman Ave (1900 block). You do not need to have a classic car to join us in this very special day for Ernie. We will be raising funds for the West End Center, providing music, food, and sharing great memories of this very special man's life.

Memorial donations in memory of Ernie can be made to West End Center for Youth, 1223 Patterson Ave SW, Roanoke, VA 24016.

Ernie… I hope you knew you were deeply loved, and we sadly miss your warm smile and infectious laugh. Our hearts are breaking but we are all grateful to have been in your life.

5160 Peters Creek Road
To plant trees in memory, please visit our Sympathy Store.
Published by Roanoke Times on Apr. 25, 2021.
MEMORIAL EVENTS
May
1
Celebration of Life
10:00a.m. - 3:00p.m.
Ernie Littlefield's building
Chapman Ave (1900 block)
Funeral services provided by:
Simpson Funeral Home
GUEST BOOK
Sponsored by Simpson Funeral Home.
1 Entry
Bill keeps up with Roanoke better than me. I now live at North Myrtle beach. Roanoke was home for 28 years. Pandemic has made it HARD to decide if I come to Roanoke on Saturday . I would be at Ernie's celebration. He taught me my first pacemaker lesson as a cardiac nurse. Medtronic has been my life appreciation of pacemaker growth as a cardiac nurse. Medtronic has been my family's care. I believe your love for Ernie is going to be cared for on Saturday. He did have a great life! I am sooo glad we crossed paths. Be well. He WILL never leave my memory in my life. Kim and all who celebrate BE well.
Donna Althoff
April 30, 2021