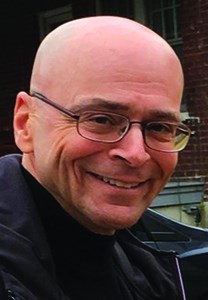 It is with great sadness that the family of James V. DiVirgilio Jr. announce his passing on Thursday, September 9, 2021.

Jim was born on May 16, 1957, in Stoneham, Massachusetts, the son of James V. DiVirgilio Sr., and Eleanor DiVirgilio. Jim grew up in Medford, Massachusetts, and graduated from Malden Catholic High School. As a young teen Jim achieved the designation of Eagle Scout in the Boy Scouts. Jim received his BA degree and his MA degree in Health Policy and Planning from Tufts University. Along with his academic achievements, Jim was actively involved in the Tufts Mountain Club, achieving a major milestone in his mountain climbing adventures by ascending Mount Temple in Banff National Park.

After receiving his degrees from Tufts, Jim went to work in Boston in health care finance. In 1980 Jim accepted a position at Blue Cross and Blue Shield of Maine.

Jim's career at BCBS of Maine was one of success and accomplishments. His commitment and dedication to his work were reflected in his rapid advancement and increasingly significant responsibilities. Jim traveled the State of Maine extensively, representing BCBS at the Maine Legislature and on consumer advisory boards throughout the state.

Along with his professional achievements, Jim was an active volunteer in the Portland Community including being on the boards of directors for both United Way and Park Danforth. Jim's most significant volunteer achievement was with Camp Fire USA. He first volunteered as a trustee, then Board Chair from 2000-2005, and later was on the Governance Committee.

Business and academic success are only part of Jim's story. A man of many and varied interests with a wonderful sense of humor and love of people, Jim's time was always spent in productive and often entertaining pursuits which included gourmet cooking as well as various athletic activities including hiking, running, biking, and pickle ball. Jim pursued an interest in martial arts, attaining the designation of 4th degree black belt in Shaolin Kenpo Karate, T'ai Chi and Qigong. Jim owned and operated the Northern Chi karate studio in Scarborough, Maine until 2007.

Jim married Deborah Poore in the summer of 1998 at their Scarborough, Maine home. Jim loved being a stepfather of Chris and Elizabeth. And one of Jim's great joys was the blessings of welcoming his six grandchildren into the world and being part of their lives. Jim and Debbie shared so many interests. Travel was among their fondest, including trips throughout the United States as well as England and Italy.

In 2007, Jim and Debbie moved to Salem, Virginia. Jim loved living in the South – the people, the music, the food and the warm and inviting atmosphere. Jim's time in Virginia was filled with wonderful times with family and friends.

In 2015, Jim was diagnosed with cancer, with recurrences and other health problems occurring frequently. Jim faced each new challenge with characteristic strength, hard work, and determination. With the incredible help and support of his health care providers, after each challenge Jim brought himself back to regaining his ability to enjoy an active, fun, fulfilling life.

Jim is survived by his loving wife, Deborah Poore of Salem; his son, Christopher Borduas of Madison, Connecticut, and his wife, Nancy, and their three children, Kasey, Gavin, and Kyle; Jim's daughter, Elizabeth Hughes of Roanoke, Virginia, and her husband, Frank, and their three children, Frankie, Mollie-Marie, and Rosie; Jim's loving cousin, Carolyn Perrotta and her children, Michaela and Nicholas; Jim's brother-in-law, Mike Poore and his wife, Candy, and their children, Matthew Poore and Kathryn Milliken; and his very special, caring, and loving friends in both Maine and Virginia. Jim was especially grateful for the loving care he received over many years from the doctors and staff at Blue Ridge Cancer Care.

A Celebration of Jim's life will be held on Sunday, September 12, 2021, at 12 p.m. in the Chapel of John M. Oakey & Son Funeral home, Salem. The family will receive friends one hour prior to the service. The Rev. Gary Kingrey will be officiating.

Jim was deeply committed to the sanctity of life. Donations in Jim's name can be made to Blue Ridge Women's Center.

Online condolences can be made by visiting the funeral home's website, www.johnmoakey.com.