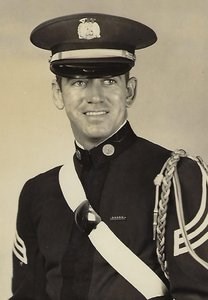 John Robert Gillespie passed away on Saturday, November 23, 2019 in Sterling, Va. He was born in Roanoke, Va. on August 5, 1934 to E. Joseph Gillespie and Margaret Dineen Gillespie. He was one of ten children and known as Bobby to his family.

John graduated from Roanoke Catholic High School and Virginia Tech and was commissioned as a 2nd Lt in the US Air Force. He later earned his Masters degree from VA Tech and also obtained his CPA certification.

He had various assignments at Columbus, Ohio, Fort Walton Beach, Fla., Nashville, Tenn., prior to completing training at Ft Benning, Ga. to become a Black Beret (Tactical Air Control Party). He then completed a tour in Vietnam.

Retiring from the service as a Lt. Colonel he spent the rest of his 35 working years at the General Accounting Office in Washington, D.C. He also taught accounting at George Mason University.

John was compassionate, generous and thoughtful. He was preceded in death by his parents; two brothers, Joseph A. and James P. (Nancy); and two sisters, Mary G. Hardie (Jack) and Cecelia G. Crotts (Ray).

A memorial service will be held at Fort Myers, Va. on Thursday, November 19, 2020, followed by internment, with a full military service, at Arlington National Cemetery.
Published by Roanoke Times on Nov. 17, 2020.
To plant trees in memory, please visit the Sympathy Store.
MEMORIAL EVENTS
To offer your sympathy during this difficult time, you can now have memorial trees planted in a National Forest in memory of your loved one.
MAKE A DONATION
MEMORIES & CONDOLENCES
4 Entries
Ladies, I met some of you when you caught up with John at the Roanoke Accounting and Auditing Conference one year. We have missed John since a closer conference became available to him. Thinking of him always brings a smile to my face, remembering his soft chuckle and twinkling eyes. John spoke of you all often and loved you fiercely. Please accept my deepest condolences for your family's great loss. A grateful nation thanks John for his service to our country.
Susan Culbertson
November 18, 2020
Lena, Bugsie and Gillespie Family I am saddened to hear of John´s passing. Although many years have passed, I remember him fondly. He lived a full life and was a very accomplished man. My prayers are with all of you for peace and comfort.
Beebe Hall Adams
November 17, 2020
Nora and Sara, so sorry to hear of the passing of your brother. My thoughts and prayers are with you and the family!
Laura Barker Corell
November 17, 2020
Sara, so sad for you and your siblings. Coming from a large family as well as you, each loss becomes greater. Our prayers are with you and yours. God bless.
Michael Simpson
November 17, 2020
Showing 1 - 4 of 4 results