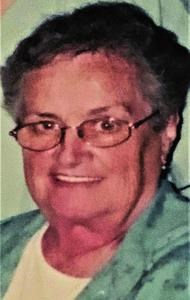 She was preceded in death by her parents, Percy and Katherine Robinson; her husband of 44 years, Robert Lee Ayers Sr.; and sister, Shirley Rothe.

She was a graduate of William Patterson University in Wayne, N.J. She taught elementary school in New Jersey and Pennsylvania before moving to Virginia in 1978 and began teaching at Colonial Elementary School in Blue Ridge where she retired in 2001 after 25 years of service. She was honored to be in the Who's Who among America's Teachers in 1992.

Kathy was devoted to the Red Hat Society for many years of laughter, dinners, and trips to plays. She was also one of the (Golden Girls) of Colonial Elementary School with her beloved friends Nancy Runyon and Belinda Saunders.

A Graveside Service will be held at 2 p.m. on Wednesday, April 28, 2021, at Glade Creek Cemetery. Online condolences may be made at www.oakeys.com.

To plant trees in memory, please visit our Sympathy Store.
Published by Roanoke Times on Apr. 27, 2021.
MEMORIAL EVENTS
Apr
28
Graveside service
2:00p.m.
Glade Creek Cemetery
Funeral services provided by:
Oakey's Funeral Home & Crematory - East Chapel
GUEST BOOK
Sponsored by Oakey's Funeral Home & Crematory - East Chapel.
5 Entries
So sorry for the loss of your mom and grandmother.
Greg and Paula Jones
April 29, 2021
I am so sorry for your loss. We just found out. You and your family are in our thoughts and prayers. If there is anything you need or I can help with please let us know.
Regina and Brian Watkins
April 28, 2021
I absolutely loved Mrs. Ayers. Never had her as a twacb at Colonial, but my brother Tyler did, and that woman did wonders if not miracles for him. Your family is in my prayers
Kara Tice
April 28, 2021
I speak for my whole family that our thoughts and prayers are with Katherine's family at this sad time of loss. Love from the Proffitt family.
Linda Proffitt Hullett
April 27, 2021
Debbie, Amy, Ryan and family, we are so sorry for your loss and we are thinking of you all at this time.
Karen & Rickey Kelley
April 27, 2021