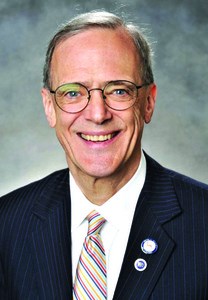 He was born on July 8, 1941, to Ashley Latane Monahan and Susanna Beeson Monahan. He was raised and educated in Manhattan, Kansas. He received his B.A. Degree from Kansas State University and M.D. Degree from the University of Kansas School of Medicine. He adopted Virginia as his home beginning with his Internship in Roanoke.

Since 1974, he had been practicing General Internal Medicine in a private medical practice, dedicated to the finest traditions of the patient-physician relationship. He was known as a careful, caring and kindly physician, and an excellent teacher and role model for medical students, interns, and residents, whom he taught in his position of Clinical Professor of Internal Medicine at both the University of Virginia School of Medicine (MD, Roanoke program), and the Virginia College of Osteopathic Medicine (DO, at Virginia Tech, Blacksburg). A Fellow of the American College of Physicians, he had received the American Medical Association's Continuing Medical Education Award every year of his practice and had published in state and national medical journals.

Dr. Monahan was an active member of the United States Navy Reserves for 30 years until his Navy retirement in 1999, serving on active duty in Vietnam and stateside from 1970 to 1972. Having attained the rank of Captain in the Medical Corps, he was again called to active duty for ten months during Operation Desert Shield/Storm in 1990 to 1991.

Dr. Monahan participated in medical politics at all levels. He held virtually all offices in his local component society, the Roanoke Valley Academy of Medicine, including Chairmanship of the Board of Directors. He was a past President of the Virginia Society of Internal Medicine. He was a member of the Medical Society of Virginia, and served as a Delegate to the annual meeting of the House of

Delegates of the MSV for 43 years. He progressed through many leadership positions in the MSV [including Vice Speaker (three years), Speaker (five years), First Vice President, President-Elect, and President (1999 to 2000)]. In the American Medical Association, he attended each annual and interim meeting for 30 years, participated actively in the Organized Medical Staff Section for 22 years, and served as a Delegate from Virginia to the AMA House of Delegates.

Dr. Monahan's life-long avocation was the study and performance of music. He enjoyed the outdoors through canoeing and hiking. He also enjoyed competitive ballroom dancing.

The family would like to thank Dr. Robert Keeley and the nurses on 8 Mountain ICU at Carilion Roanoke Memorial Hospital for their exceptional care.

We will celebrate Larry's life and Christian witness at 11 a.m. on Thursday, December 3, 2020. The memorial service will be live streamed for public attendance on the Second Presbyterian Church YouTube channel (www.youtube.com/secondpresbyterianchurchroanoke).

In lieu of flowers, donations can be made to the Second Presbyterian Church music department. In remembrance of one so dear to us, the family respectfully suggests that you cherish your freedom and thank a Veteran and that you share your blessings with someone in need. Online condolences may be shared with the family at www.oakeys.com.