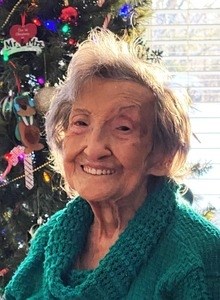 Margarite Alcazar, loving mother of three children, passed away at the age of 98, on Thursday, September 9, 2021, at the South Roanoke Nursing Home, in Roanoke, Va.

Margarite was born on March 29, 1923, in Honokaa, Hawaii to Edward and Helen Marques. In 1943 she married Wallace L. Alcazar. They raised one son, Wally Jr. and two daughters, Sallie and Dorie.

In 1939 Margarite at age 16, moved with her family to the island of Molokai, Hawaii, where her father took the position of "First Assistant Lighthouse Keeper," for the Kalaupapa lighthouse located on the north shore of the Island where the famous "Leper colony" is located. She resided there until her marriage in 1943. While there, Margarite and her family lived through the Japanese attack on the Pearl Harbor naval base on the Island of Oahu and experienced the wartime blackouts and rationing of food throughout most of the war.

After her marriage in 1943, Margarite moved with her husband to Honolulu where they raised their children. In 1973-74 she moved to California to live with her adult children where she helped raise her grandkids. Margarite lived in California for 46 years until 2020 when she relocated to Virginia to live with her youngest daughter and family for the reminder of her life.

The grandkids refer to their grandmother as, "Mammer!" And so how we all call her that, even the people who are not members of the family. Mammer loves the four "C's," Christ, her children, cats, and chocolate!

She will be cremated, and her memorial celebration service will be held at Thomas Road Baptist Church, Lynchburg, Va., with the time and date still pending. Online condolences may be shared with the family at www.oakeys.com.

Published by Roanoke Times on Sep. 15, 2021.
To plant trees in memory, please visit the Sympathy Store.
MEMORIAL EVENTS
To offer your sympathy during this difficult time, you can now have memorial trees planted in a National Forest in memory of your loved one.
Funeral services provided by:
Oakey’s South Chapel
MAKE A DONATION
MEMORIES & CONDOLENCES
Sponsored by Oakey’s South Chapel.
1 Entry
prayers for the family may she rest in peace
Sandra Haner
Work
September 16, 2021
Showing 1 - 1 of 1 results