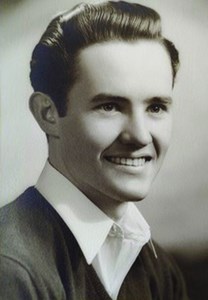 Born and raised in Angola, he leaves a small part of his heart in Africa. The rest of his heart belonged to Wanda Sue, his wife of 60 years. He was her Clark Gable. To see them dance together was like watching an old Hollywood movie. With unspoken choreography, they often danced together for no apparent reason.

Whether telling bedtime stories of Africa to Stanley, Linda and Susan or a generation later telling embellished versions to Parker, Ellery, Rachel, Kevin, Megan and Zach, family came first...Unless of course Walter Cronkite was on.

Dad told slightly inappropriate jokes, snuck candy to grandkids and could never get enough banana pudding, He was a Professor Emeritus at Virginia Tech, a master gardener, a Korean War veteran and an expert carver of all roasts, turkeys and pumpkins. He was a practical man of science with a tender spot for babies. Most recently, his great grandson, Salem.

He was a humble man and threatened consequential haunting if his accomplishments were listed here. But his time spent in Haiti is a source of great pride for us. Dad's collaborations with the Haitian Bureau of Nutrition to prevent preschool malnutrition are an amazing humanitarian contribution and cannot go unmentioned.

Food was important to Dad. Whether in his research or at his kitchen table, food was central. With that in mind, in lieu of flowers please make donations to your local food banks and think of him whenever you eat chocolate covered peanuts or pork rinds. Arrangements by McCoy Funeral Home, Blacksburg.

Published by Roanoke Times on Feb. 25, 2021.
To plant trees in memory, please visit the Sympathy Store.
MEMORIAL EVENTS
To offer your sympathy during this difficult time, you can now have memorial trees planted in a National Forest in memory of your loved one.
Funeral services provided by:
McCoy Funeral Home
MAKE A DONATION
MEMORIES & CONDOLENCES
Sponsored by McCoy Funeral Home.
11 Entries
I live in Seattle area but am originally from Allendale IL where Ryland and his brother Richard went to high school. He knew my family well and he and I have stayed in email touch for many years. Loved communicating with him, he and Dick made our tiny town of 500 proud!
Don Gher
March 2, 2021
We never got tired of hearing the stories of his time spent in Africa, or the jokes that never seemed to run out. He was so fun and truly a light in every room he entered. We will miss him dearly.
Megan and Clint Bailey
March 1, 2021
I remember Dr. Webb as a graduate student in HNF in 1976. He was kind and helpful to a clueless new VT student and Hokie. I remembered him talking of his work Haitia fondly. Later I would walk the side streets of Blacksburg when I lived in my Carriage Hill Town and wave when I saw him outside his house. As I worked as a dietitian in VT food service I met his son there as a coworker. I was saddened to hear of Dr . Webb death. But I think he did have a good and long life full of purpose, love and adventure. His persona certainly indicated that. So who can ask for more of life. My condolences to his family and friends. Mary Ann McFarland
Mary Ann McFarland
March 1, 2021
We offer our sympathy in the loss of this wonderful man. To know him was to love him. He always made us laugh and he loved a good joke. We will carry fond memories of him the rest of our days. Rest in peace Ryland...you will be missed.
Darrell and Donna Sheetz
February 27, 2021
I had the pleasure to work with Ryland. Everytime I walked into his room or saw him I always greeted him with "Hi handsome" and he would get the biggest smile. He was by far my absolute favorite resident. Although I did not know him nearly as long as I would have chosen, he will be greatly missed by all of us at CSL. Many thoughts and prayers to the family.
Reba
February 26, 2021
A very special person. He always had a story to tell each time we saw him on the golf course and one or more pink golf balls for Cindy. Played bridge with Wanda and both were so special to so many people. Wll be missed by all.
Cindy and Terry Strock
February 25, 2021
I am saddened by Ryland's passing. The warmth of his smile will be missed. He always brought us donuts whenever he came to see us. Love and prayers for the family.
Mechelle
February 25, 2021
my thoughts and prayers are with you . Had many a good times withRyland and Wanda.
Patsy Dean
February 25, 2021
Ryland was "Devil Number 4" in our golf foursome, a group that agreed to race out to Virginia Tech's golf course ASAP if any of the others telephoned. Drop everything and play. I once ran over his pull cart while pulling it up to the 10th tee. He just hammed it out and never complained. We lost a good devil and he will be missed!
Tom Garman
February 25, 2021
I am sad to hear of Ryland's passing. I built a house across the street in 1990 and was visited every day by his beautiful Iris setter Valley I believe was her name. Valley was a sneak thief she stole 3 of my Dad's right hand gloves over a 9 month period. Ryland gave me his old electric furnace when I was building my house and I used it for 20 years. I used to watch hime driving his Toyota truck up his driveway. He will be missed by all that knew him.
David Mellichamp
February 25, 2021
We came to know your parents only in the last ten years. What a lovely couple and so talented! We are sorry for your loss. Your warm memories are beautiful. You are in our prayers.
Betsy and Otto Wegman
February 25, 2021
Showing 1 - 11 of 11 results