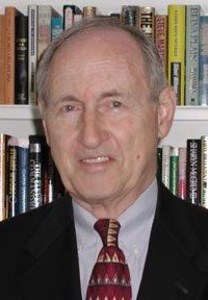 Family and Friends will celebrate Bill's life in Michigan at a later date. To leave a note for the family please visit [email protected]

On June 15, 1950 he married Shirley Alice Rowe Van Dresser and recently celebrated their 70th wedding anniversary. He was preceded in death by his older brother, Duane Van Dresser; older sisters, Leah Rudge and Adele Lindeman and their spouses. He started at Virginia Tech (VPI & SU) as the College Veterinarian in 1957 after a veterinary large animal practice in Michigan. Bill was one of the early pesticide coordinators at Virginia Tech. In 1971 he became Associate Dean for Administration for the Extension Division and later the Director of Cooperative Extension, promoted to Virginia Tech Vice President for Administration and retired in 1985. After leaving Virginia Tech he moved to Crystal City, Va. and worked with the American Veterinary Medical Foundation as a Capitol Hill Liaison as well as other position within the foundation. He fully retired and moved to Lake Oconee, Ga. in 1993.

Donations in memory of William can be made to the Michigan State University https://givingto.msu.edu/gift/index.cfm; Area to Support: "Olcha E. and William R. Van Dresser Endowed Scholarship for Veterinary Public Service".
To plant trees in memory, please visit our Sympathy Store.
Published by Roanoke Times on Nov. 25, 2020.
MEMORIAL EVENTS
No memorial events are currently scheduled.
To offer your sympathy during this difficult time, you can now have memorial trees planted in a National Forest in memory of your loved one.
Funeral services provided by:
Vining Ivy Hill Chapel
GUEST BOOK
1 Entry
My sympathy for your loss to all of you. I remember Doc always treating me as a friend. Love you all.
John Wiggert
November 26, 2020