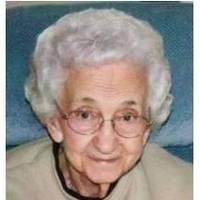 BORN
1920
DIED
2016
FUNERAL HOME
Cooper-Quiram Chapel - Genoa
202 E. Main St.
Genoa, IL
Bernice I. Duhigg 1920—2016
Bernice Ida Duhigg, 96, of Genoa, IL went to be with the Lord on Friday, October 14, 2016. She was born May 22, 1920 in Monroe Center, IL. Bernice married Leland Duhigg, May 9, 1943 and enjoyed 45 busy years with him before Leland's death July 30, 1988. When Leland returned from serving in Germany during World War II, they purchased land in Davis Junction from her mother and built their home. As a couple, they were always active in the community, as well as members of Davis Junction United Methodist Church where Bernice was a Sunday school teacher and the treasurer. Bernice was also a 4-H leader, President of the Women's Society, member of Davis Junction Belles, active in the 1975 Centennial Celebration of Davis Junction and the Centennial Celebration of the church and represented Davis Junction on the BiCentennial committee. She served as the clerk in the Davis Junction Post Office, starting in 1954 and then as Postmistress for 9 years, retiring in 1983. She was also instrumental in the formation of the Davis Junction Scott Township Historical Society and Museum, as well as being the family historian. Bernice moved to Genoa in 2006 where she enjoyed attending sports and other activities in which her great-grandchildren took part and enjoyed helping her granddaughter with her garden. She was a lifelong Cubs fan. Bernice was always proud of her family heritage. Her father, William Dickinson, came from England as a young man. He met and married her mother, Clara Davis, a teacher; daughter of Jeremiah Milton Davis and Ida Kimball Davis. Clara's grandparents were Jeremiah and Jane Davis who founded Davis Junction and Pardon and Amanda Kimball who helped settle Byron, IL. Great-grandparents, Joseph and Nancy Goodrich founded Milton, WI. She enjoyed spending time with her daughters, grandchildren, great-grandchildren, nieces, nephews, and friends. Surviving daughters, Marilyn (Ken) Belin of Genoa and Patricia Gabel of Rockford; granddaughter, Amy (Paul) Perry of Genoa; grandson, John (Frances) of Opelousas, LA; granddaughter, Stacy Carlson of Roscoe; great-grandchildren, Leea and Nolan Perry, Colby, Adriana, Syleena, and Mckenzie Gabel, Madison and Riley Carlson, and Hunter Harris; as well as many beloved nieces and nephews. Bernice was a person who loved life and made countless friends who were inspired by her joyful spirit and positive outlook. Hers was a life of faith. Our thanks to the Lord for the years we were blessed to have Mom, Grandma, and Great-Grandma in our lives. She will be greatly missed. Predeceased by parents; husband Leland; brothers, Harold (Mary), Floyd (Fern), Walter (Betty), Glen (Edna); sisters, Dorothy (Bob), Ruth (Herman), Ethel (infant), Etta (Ivan), Claribel; nieces, Ida May Zegunis, Clarice Miceli, Paula Schuld, Doris Sandik; nephew, Louis Miceli, Ron Peters; and great-grand niece, Jamie Zegunis, and great-nephew, Chuck Miceli.
Memorial service will be held at 11 a.m. on Saturday, November 19, 2016 at Olson Funeral & Cremation Services, Cooper Quiran Chapel, 202 E. Main Street, Genoa, IL with Reverend Keith Kelsey-Powell officiating. There will be a memorial visitation from 10 a.m. to 11 a.m. on Saturday, prior to the service. Inurnment will be held at Big Mound Cemetery in Davis Junction. In lieu of flowers, memorials may be made to the Davis Junction Historical Society, Davis Junction United Methodist Church, or the Davis Junction Fire Department. To send a condolence or share a memory, visit olsonfh.com.
Published by Rockford Register Star on Oct. 28, 2016.
To plant trees in memory, please visit the Sympathy Store.
MEMORIAL EVENTS
Nov
19
Visitation
10:00a.m. - 11:00a.m.
Cooper-Quiram Chapel - Genoa
202 E. Main St., Genoa, IL
Nov
19
Memorial service
11:00a.m.
Cooper-Quiram Chapel - Genoa
202 E. Main St., Genoa, IL
Nov
19
Inurnment
Big Mound Cemetery
Davis Junction, IL
Funeral services provided by:
Cooper-Quiram Chapel - Genoa
MAKE A DONATION
MEMORIES & CONDOLENCES
Sponsored by Cooper-Quiram Chapel - Genoa Olson Funeral & Cremation Services - Cooper-Quiram Chapel - Genoa.
7 Entries
It was sad to learn that Bernice died, but it was heartening to read about a life lived so fully. Our thoughts are with you, Marilyn, Amy and family.
Love,
Christi and Ron
Christi Slavenas
October 29, 2016
Sending my thoughts and prayers to the family or Bernice Duhigg.
Adeline Quick
October 29, 2016
May all of you find comfort. Prayers to everyone that enjoyed Bernice life.
Julie Dulgar Christian
October 29, 2016
My sincere condolences to Bernice family. May God "who comforts us in all our trials" (2 Cor 1:4) comfort you and your family at such a difficult time. I know God will help you to endure.Please find comfort in knowing that God understands your grief of loosing Bernice and He cares for you (1Peter 5 :7).
Monica
October 28, 2016
Marilyn and Family, Sorry for your loss. You our in our prayers and thoughts.
Bill nd Carol Cleveland
October 28, 2016
I looked forward to visiting with Bernice at the Davis Junction luncheons because she was so interested in everyone she knew. She made you feel special. She was a special lady! My sympathy to all of her family. Harriet Lichty
Harriet Lichty
October 28, 2016
So sorry to hear of Bernice's passing, she and Leland were our neighbors when we lived in Davis Junction, She will be missed by all.
Nancy Gill
October 28, 2016
Showing 1 - 7 of 7 results