LEROY JULIUS ARNOLD, 79 COPPERAS COVE, Texas - LeRoy Julius Arnold, Sergeant Major, U.S. Army (ret.), 79, went to be with the Lord on Wednesday, Oct. 12, 2011, in Copperas Cove. Sergeant Major Arnold will be lovingly remembered as a patriot, husband, father and committed follower of Jesus Christ. He was uncommonly devoted to his country. His military service began at age 15; convincing his uncle to sign for him, when he volunteered with the U.S. Army during the Korean War. With great personal sacrifice, his service spanned the next 25 years to include guarding every wall of freedom and fighting in every conflict his country was involved in during his enlistment. SGM Arnold lived his entire life by Homer's creed. Born Sept. 13, 1932, in Lake Crystal, Minn., son of Daniel and Abbie (Julius) Arnold. Married Clara Abbott on July 1, 1950, in St. Johns, Newfoundland Canada. Moving to Rockford, Ill., after retiring from the Army in 1976, SGM Arnold joined the Rockford School District to teach Jr. R.O.T.C. He was the Head Jr. R.O.T.C. instructor at four Rockford High Schools over the next 10 years (West, East, Guilford and Auburn). SGM Arnold was most proud to have served with The 1st Infantry Division in Vietnam 1965-1966, where he earned the Combat Infantry Badge and The Army Commendation Metal. His Army Commendation Medal for Meritorious Service, in Korea with the 2nd Infantry Division, best describes the character possessed by those who knew him, unlimited energy, aggressiveness, dedication to duty. His bearing was always that of a professional soldier. He spoke often, many times with tears, about his becoming a Christian at the age of 49. Of his Savior he would say "when I found Jesus, I found what I had been looking for my whole life". SGM Arnold and his wife, Clara were members of Elim Baptist Church in Rockford. He was well known by many of his friends as a Green Bay "Packer Backer". SGM Arnold led Promise Keepers meetings in Columbus, Wis., and was a Gideon for 28 years, serving God in the Winn-Rock Rockford Camp. His selflessness kindness and positive energy for his Savior touched all who knew him. Survived by his loving wife and best friend of 61 years, Clara; sister, Mildred Janisch of Beaver Dam, Wis.; brother, Gary Bakke of Madelia Minn.; sister, Twyla Wiggins of Tulsa, Okla.; daughters, Debbie (Jay) Montange of San Antonio and Sandy (Kenneth) Simmons of Copperas Cove; sons, Daniel (Linda) Arnold (Road Ranger) of Rockford and Clayton (Debbie) Arnold of Roscoe, Ill.; nine grandchildren; and four great-grandchildren. The family wishes to extend their gratitude to Visiting Angels, Texas Home Hospice Care and Wind Crest Nursing Home. The Arnold family will receive guests from 6 to 8 p.m. Sunday, Oct. 16, at Crawford-Bowers Funeral Home in Copperas Cove. His body will be put to rest in a private burial ceremony Monday, Oct. 17, at Central Texas State Veterans Cemetery in Killeen with full Military Honors. Memorial service at 7 p.m. Friday, Nov. 4, at Elim Baptist Church, 5500 Newburg Road, Rockford, with a family visitation from 5:30 p.m. to time of service. The family asks that all memorials be made to The Gideon Memorial Bible Fund in SGM Arnold's name.
To plant trees in memory, please visit our Sympathy Store.
Published by Rockford Register Star from Oct. 15 to Oct. 16, 2011.
MEMORIAL EVENTS
No memorial events are currently scheduled.
To offer your sympathy during this difficult time, you can now have memorial trees planted in a National Forest in memory of your loved one.
MEMORIES & CONDOLENCES
21 Entries
Leroy Arnold was my ROTC instructor at Guilford High School in the late 1970s. He was a friend and a mentor. My brothers, Jim, Dave and Paul as well as my wife, Linda were all deeply influenced by him too. I remember and use the leadership skills he taught me in my classes with him. They were simple lessons taught by a deceptively simple man. It took me awhile to figure out that simple good old boy act. Leroy was a great man and few teachers measure up to his insight, commitment and passion. You are loved and sorely missed, Leroy.
Walt Hoshaw
November 6, 2011
I am so saddened to hear of your loss Mrs Arnold. SGM Arnold was a great SAI at West High School. He was my mentor. He played a strong role in shaping me into a successful Army JROTC Cadet and to my successful Air Force Career. I have thought of SGM Arnold many times. I wish I had known SGM Arnold and family lived so close to me in Texas. You and your family are in my thoughts and prayers. Robert Baker, SMSGT USAF (Ret).
Robert Baker
October 30, 2011
Dear Aunt Clara and family,
Growing up I remember always telling everyone about my Uncle Leroy who served our country and all the places he had been and lived. I looked at him as such a strong man with a heart of gold. He was always interested in your life and what was going on with you
Kari Kasten
October 24, 2011
Clara and Family,

We were so sorry to hear of your loss our thoughts are with you at this time. Many fond memories of "Tag Day's" run our of our dining room.
Jeff, Michelle, Kyle and Lauren Granskog
October 20, 2011
Sgt Mgr Arnold was a strong pillar during my youth as he was my ROTC instructor - I will alway remember him! Rest in Peace and God Bless
Victoria (Lipps) Girard
Victoria Girard
October 19, 2011
Luke 8:49-56 is an encouraging account to consider for your family.
October 19, 2011
Dad, you will remain deep within my heart and I will miss you all the days of my life. I know you are waiting with open arms for me.
Debbie
October 18, 2011
our prayers are with you AUNT CLARA.sorry to hear about UNLCE RED. condolence's to you and your family. DARRELL AND FAMILY
Darrell Mackey
October 18, 2011
Aunt Clara & Family,so sorry to hear of uncle Red's passing. Our thoughts and prayers are with you all .Trudy Pike(Mackey)Dave & Brooklyn.
Trudy Pike
October 17, 2011
Sandy, The love you and your father shared was wonderful. Keep his memory alive always by keeping him in your heart. His love and spirit lives on in you and your boys. God blessed you with a wonderful father and now they are together watching over you and your family.
Patty Reding
October 17, 2011
Had the privelidge of knowing Red and Shorty while serving with the US Army in Mannheim, Germany and Fort Hood Texas during the 7o's. Red was the Master of Triangle Lodge and I was his Senior Warden and a few years later Red was the First Sergeant of a Signal Company when I was the Command Sergeant Major. Never knew a more upright soldier and friend, solid citizen and great guy. He'll be fondly remembered and missed by many. Danne and I send our sincere condolences to the family..
Bob & Danne Van Horn, Long Beach, California
Robert Van Horn
October 17, 2011
Sandy,we love you and family .The LORD needed LeRoy to help him up in Heaven ,so now his work on Earth is done.He's is with his Savior,God Bless you all
Bobbie Simmons
October 16, 2011
Sandy & Jimmy Carson
October 15, 2011
We have known LeRoy and Clara since 1972, and have shared many good times together. Over all these years we always kept in touch. We lost a very good friend. Our thoughts and prayers are with Clara and the Family.

Inge Guerra
Inge Guerra
October 15, 2011
My Dear Friend Leroy.... The time has come for me to say goodbye to a good and faithful friend. I am saddened because I will never see my dear friend again, but I know that you are finally at peace. I will always remember you, and you will live in my heart forever. Goodbye my friend... 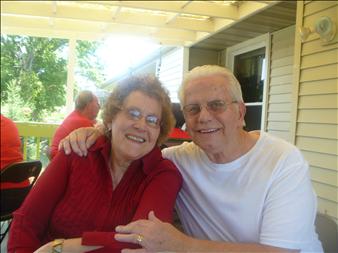 Clara, Dan, Debbie, Sandy, and Clay,
We count the years we have known your family as an extraordinary blessing! Red took his position as head of the family very serious, and continually showed to each of us a portrait of what it means to be a follower of Jesus Christ. LaVerne and I will miss our wonderful times together. Red is smiling now as he is beholding the face of Jesus! God is our refuge and strength in times of need.

We love you all.
Larry and LaVerne Barlow
Larry Barlow
October 15, 2011
Sandy, what a wonderful tribute and obituary for your father....I just LOVED the 4th photo....the one when he was young teenager with obvious red hair and freckles ...even though it was a black & white photo. I know you will miss him but I'm so glad you have such wonderful memories! Thinking of you and your family....Love, Cathey Bradfute Clark
Cathey Clark
October 14, 2011
Sandy, Clara, Debbie and family.. We are sorry to hear of your dads passing over but rejoicing he is in the arms of his loving savior, Jesus. He was such a delight and always had a smile and hug for us. We so enjoyed all the times we were able to worship and do bible studies with him at Hillside church. Your dads eyes always lit up when he was talking about his family and it was so
obvious the great love he had for all of you. May you all be comforted during your time of grief by a multitude of friends that
dearly love you and especially by the Holy Comforter. I love
you my dear friend.
Diane Guidash
October 14, 2011
Sandy, my love and prayers are with you and your family! May God, wrap you in his loving arms and bring you comfort during this difficult time.
Denise Dabney
October 14, 2011
Debbie and Family, sorry to hear about your loss. He's out of pain and in a better place. You will miss him, but he's in heaven looking down over all of you.
Debbie Llacuna
October 14, 2011
Dear Aunt Clara and all the family,
We were so sad to hear of uncle Reds passing.We are sure he is at peace in his new home.Uncle Red leaves our family with great memories of our visits in Newfoundland and in the US.We will hold on to our memoeries of our times shared and will hold you all in our prayers.We will really try and make the trip to Rockford for his services.Take care and God Bless
Sending All Our Love,Robert,Karen,David,Robbie and Nikita Stapleton
Karen Stapleton
October 14, 2011
Showing 1 - 21 of 21 results