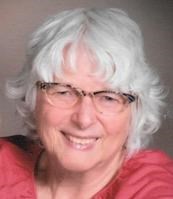 BORN
1950
DIED
2021
ABOUT
Evanston Township High School
Mardon Matthews Blomgren 1950—2021
On Wednesday June 9, 2021, Mardon "Mardie" Matthews Blomgren, loving wife, mother, grandmother, and more, passed away at age 71 from breast cancer surrounded by her family at home.
Mardie was born Mardon Matthews on March 22, 1950 in Detroit, MI to Charles and Barbara (White) Matthews. Her family moved to Buffalo, NY and settled in Evanston, IL, where she grew up the eldest of five children. She graduated from Evanston Township High School in 1968 and studied music at the University of Wisconsin-Madison, earning her BA in 1972.
Mardie married Stephen (Steve) Blomgren, the love of her life, on her birthday, March 22, 1975. After living in Loves Park they moved to their current home of 44 years in Rockford. Together, they raised and devoted themselves to two daughters, Colleen and Valerie.
Mardie began her career in public education as a music teacher and then began teaching private piano lessons, filling her home with music. Later she taught as a substitute music teacher and served as a special education paraprofessional in the Rockford Public School District before retiring in 2016. Mardie was an active member of the Unitarian Universalist Church of Rockford and sang in its choir. Mardie supported many causes that promoted a more just and peaceful world.
Mardie lived a rich life full of family and friends that she loved dearly. She was a skilled pianist and loved music across many genres from Debussy to Carole King. She made family camping and canoeing excursions experiences of luxury and tranquility. There was no adventure she would shy away from, from skiing in the Rocky Mountains, to swimming and water skiing in chilly Lake Michigan, to winter tent camping in snowy Door County, WI. Mardie endured several mental and physical health conditions throughout her life and became known for her eternal optimism and strength through these hardships. She will be dearly missed for her love, affection, and moments of impulse and laughter.
Mardie was preceded in death by her parents, Charles and Barbara Matthews. She is survived by her husband Stephen Blomgren, daughter Colleen (Derek) Johnson of Madison WI, daughter Valerie Blomgren (Clark Gibson) of Tulsa OK; granddaughters Dahlia and Annika Johnson; siblings Mary Metallo, Amy Neuwirth, Doron (Michael) Kleinman, and Charles Matthews III; step-mother Nancy Matthews; sisters-in law Beverly Nielsen and Sandra Eyler; and a large extended family from across the country.
A memorial service will be held on Saturday September 18th at 1:00 p.m. at the Unitarian Universalist Church of Rockford, 4848 Turner St. Visit tinyurl.com/mardieblomgren for information on making gifts in lieu of flowers to the Unitarian Universalist Church of Rockford, Mendelssohn Performing Art Center, and the UW-Madison Odyssey Project. Remembrances and condolences may be shared via this site.
Published by Rockford Register Star from Jun. 12 to Jun. 14, 2021.
To plant trees in memory, please visit the Sympathy Store.
MEMORIAL EVENTS
Sep
18
Memorial service
1:00p.m.
Unitarian Universalist Church
4848 Turner St., Rockford, IL
MAKE A DONATION
MEMORIES & CONDOLENCES
2 Entries
A beautiful tribute to your mom's life, Colleen. Thinking of you and your family at this most difficult time and praying for peace in your hearts. With deepest sympathy, Lauren
Lauren Surovi
September 17, 2021
I remember Mardon because she always had nice things to say about other people, always listened, offered encouragement, the strength to keep going to get up and do something. When she played the piano everyone in the conversation would lighten up.

With thoughtful words of encouragement; she had the nicest laugh that would build up and soften your emotional being. She was a good student and lived up to her ideals, dreams and her own goals.

There was no way to describe this loss; however, everyone she knew would always remember her, especially loved ones, friends and family.

She was thoughtful to remember me on many occasions: the many times we all gathered together for something to eat, and recipes she shared with us. We will be delighted to see her again with fond remembrances of the times we shared.

We will be thinking of her in the days to come with all our treasured moments.
Amy Matthews Neuwirth
Sister
June 21, 2021
Showing 1 - 2 of 2 results