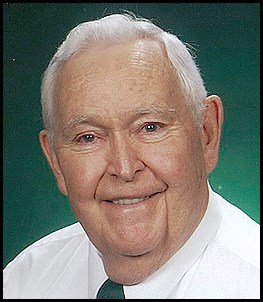 FUNERAL HOME
Green Valley Mortuary
3004 Alexandrite Drive
Rescue, CA
CAREY, Ed
One of the Last of the
Gold Miners and 1st of the
Rocket Test Engineers
Ed Carey, the last surviving member of the Bill Carey family - William H. Carey Senior and Jane Carey - lost his long battle with leukemia on June 2, 2009 at the age of 80. Ed was born on September 7, 1928 in Baker City, Oregon. Ed began his career working in the Idaho Maryland gold mine in Grass Valley until the mine closed in 1956. He then embarked on a new career working as an engineer at Aerojet, pioneering the fields of missile and space jet propulsion. He served Aerojet for 38 years and held many key positions from Test Engineer to Project Manager to Facility Manager. His successes in missile and jet propulsion included developmental production testing of the Titan I, Titan II, Titan III and Able Star Delta (launch missiles); and the main engine for the Apollo Command/ Service Module - one of the spacecraft utilized for the Apollo program to land astronauts on the Moon. He completed his career at Aerojet as the Facility Manager. He was preceded in death by his youngest son, John and survived by his wife, Crystal and children, Susan Ward, Michael Carey, Andrew Carey, Mary Anne Taylor, Lucy James, Kathleen Dainat and Bill Carey. He is also survived by eleven grandchildren and eleven great-grandchildren. Vigil will be held on June 7 at 7:00pm at Green Valley Mortuary, Cameron Park. Memorial service will be held on June 8 at 10:00am at the Holy Trinity Church, El Dorado Hills. 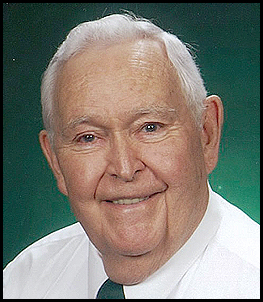 Published by The Sacramento Bee from Jun. 5 to Jun. 7, 2009.
To plant trees in memory, please visit the Sympathy Store.
MEMORIAL EVENTS
To offer your sympathy during this difficult time, you can now have memorial trees planted in a National Forest in memory of your loved one.
Funeral services provided by:
Green Valley Mortuary
MAKE A DONATION
MEMORIES & CONDOLENCES
8 Entries
I believe my husband Joe and I met Ed at Michael's wedding in Sacramento many years ago. My prayers are with you all. Ginny Kiely
Ginny Kiely
February 18, 2010
Ed was a good friend and peer, I worked with him for many years. Ed never ceased to amaze me with his perception and knowledge about
all the things, going on around him.
Rest in peace my friend. Jim Hand.
July 7, 2009
I attended mass with Ed and Crystal, but came to know Ed during the construction of Holy Trinity Church in El Dorado Hills. He was a dedicated team member during that process.

I extend my sympathy and prayers to Ed's family.
Liz Birmingham
June 9, 2009
Ed was my grandfather. My grandfather told me many stories about his years at aerojet. The most fond memory I have of my grandfather is when he was telling me about my great grandfather Bill. I loved to spend time with my grandparents in the garden working on their memorial for their lost son Jonny.
Michael S. Carey
June 6, 2009
Ed Carey
As noted Ed had many accomplishments in his work carrier and his resume is very extensive. I find his accomplishments as a farther go much further.
Being his youngest son I knew him from a different point of view. “Pop” was always there, be it a skinned knee or to chase away the boogie man. When you needed advice, a shoulder or a hand you could count on him. Honest and trustworthy would best describe him.
Being an avid cyclist, professional wood worker, husband and farther everything I do today was taught to me by my dad.
Let’s all cry because we miss him, laugh at the stories he used to tell us and then follow his example and go out and do the very best we can! “The Carey Way”
William L Carey
June 6, 2009
Ed was a good father and grandfather. He sang to his new grand-daughter Katie and calmed her down when no one else could! Tora Lora Lora!
"Too-ra-loo-ra-loo-ral, Too-ra-loo-ra-li,
Too-ra-loo-ra-loo-ral, hush now, don't you cry!
Too-ra-loo-ra-loo-ral, Too-ra-loo-ra-li,
Too-ra-loo-ra-loo-ral, that's an Irish lullaby."

Oft in dreams I wander
To that cot again,
I feel her arms a-huggin' me
As when she held me then.
And I hear her voice a -hummin'
To me as in days of yore,
When she used to rock me fast asleep
Outside the cabin door.
Doug Brown
June 5, 2009
Ed was a friend.Iworked for him for many years . First in the liquid test area and later in maintance.He will not be forgot.As always Red Atchley
Red Atchley
June 5, 2009
Please accept my deepest sympathies.

I worked a lot with Ed at Aerojet in my early early years as a rocket test engineer. Ed was the "engineer's engineer" in our department and helped provide me with a lot of the work tools and habits that I still use today. I also remember how important his family was and how he would always provide us with an interesting daily story on what was going on with his family life.
Bob Keenan
June 5, 2009
Showing 1 - 8 of 8 results