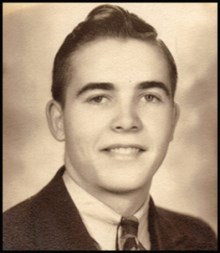 FUNERAL HOME
East Lawn
5757 Greenback Lane
Sacramento, CA
STOECKER, Floyd 'Jack'
Passed away June 26, 2013 at Mercy San Juan Hospital in Carmichael after pulling off his final miracle. He is survived by Ruby, his loving wife of 68 years; daughter Shannon (Stoecker) Cary & her husband Steve; and brother Vernon Stoecker & his wife Marge. Jack was preceded in death by by parents, Carl & Bertha Stoecker; brother Arnold Stoecker & his wife Fern; and sister Velma Dixon. He was born Sept. 18, 1922 in Monument, KS. Jack attended Dodge City Jr. College where he played basketball & football. He started as a stock boy for Kinney Shoes in 1944 and retired as a District Manager in 1990. Having moved around the country with Kinney, he settled his family in Sacramento in 1967. He enjoyed golf- ing, woodworking, catching up with old friends, and he told a story so well it would have made Mark Twain proud. There will be a Celebration of Life on Friday, July 12th at 11:00 AM at East Lawn Mortuary, 5757 Greenback Ln., Sacramento, CA 95841. In lieu of flowers, please make donations to The American Heart Association.
Published by The Sacramento Bee on Jul. 7, 2013.
To plant trees in memory, please visit the Sympathy Store.
MEMORIAL EVENTS
To offer your sympathy during this difficult time, you can now have memorial trees planted in a National Forest in memory of your loved one.
Funeral services provided by:
East Lawn
MAKE A DONATION
Please consider a donation as requested by the family.
MEMORIES & CONDOLENCES
Sponsored by anonymous.
72 Entries
"Jack, I want you to know that your lovely bride Ruby has been a delight for all her nieces and nephews. At age 95 she is as vibrant as ever. I know she's looking forward to seeing you again. We send our love Mary and Jeff
Mary Sayre
Family
July 3, 2021
Merry Christmas, Dad. You were in our thoughts as we celebrated another year together.

Jeff and I send our love,
Mary
February 16, 2016
Happy Valentines Day just to say You are the love of my life. Miss you. Rubie
V
February 14, 2016
Christmas 1942 we met ffell in love then married and had almost 73 years of so much love and happiness. I am so grateful. So this 3 year without I give my lobe always. Rubie
December 24, 2015
I really wish you were here this holiday time of year as I so miss our being together. You are the love of my life. Many kisses. Rubie 2015
November 27, 2015
Happy 93rd BIRTHDAY Jack, Miss and Love so much. Rubie
September 18, 2015
Jack, I just miss and love you so so much. Rubie 9/7/15
September 7, 2015
Jack. 71yrs ago 8/27/44 would be our anniversary.Our deep love and devotion made us strong. I wish you Happy Anniversary.LOTS OF love kISSES. Rubie
August 26, 2015
Jack, You've been gone 2 long years. I treasure our happiness and love of each other. My heart is filled with great memories and joy in our family. I talk to you alot. You are so loved and missed. Rubie ck,
June 22, 2015
Jack,Happy New Year, Love and miss you so much. Love Always. Rubie 2015
January 1, 2015
Merry Christmas to Jack, all our angels and Rubie too! We love you.


What a privilege to be your niece . You and Jack were and are such positive people. I loved hearing about how Jack encouraged young people to excell. Ruby you are inspirational! Our time together at the HarrisReunion was too short! Your knowledge of history and dates was remarkable. You are a lovely lady inside and out ... No wonder Jack loved you!

I wasn't very old when I met your dad on the Harris farm but I remember how important he made each one of us feel as he listened to us and how kind his eyes were. As I recall he also had a very warm voice .... all good memories for a little kid !

Even though you will miss him every day he's in a wonderful place surrounded by special angels.

We send you our love,
Mary (niece) and Jeff Sayre
mary sayre
July 22, 2013
I'd reiterate "worlds greatest uncle". I remember many things about Jack, but one story especially from grandma Harris. When she would fry chicken, Jack would say,"just fry me a chicken and give me a jar of bread and butter pickles and I'm set." Also I remember him singing, "you got the money honey, I got the time." We'll really miss him. Love Jan and Sid
July 13, 2013
Ruby & Shannon so sorry to hear of your loss. May God comfort you at this time.
Leta Hale McMaster Gebler. Worked for Mr. Wills in the Highland Store.
July 13, 2013
Worlds greatest Uncle,Love Marshall
July 8, 2013
Love YOU Always,
xoxoxoxoxoxoxo's
~ <3 ~ ;)
Shannon Cary
July 7, 2013
Love YOU Always,
xoxoxoxo's
~ <3 ~ ;)
Shannon Cary
July 7, 2013
Showing 1 - 72 of 72 results