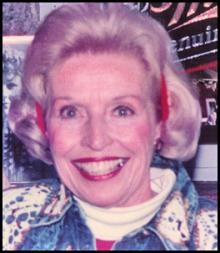 FUNERAL HOME
Walton's Funerals & Cremations - Ross, Burke & Knobel
2155 Kietzke Lane
Reno, NV
WILSON, Jane B. (Lowe)
83, of Gardnerville, Nevada, passed away at home with loving family by her side on February 27, 2014. Jane was born in Connecticut where she lived with her parents, Inez and Leon F. Baker Jr., and younger brother and sister through her high school graduation in Fairfield. There she began a lifelong love of music playing both piano and also the clarinet in the marching band. As senior class president their graduation party was at her house. She was always one to volunteer and to organize gatherings and events. The family moved to Topeka, Kansas where she was enrolled at Kansas University and graduated a Jayhawk and Kappa Alpha Theta. After graduation, she was married to Harold M. Lowe, MD and eventually settled in California, La Jolla then Sacramento, raising children and encouraging all of their activities. She was very involved in community service and generously shared her time and energy with many different organizations along the way. Jane married Bryce Wilson of Glenbrook, Nevada in 1975. Bryce's two daughters were welcomed as beloved additions to Jane's family. In 1980 she began a 23 year real estate career with Glenbrook Realty, then Chase International. Very active in politics during the Laxalt/Reagan years she served as Vice Chairman of the Nevada State Republican Party under Frank Fahrenkopf and she and husband Bryce worked tirelessly traveling around the state in their RV. She also served as a delegate to the 1980 National Convention in Detroit and attended the Ronald Reagan inaugural events. Her appreciation of great music was evident in her support of both the Reno Philharmonic and Nevada Opera and she tried never to miss a performance. She so loved living at Lake Tahoe. It was hard to leave the Lake, but after the last 25 years of living in the Carson Valley she grew to love the 'valley' even more. Nonetheless, family was her greatest joy in life and nothing delighted her more than spending time with her adored children and grandchildren. Jane's loving heart and deep abiding faith in God never waivered. Everyone she met was drawn to her bright light, contagious smile, unwavering enthusiasm and positive spirit. Words cannot express how much her smiling face will be missed by all who knew her.Jane is preceded in death by her husband Bryce Wilson, parents Inez and Leon F. Baker Jr. and brother-in-law Ralph Steil. She is survived by her 4 daughters and son; Jennifer Hurley, Emily Orrill (Jon), Lynn Rivard, Janet Warner, Jeffrey Lowe (Julie), her 10 grandchildren Dines Francese (Lila), Parker Stremmel (Megan), Serena Rivard, Kristina Orrill, Sage Rivard, Tom Hurley, David Warner, Amanda Orrill, Bryce Warner, and Braden Lowe, and 1 great-grandchild Fliss Francese, brother: David P. Baker (Jane), sister: Marjorie B. Steil, nieces and nephews. A Celebration of Life will be held at Ross, Burke and Knobel Mortuary at 2155 Kietzke Lane in Reno on Saturday, August 16, 2014 at 11:00am. Please visit the website for service information and to send condolences to the family.
www.waltonsfuneralhomes.com
Published by The Sacramento Bee on Mar. 30, 2014.
To plant trees in memory, please visit the Sympathy Store.
MEMORIAL EVENTS
To offer your sympathy during this difficult time, you can now have memorial trees planted in a National Forest in memory of your loved one.
Funeral services provided by:
Walton's Funerals & Cremations - Ross, Burke & Knobel
MAKE A DONATION
MEMORIES & CONDOLENCES
0 Entries
Be the first to post a memory or condolences.