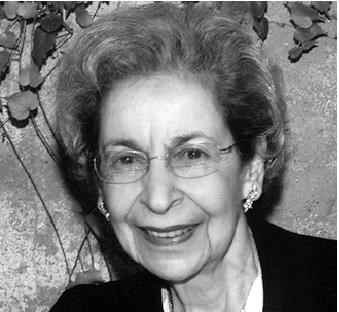 FUNERAL HOME
St. Mary Cemetery and Funeral Center
6700 21st Ave.
Sacramento, CA
On October 3rd, in Sacramento, CA, Leona Mary Lukenbill passed peacefully into the loving arms of her Creator, at 97 years of age. Born in Williston, North Dakota to David and Sadie Kalil, Leona moved to Sacramento in 1938 to study at Sacramento City College while living with her stepsister Celia Zine and brother Ed Kalil. She married Frank Lukenbill in Denver, Colorado in 1948 and they returned to Sacramento where they started a business together and worked tirelessly to raise their five children. Leona began keeping the books for the family business and then in the mid-sixties started a long career with the State of California, retiring in 1985. Leona volunteered for several decades with the Mercy Hospital Guild at Mercy General Hospital on J Street in Sacramento along with her sister, Roseline Kalil. Leona, "Lee" to her friends and family, was well known for her determined spirit and her love of dancing. She was pre-ceded in death by her husband of 60 years, Frank Lukenbill, in 2007. She is survived by her children, Gregg (Sally), Lynne (Jim), Renee, Gaye (Randy), and Terese, eight grandchildren, Jake, Molly, Ben, Brian, Tommy, Mariah, Frankie Lee and Johnnie June (JJ), and ten great-grand-children. A Memorial Mass at the new St. Mary's Cemetery and Funeral Center, 6509 Fruitridge Rd., Sacramento, will be held on Monday, October 16 at 11:30 a.m. A viewing beginning at 9:00 a.m. and rosary at 11:00 will precede the Mass. Memorial contributions may be made in Lee's honor to the Alzheimer's Association. To donate by mail, send a check to: Alzheimer's Association, P.O. Box 96011, Washington, D.C. 20090-6011. To donate by phone, call 800.272.3900. Arrangements by St. Mary's Cemetery and Funeral Center.
Published by The Sacramento Bee from Oct. 11 to Oct. 15, 2017.
To plant trees in memory, please visit the Sympathy Store.
MEMORIAL EVENTS
Oct
16
Viewing
9:00a.m.
St. Mary's Cemetery and Funeral Center
6509 Fruitridge Rd., Sacramento, CA
Oct
16
Rosary
11:00a.m.
St. Mary's Cemetery and Funeral Center
6509 Fruitridge Rd., Sacramento, CA
Oct
16
Memorial Mass
11:30a.m.
St. Mary's Cemetery and Funeral Center
6509 Fruitridge Rd., Sacramento, CA
Funeral services provided by:
St. Mary Cemetery and Funeral Center
MAKE A DONATION
MEMORIES & CONDOLENCES
8 Entries
Hello Terese, I'm sorry to hear about your mother (and father, it's been a while). I really enjoyed getting to meet and talk with both of your parents when I would come over to visit. I hope things are well with you otherwise. Take care, and feel free to e-mail me. [email protected]
Jeff Conway
Friend
March 20, 2018
Terese, I just read this in the paper. I am so sorry I missed the funeral. My deepest sympathies to you and your family.
DiAnne Evans-Armstrong
Friend
October 17, 2017
I am so very very sorry to hear about your Mom! You will all be in my thoughts and my prayers! God Bless you and Love you!
Robbie Brine
October 13, 2017
I have so many wonderful memories of my time spent at the Lukenbill home. Mrs. Lukenbill was always welcoming and not shy to give her opinion on matters. I appreciated that! I fondly remember she and aunt Rosie as quite a dynamic duo. My thoughts are with all of you as you gather to celebrate a life well lived.
Mary Rita Ely
October 13, 2017
"What is lovely never dies, but passes into another loveliness, star-dust or sea-foam, flower or winged air." by Thomas Bailey Aldrich
Mele Huffman
October 12, 2017
My mother Marion Gardner always enjoyed riding to work together with Lee on the bus - #1 route - that they would catch on McKinley Blvd to downtown each day. I'm so very sorry to hear of your loss.
Debbie Gardner Soto
Debbie Soto
October 12, 2017
We love you Grandma. We will miss you dearly and I know that you will always be with us in spirit. Love you truly Grams, Mol pie
October 11, 2017
I was so lucky and blessed to have you as my mother, best friend, counselor and supporter. You will always be in my heart and I will love and miss you forever.
Renee Lukenbill
October 11, 2017
Showing 1 - 8 of 8 results