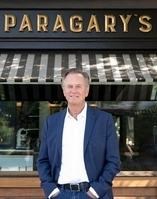 Randy Paragary
August 14, 2021
Sacramento, California - A Life Well Lived
Death does not get the last word on a life well lived. The family and his legion of friends have a difficult time accepting that Randy Paragary is gone. The clocks will tell time a little differently for a while, restaurants will appear bleaker, bars not as jovial, the laughter not as easy, the tears too accessible, and someone who made a life's mission out of enhancing Sacramento hospitality is being missed by a community he changed considerably.
Randy Earl Paragary lost his brief battle with pancreatic cancer on August 14, 2021. Randy didn't lose often, and he ended his time of vigor and intensity on this earth in the special care of the family he cherished. His children, Lisa and Sam, are his most remarkable legacy and brought him his greatest satisfaction. He found extraordinary happiness in his personal life and the business endeavors he shared with his wife of almost 28 years, Stacy. Though strong on their own, together they were lightening, fun, loving, clever, connected by a touch and a glance, and a mutual source of endless inspiration.
Randy was adventurous by nature. A world champion water ski jumper at the age of thirteen, he was a popular student who was too competitive not to do better than his grades in the classroom suggested. He stayed in school long enough to get a law degree and had a keen intelligence that would have allowed him to upend the legal profession. Instead, he was a precocious entrepreneur who opened his first bar at age 23.
That first bar was followed by forty different restaurant concepts and his proudest business accomplishment, The Fort Sutter Hotel. He never gave up. He took real risks and confronted failure. Although sentimental, and a Disney movie would always make him cry, and his vinyl record collection was a refuge, if a restaurant or bar didn't work, he would re-imagine it. He was never afraid to make a difficult decision. Always fair, steady and trusted, his graciousness was related to his integrity. He was not easy to impress, but those people who did impress him were just as likely to be a bartender exhibiting true hospitality as it was the governor sitting at one of his tables.
It is true that almost a million moments are preserved in the memories of those who celebrated special occasions in the establishments Randy brought to life. His successes in business were grounded in Randy being curious about people. He was always eager to meet a new guest and learn why they were in his restaurant. He had a playwright's heart and an accountant's brain. His footprint on the Sacramento restaurant scene is inexorable and lasting in the thousands of employees who grew up and learned hospitality while working for Randy. His voice is also alive in the fabulous restaurants he was so proud to see others who left Paragary's to open on their own.
All of his life Randy was as cool as fresh air. He made others laugh, and laughed often himself in his quiet, bemused and understated way. His wit was puncturing, yet never hurtful. He was the consummate listener. People knew they mattered when they were with him. As a young man his long hair and mustache captured the California hippie. And, as he got older, he often had people tell him he never aged. While he knew this was not true, he loved hearing it.
He was a loving husband, father, son and brother. Until the last weeks of his life when the fateful diagnosis changed everything, he and his now 93-year-old mother and daughter enjoyed having Sunday brunch together. He had all the failings and foibles of a genuine human being. He brought those complexities to friendships, and an ineffable glow is gone with his departure. Soon, of course, the fierceness of grief will pass, and all those who knew him will feel better when they think of their time in his company. The best that can be said is that Randy Paragary made the world better for others and is an example of a life well lived.
Randy was laid to rest at East Lawn Cemetery on August 28th in a private ceremony. His family invites you to join them for his memorial service on September 21 at the Trinity Cathedral at 2620 Capitol at 10 am. Overflow guests will be welcomed to the B Street Theatre main stage next door with a live feed from the cathedral. Please wear a mask as safety protocols will be followed.
In lieu of flowers, those interested are encouraged to donate to the upcoming inspirational lighting project in Midtown's Sutter District where Randy spent so much of his time. The project will be led by the Midtown Association/Midtown Parks and will pay tribute to Randy's lasting influence on our region. To contribute, please mail donations to Midtown Association, 1401 21st Street, Unit A, Sacramento, CA 95822 or donate online at http://exploremidtown.org/midtownparks/.

Published by The Sacramento Bee on Sep. 15, 2021.
To plant trees in memory, please visit the Sympathy Store.
MEMORIAL EVENTS
Sep
21
Memorial service
10:00a.m.
Trinity Cathedral
2620 Capitol, CA
MAKE A DONATION
MEMORIES & CONDOLENCES
Sponsored by Sacbee.com.
11 Entries
Cheri and I truly enjoyed your company when visiting some of your restaurants. We especially appreciated your attendance at our wedding on 7/7/1979. You always stopped by to say hello and welcome to Paragary's on so many occasions. Gonna miss you Randy. May our lord take good care of you in heaven as he did on earth. Love and passion, Bob and Cheri.
Robert Schoenborn
Friend
October 2, 2021
I offer heartfelt sympathy to Randy's family. Randy's presence and influence as our midtown business neighbor will always be appreciated and felt every time we admire the new hotel sitting on property we once owned.
Robin Wham
Work
September 21, 2021
stacy, our lives are richer & better for having randy in them, his departure left a huge hole in the community & the hearts of many, knowing him warmed the hearts of countless people. i loved every minute i was honored to be in his presence, he always had a positive influence on me; he treated everyone as if they were his best friend. my heart is broken for most especially - you, & his family & friends. sincere condolences to the paragary family & the entire community.
carol mott-binkley
Friend
September 17, 2021
Sacramento is poorer for the loss of this creative, passionate restaurant guru.
Alan Irvine, Scott's Seafood on the River
Work
September 17, 2021
Mike and I are heartbroken over Randy's passing. It seemed as though he never aged and would live forever. Thank you Randy for all the good times, laughs and great food. We wish Stacy and the family peace knowing what a wonderful example of a man he was. Sacramento has suffered a great loss and was so proud of him!
Mike and Bette Burrows Dawson
Friend
September 16, 2021
Randy was always a friendly, kind person. Although I left my hometown of Sacramento in `79 I will never forget the fun, wild times at the Parapow Palace. Randy provided a good place for live music and dancing. Rest In Peace to a good guy. My condolences to his family.
Ann D Meyer
Other
September 16, 2021
Randy and I first met when I was 15. We quickly became best friends all through our high school years at McClatchy. I have so many great memories of our great times together in our youth. I am so proud and privileged to have been Randy´s partner in the Arbor Restaurant and Lord Beaverbrooks Bar.I will miss him dearly and rest in my my dear friend.
Jim Moore
Friend
September 15, 2021
I offer my condolences to Stacy and family. Randy was a true gentleman. He will be greatly missed.
Susan Glabe
Other
September 15, 2021
What a beautiful written tribute to An amazing man. There's a hole in the world where he stood and my heart is heavy for his family. A Hui Ho..
Betty Brown
September 15, 2021
My heart goes out to the Paragary family. Knowing Stacy she will carry on Randy´s legacy in great fashion. Randy we will miss you
Kathleen Sarti
Friend
September 15, 2021
Randy got my motor running early in life and was instrumental in all my accomplishments that came through the years. Thank you my friend for everything you did for me. I will miss you greatly...
David Kelley
Friend
September 15, 2021
Showing 1 - 11 of 11 results