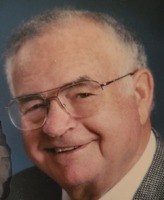 BORN
1928
DIED
2021
FUNERAL HOME
W.F. Gormley & Sons
2015 Capitol Ave
Sacramento, CA
Richard R. "Dick" Ramey
April 19, 1928 - October 15, 2021
Sacramento, California - It is with great sadness and a heavy heart that we announce the passing of Richard R. Ramey at the age of 93. A long-time resident of Sacramento, he was a great man who embraced the responsibility to share his profound gifts with those fortunate to be in his life. Richard was preceded in death by his loving wife of 63 memorable years, Patti Ramey. He is survived by daughters Diane Baker and Jan Ramey, and sons David Ramey (Charleen), Steven Ramey, and John Ramey (Jennifer) as well as seven grandchildren, eight great-grandchildren, and two great-great grandchildren.
Richard was born and raised in Billings, MT. Following high school graduation, he joined the U.S. Navy and served for two years. He then went on to further his education at the University of Washington and joined the NROTC program to continue his Navy connection. Following graduation in 1951 with a Bachelor of Arts degree in economics and business, he moved to Ellensburg, WA, where he accepted a position at an accounting firm, passed his Washington state CPA exams, and started his own accounting business. In 1957, he sold his business after accepting a position with the national accounting firm of Ernst & Ernst (now Ernst & Young) and moved to Spokane, WA. Richard spent the next 30 years of his career with the firm, moving rapidly through their ranks in both the Sacramento and Oakland offices. He became a partner in 1970 while in Oakland and, after four years there, was transferred back to Sacramento where he was named Managing Partner, a post he held for 15 years. During his time as Managing Partner, the Sacramento office tripled in size. He retired from Ernst & Young in 1988.
Throughout his career, Richard immersed himself in many professional and community service activities. He held the positions of president, vice president, treasurer or director for organizations including the Washington State Jaycees, U.S. Jaycees, California Society of CPA's, Sacramento Metropolitan Chamber of Commerce, Sacramento Host Lions Club, Sacramento Rotary Foundation, Mercy Hospital Foundation, Sacramento Children's Home, Sutter Club, Sacramento YMCA, Diabetes Association of Sacramento, and The Salvation Army.
Richard and his wife, Patti, enjoyed the adventure of travel and visited more than 80 countries and all 50 states. He coached Little League Baseball teams for all three of his sons and enjoyed watching his grandkids and great-grands play soccer, participate in swim meets, and play baseball and football. He was a huge Dodgers and Rams fan, and turned from a Lakers fan to the Kings. His biggest recreational enjoyment, however, was playing golf. He was a member of Del Paso Country Club where he could be found on most Saturday mornings, and more often after he retired. His golf course bucket list, which included courses from around the world, was completed except for Augusta National Golf Club.
A memorial service will be held on Friday, November 5, at 10:00 a.m. at Gormley & Sons Funeral Home, 2015 Capitol Avenue, Sacramento, CA.

Published by & from Oct. 23 to Oct. 24, 2021.
To plant trees in memory, please visit the Sympathy Store.
MEMORIAL EVENTS
Nov
5
Memorial service
10:00a.m.
W.F. Gormley & Sons
2015 Capitol Ave, Sacramento, CA
Funeral services provided by:
W.F. Gormley & Sons
MAKE A DONATION
Please consider a donation as requested by the family.
MEMORIES & CONDOLENCES
Sponsored by Sacbee.com.
2 Entries
A great man, coach, and mentor.
Guy Vasconcellos
November 6, 2021
Thank you so much, Dick, for giving me a start in my career and a lifetime of ethics and moral compass.
Bob Peters
Work
November 1, 2021
Showing 1 - 2 of 2 results