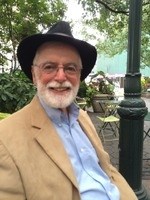 To plant trees in memory, please visit our Sympathy Store.
Published by & from Jun. 26 to Jun. 27, 2021.
MEMORIAL EVENTS
No memorial events are currently scheduled.
To offer your sympathy during this difficult time, you can now have memorial trees planted in a National Forest in memory of your loved one.
Funeral services provided by:
Stein & Sons Funeral and Cremation Service
MEMORIES & CONDOLENCES
Sponsored by Sacbee.com.
5 Entries
Saul will be greatly missed by those of us in the Perennial Plant Club. He was a strong and dedicated leader in his long tenure as president. What a great man !
Jeannie Claypoole
Other
July 17, 2021
Saul had an impact on my life. Not only on the soccer field but in the classroom. I still recall 36 years later the Bing, Bang and Bongo method to writing. It just made sense on how he explained this method of writing. He broke it down and everything just clicked that day. I also recall listening to songs such as the "Boys of Summer" by Don Hensley in his classroom. There was a simply method to his style of teaching which I greatly appreciated. Thank you Saul .. RIP
Eric Parks
July 10, 2021
Julie and Dylan, Saul was always so full of positive fresh insights, information or observations. He made us feel great when we were around him. What an amazing life he had. My thoughts are with you 2 . Peace from the Richter Ranch
Christina L Richter
Other
June 30, 2021
Dylan and Julie-I wanted to reach out and tell you how sorry I was to learn of Sauls passing. After reading his -beautifully written ! -obituary-I had a renewed appreciation for the Renaissance man that I always knew he was. He was always so supportive of me as a wet behind the ears new fellow teacher. I´ll never forget the time he agreed to play the role of President Reagan in our class congress simulation. He took it over the top! Surprised and pleased the heck out of me. What a class act he was. I think of you both often and wish you well. And I think of Peach as well. I hope it´s helpful to know they´re together now. Wishing you fond memories.
Sandy Silberstein
Work
June 29, 2021
Saul was a fabulous human being, a fully developed person and true friend. His loss is devastating.
Jack and Valerie Sanchez
School
June 28, 2021
Showing 1 - 5 of 5 results