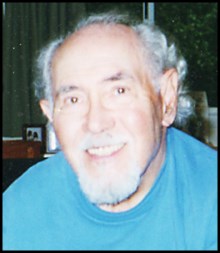 Born March 19, 1923, in Patterson, LA, Joe spent his earliest years in Havana, Cuba. His family eventually returned to the U.S. and settled in a predominantly Jewish neighborhood in Brooklyn, NY. 'Joe' soon became Servando's anglicized name and 'Yuss' his Yiddish one, the first of many monikers he was given and loved. 'Coach,' was another favorite.

Joe was strongly influenced by the practice of 'tikkun olam,' the Jewish term for 'repairing the world,' and throughout his life he was a champion of social justice, human rights and civil liberties. He loved the printed word and his interests were limitless. Confined to bed as a young boy with rheumatic fever, reading became his lifesaver; writing soon became its companion. Over the course of his life, he wrote everything from academic manuals to public policy treatises, essays, short stories, poetry, and beautiful love letters. He had more than 100 letters-to-the-editor published by The Sacramento Bee.

Joe was a gifted speaker with a phenomenal memory, a wonderful sense of humor, and a depth of knowledge about an extensive list of subjects. He left an indelible and positive imprint on most people-even those who knew him only briefly. Students and peers from the distant past would be ecstatic when they 'found' him; many of them said he 'changed their life.'

His own life was changed when Pearl Harbor was bombed. He left Brooklyn College as an 18 year-old to enlist in World War II and served 4 years and flew 60 combat missions in the European Theater as a top turret gunner in a B-25. In 1952, while completing work on his doctoral degree, the U.S. Air Force recalled him to active duty. He served for the next 20 years as an intelligence and special operations officer with tours of duty that included Germany, Lebanon, Venezuela, Vietnam, Cuba, the Joint Chiefs of Staff (or, as Joe called it, the 'jungles of DC') and the Air Force Academy. For his distinguished service, he was awarded the U.S. Legion of Merit, a Special Freedom Foundation Award, and more than 20 other commendations from the Army, Air Force and other countries.

He retired as a lieutenant colonel in 1971 and returned to academia as the Dean of Students at Eisenhower College in New York. In 1974, he and Carol married and in 1975, they moved their blended family to CA. Joe spent the next 25 years as an advocate for migrant farm workers, immigrants and other disenfranchised poor, bringing their deplorable living and working conditions to the attention of state legislators and government officials. During this period, he served as Deputy Director of La Cooperativa de Campesina. He was also the Project Director and Editor of 'The Education of Adult Migrant Farmworkers,' a 2-volume publication commissioned by the US Dept of Education that provided resources for use by teachers & administrators throughout the nation; and he proposed and lobbied for a 'National Immigrants Day' to honor those who add to the richness and diversity of our country.

No picture of Joe would be complete without mention of his love affair with fencing. He began fencing at the age of 13 and co-captained his Brooklyn College team before the war and his NYU team after it, winning the Eastern and National Collegiate Three-Weapon Team Championships. From 1949-1952, he coached the U.S. Military Academy and Columbia Univ. fencing teams and individuals to national championships. In 2002, Columbia honored him as the 'Progenitor of the Golden Age of Columbia Fencing,' and in 2009 he was inducted into the U.S. Fencing Hall of Fame.

Very significantly, Joe is credited with ending racial discrimination in fencing as the result of withdrawing his Columbia team from a 1949 competition that barred his black fencer from participating. He was told he was ahead of his time and pushing too hard too fast; his response was that he fought the Nazis to defend our Constitutional principle of equal opportunity and it was others who were behind the times and moving too slow.

Joe lived a good life. He knew what he felt, said what he meant and did what he said. He was a man of integrity, taste and judgment. He shared his knowledge, humor, philosophy and affection with his family and friends until his last day on September 26, 2012. He enriched the lives of those who let him. He loved without condition and was so greatly loved by so many. He was 89 but he was never old. He was a gift.

Survived by his wife, Carol Greenwood Velarde of Elk Grove and their children, Geraldine Collins, Servando J. Velarde III (Luminita), Gayle Palumbo (Maurice), Maria Duke (Pascal), and Leonard Velarde (Stacy); sister, Maria Paul, 14 grandchildren, 5 great-grandchildren, and an extended family of in-laws, cousins, nephews and nieces. Joe's dear daughter, Dana Rortvedt, predeceased him.
Published by The Sacramento Bee on Oct. 28, 2012.
To plant trees in memory, please visit the Sympathy Store.
MEMORIAL EVENTS
To offer your sympathy during this difficult time, you can now have memorial trees planted in a National Forest in memory of your loved one.
MAKE A DONATION
MEMORIES & CONDOLENCES
Sponsored by anonymous.
5 Entries
THE COACH WAS A REAL GUY AND CONTRIBUTED MUCH TO MY FOUR YEARS AT WEST POINT. HE WENT ON TO GREATER THINGS AND IT WAS VERY SATISFYING TO READ ABOUT HIS PROGRESS, ALWAYS, IT SEEMED, ON THE OTHER SIDE OF THE WORLD. WELL DONE, JOE. REST IN PEACE.
BRUCE CARSWELL
October 23, 2013
Leave it to me to forget to add my name to the previous entry about Coach Velarde and West Point fencing. I do this all the time. Maybe it is because I am almost as old and Joe. When he came to coach fencing at the Academy he had just graduated from NYU. Coach Jack Dimond had retired and the Academy needed a coach. The asked Maestro Costello of NYU for a recommendation and it was Joe Velarde. Little did we on the team know that during his spare time he would travel to NY to take coaching lessons from Maestro Costello.

Once again... Rest in Peace and don't try to organize up there.

Jack
Jack Hayne
March 29, 2013
At the United States Military Academy, West Point, we called him Coach and sometimes just Joe. He was an excellent fencing coach and worked very hard to make us the best we could be so much so, that in the spring of 19409 our team won the NCAA Fencing Championship. With his fabulous sense of humor he kept the team in stitch with his gift of mimicry. I was stationed at Ent AFB, Colorado Springs, CO and was elated to hear that he was to be the coach at Air Force Academy but disappointed that I was leaving my assignment while he and his family were on the road heading west. My wife and I kept and eye out for two VWs on the road in order to intercept the Velarde family. Didn't happen. Years later told me that at a rest stop in Pennsylvania their cat went AWOL and they lot a lot of time looking for it to no avail. Joe, we miss you and May you rest in Peace.
March 29, 2013
I did not know Mr. Velarde, but he sounds like a great man. A man of principle, morals and ethics. I'm so sorry for your loss and ours.
Mark Wristen
October 28, 2012
My life is better for having known and worked with Joe. His intellect was seldom matched; his humility and love for Carol were inspiring. Rest in peace, my friend, and may we meet at Heaven's gate.
Donna Fairchild
October 28, 2012
Showing 1 - 5 of 5 results