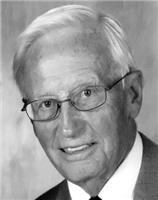 BORN
1924
DIED
2021
FUNERAL HOME
Struve and Laporte Funeral Chapel
41 West San Luis
Salinas, CA
Walter Leslie Blomquist, a lifelong Salinas Valley resident, passed away on Aug. 22 at the age of 97.
Walter was born May 2, 1924 to Leon and Anna Blomquist. He was their 11th child, with the family ultimately growing to 13 children. Growing up during The Depression led to a tight-knit family with a strong work ethic, which enjoyed simple pleasures together. Walter attended Salinas High School, leaving in November of his senior year to enlist in the Army Air Corps to serve in World War II. He trained in Salinas and was able to take leave and graduate with his class prior to being deployed. He served as an airplane mechanic, being stationed in England, France, and Germany.
After returning home, he followed the example of his grandfather and father and became a farmer. In 1954, while attending a dance in Soledad, he met Gloria Borla. He once said it was love at first sight the first time he saw her smile, and he knew she was the one that he wanted to marry. A year-and-a-half later, they were married on Sept. 4, 1955. They settled in Gonzales, and together they raised three children. Walter farmed until his retirement in 1986.
Although a humble farmer, Walter really missed his calling as an engineer. He was always working in his shop on equipment, making repairs, changes, and improvements. International Harvester Company once sent a factory representative out to take pictures of improvements made by re-engineering his bean harvester by adding a seed cleaner and different delivery system for the beans routed into the onboard storage compartments. His improvements were to be used on future designs by International.
Walter's work on airplanes during the war led to an interest in flying, so after returning home from the war, he took advantage of the GI Bill and enrolled in a commercial aviation course and learned to fly. Always looking for an excuse to get up in the air and having his own landing strip, he often flew to visit relatives instead of driving and loved giving rides to the family.
Walter was a kind, generous, hard-working person who always put family first. He enjoyed his daily trips to the local coffee shop where he and his farmer friends would talk and solve the world's problems. After retirement, he and Gloria took many trips to Washington State and Arizona to visit their eldest son, and were able to visit Hawaii, the east coast of the US, Canada, and Europe.
Walter was preceded in death by his parents, Leon and Anna Blomquist; his wife, Gloria; four brothers, and eight sisters. He is survived by his children: Ron (Debbie) Blomquist of Chualar, Dennis (Yvette) Blomquist of Soledad, and Loriann Blomquist of Santa Clara. He also leaves seven grandchildren: Dustin Blomquist, Chris (Steph) Blomquist, Jill (Jon) Bush, Elise Blomquist, Andrea (Mitch) Balding, Megan Baggett, and Tyler Baggett; five great-grandchildren, and numerous nieces and nephews.
Visitation will be Thursday, Sept. 2 from 10 a.m. to 12 p.m. at Struve and Laporte on 41 W. San Luis Street in Salinas, with graveside services with honors following at 1:00 pm at the Garden of Memories on 850 Abbott Street in Salinas.
The family would like to thank the staff of Eden Valley for their kind and compassionate care. Donations in Walter's name can be made to Soledad Community Health Care District Foundation (Attn. Eden Valley Activity Dept.) 612 Main St, Soledad, CA 93960 or SPCA Monterey County, 1002 Monterey Salinas Hwy, Salinas, CA 93908.
Published by Salinas Valley Tribune from Sep. 1 to Sep. 7, 2021.
To plant trees in memory, please visit the Sympathy Store.
MEMORIAL EVENTS
Sep
2
Visitation
10:00a.m. - 12:00p.m.
Struve and Laporte Funeral Chapel
41 West San Luis, Salinas, CA
Sep
2
Graveside service
1:00p.m.
Garden of Memories
850 Abbott Street , Salinas, CA
Funeral services provided by:
Struve and Laporte Funeral Chapel
MAKE A DONATION
MEMORIES & CONDOLENCES
Sponsored by Struve and Laporte Funeral Chapel.
1 Entry
May God bless you and your family in this time of sorrow.
Yna DeLa Cruz
August 31, 2021
Showing 1 - 1 of 1 results