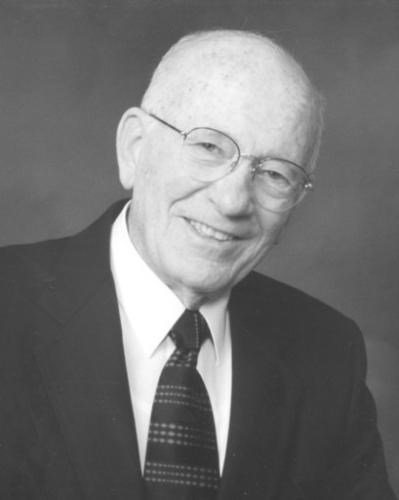 BORN
1929
DIED
2014
FUNERAL HOME
Jenkins-Soffe Funeral Home & Cremation Center, South Valley
1007 W South Jordan Parkway
South Jordan, UT
Calvin L. Maxfield
1929 ~ 2014
Calvin L. Maxfield passed away Tuesday, September 16, 2014, in his home of complications from a long struggle with a chronic illness. He was born August 12, 1929, to Louis E.O. and Rosamond Palmer Maxfield in South Jordan, Utah. Raised at the mouth of American Fork Canyon until the age of 12, the family then moved to South Jordan. He learned the value of hard work on the family farm and the love of music as he sang with his 3 brothers all over the valley. Music was an important part of family life. He was an active member of the Church of Jesus Christ of Latter-day Saints. He served a mission in the East Central States Mission, comprising Kentucky, Tennessee, and West Virginia from 1949-1951 and always loved that part of the country and missionary work. He served faithfully and actively in the church throughout his life, including Bishop of a ward he loved so much. Upon his return from missionary service, he entered military service and served in the 108th Counter Intelligence Corps. for 2 years in Boston, Massachusetts, Baltimore, Maryland and New York City. He graduated from the University of Utah with a degree in Mathematics and taught Math for 30 years, most of which he was head of the Math Department at Hillcrest High School where he influenced the lives of countless young people. He also worked construction during the summer months and was valued because of his skills with tools and his work ethic.
He married Arlene Jones Maxfield on August 14, 1951, in the Salt Lake Temple. She preceded him in death. He is survived by his children Joyce (Mitchell) Chesney, Karen (Joey) Brito, DeAnn (Jim) Murtha, and Russell (Brittany) Maxfield. Also survived by 17 grandchildren and 12 great-grandchildren, brothers Clark Maxfield and Rodney Maxfield, and sisters JeNeal Boggess and Cheryl Peters. He was preceded in death by his parents and his brother Gerald Maxfield.
He married Doreen Okelberry Maxfield on August 29, 1997, and is survived by her and loved by her children Trent (Tricia) Okelberry, Scott (Debbie) Okelberry, Kiersten Okelberry Price, Marinda Okelberry, Daria (Chip) Wood, Marci (Jeff) Curran, and Russ (Holly) Smith, 21 grandchildren and 10 great-grandchildren.
He was a friend to many and always willing to lend a helping hand.
Services will be held on Saturday, September 20, 2014 at 11:00 am at the Chavez LDS Chapel, 1244 W. Chavez Drive (9700 South), South Jordan, Utah. Friends and family may call Friday evening, September 19, from 6:00-8:00 pm and on Saturday before the services from 9:00-10:30 am at the Chavez building. Interment at South Jordan City Cemetery. Online condolences at www.jenkins-soffe.com.
We wish to thank Janet Harris, RN, from Aspire Hospice for her tender care and concern for Cal during his illness.
To plant trees in memory, please visit our Sympathy Store.
Published by The Salt Lake Tribune from Sep. 18 to Sep. 20, 2014.
MEMORIAL EVENTS
Sep
19
Calling hours
6:00p.m. - 8:00p.m.
the Chavez building
, UT
Sep
20
Calling hours
9:00a.m. - 10:30a.m.
the Chavez building
, UT
Sep
20
Service
11:00a.m.
Chavez LDS Chapel
1244 W. Chavez Drive (9700 South), South Jordan, UT
Funeral services provided by:
Jenkins-Soffe Funeral Home & Cremation Center, South Valley
MAKE A DONATION
MEMORIES & CONDOLENCES
Sponsored by Jenkins-Soffe Funeral Home & Cremation Center, South Valley.
36 Entries
I met Margie Howell at the Temple this morning and she told me about your father's funeral. I wish I had known because I would have been there. I am grateful I saw your dad recently at another funeral. He was a wonderful Bishop and a great friend to my parents. I am sure they are having a wonderful reunion with him. My thoughts and prayers are with all of you.
Gloria Smart Allen
September 30, 2014
Dearest Doreen, I just learned of Cal's passing today. I will miss his delightful smile, booming voice and warm hugs. I love you my friend and am thinking about you!!
Ruth McKane
September 28, 2014
Your wonderful dad was the heart of the old Union 4th ward. He leaves an amazing legacy of love and service. I'm sure I can speak for my family in expressing what a blessing it is to know the Maxfield famiy. We send our love and sympathy at this time.
Susan Smart Whittenburg
September 26, 2014
Dear family, What a privilege it was to have attended Uncle Cal's funeral service; we were so touched by your sincere words and tributes. We left wanting to be better and to work harder! Each of our children have fond memories of Uncle Cal at KOA and feel it was such an honor to know him and to call him Uncle - he will be missed! We love you all and hope you know you continue to be in our thoughts and prayers!! Sincerely, Rob and Trina
September 23, 2014
To the Maxfiled Family - I am sorry to read about the passing of your Father. This wonderful man will be truly missed. Cal give my dad, mom and brothers a big hug for me.
Nat Brunson ( anderson)
September 23, 2014
He was a great teacher, I know all who were in his class will be sad to hear of his passing. And will be missed by all who knew him!!
steve tobler
September 21, 2014
To the Maxfield family,

Angela Johnson Terry I knew him very well he was very good friends with my parents when I had my oldest daughter he was the one that brought my parents to the hospital from the airport oh wow how sad I really liked him. Also when both of my parents died he was there to help me through things that I was dealing with he was a great man and he will be truly missed.
Angela & Royal Terry
September 18, 2014
Many good wishes to Mr. Maxfield's family. Mr. Maxfield was my math teacher, and I appreciated his passion for teaching, his obvious love for mathematics, and his sincere interest in students. Blessings and prayers to his family and friends. Sincerely, Ann Berghout Austin
Ann Berghout Austin
September 18, 2014
Joyce, DeAnn, Karen and Russell

I can't even begin to tell you how sorry I am for your loss. My favorite memories of him were all the times we shared at KOA. Please know you are all in my thoughts and prayers.
Mark Jones
September 18, 2014
Cal will be missed. He was such an influence for food for our family while we lived in his ward. Our hearts and prayers go out to the family. Dave and Luanne Simmons and Family
September 18, 2014
Cal was the second councilor when my Dad was the first councilor in the bishop brick when I was growing up. He was always a man of integrity My Dad always thought the world of him. He was one Man I looked up to and a good neighbor. I will forever remember his voice and he loved to talk. My thoughts and all my prayers to his family.
linda white
September 18, 2014
Dearest Doreen and family,
We are deeply saddened for your loss. We will remember Cal for his great stories and similes of life. There is solace in knowing he is at peace and painfree. Our hope is that in the passing days, you are all able to be at peace as well. You are in our hearts, thoughts and prayers.
- South Jordan Dental
Robert C. Paxton, DMD and Staff
September 18, 2014
I am honored to have known this great man! He has and will always hold a special place in my heart. I am grateful for the good conversations had with him. In the time I had to know him I always left with a smile on my face after visiting with him and him making me laugh with his great sense of humor! They just gained a great spirit in heaven, and my prayers go to his family here.
Tylee Hansen
September 18, 2014
Dear Friends, so sorry to hear of your father passing. He was a special friend. Please know our thoughts and prayers are with each of you. Cal say "hi to my Nate for me". Betty,Kris,Shanna and GEOFF.
Betty Anderson
September 18, 2014
Oh Cal! You are such a GREAT guy! I'm so glad I ran Into you earlier this year. You were such a great example to me growing up. I loved hearing all of your stories! I also appreciated your sense of humor. I send my condolences to the entire Maxfield family. I pray that you will feel comfort during this difficult time. God Be With You Til' We Meet Again!
Darci Simmons Brainich
September 18, 2014
He was my math teacher, but what he taught through his example was yet more valuable.
I wish peace to those who miss him.
Randall Kluge
September 18, 2014
What a great man and Uncle he was my teacher in High School you knew he loved his job an the kids he helped. We have lost a great friend and family member. Love you Uncle Cal thanks for accepting me and showing so much love. You will be truly missed!!
Kim Olson
September 18, 2014
Mr. Maxfield was one of my all time favorite math teachers. You knew he loved what he taught and loved helping the students. Rest in peace.
Lisa Sperry Jones
Hillcrest High Class of 1989
September 18, 2014
It has been many years but I will never forget "Calculator Maxfield". I am grateful for his sense of humor, ability to teach and most importantly his sincere concern for the students he taught. He was a good man and I am forever grateful to have known him.
Jason Howes
September 18, 2014
Dear Family, I was saddened to hear of the passing of Grandpa Maxfield. Even though I am not a family member, he always treated me as if I was. May our Heavenly Father bless you all with peace and comfort at this difficult time. Love, Kim Russell
Kim Russell
September 18, 2014
A wonderful teacher. Although it has been 27 years, I still appreciate the passion he had for both calculus and his students. You left you positive mark with me, Mr. Maxfield.