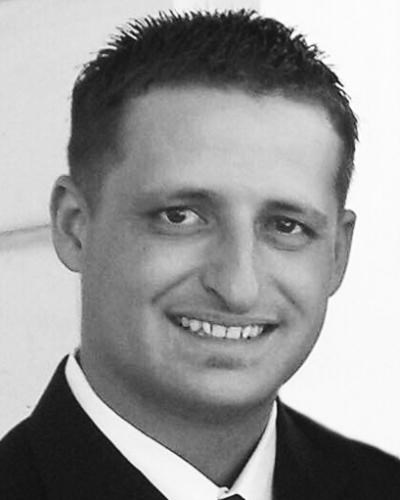 BORN
1977
DIED
2015
ABOUT
Cyprus High School
FUNERAL HOME
McDougal Funeral Home
4330 South Redwood Road
Taylorsville, UT
Chad S. Huntsman
"One Deuce"
Chad Steven Huntsman, 37, passed away April 7, 2015 in South Jordan, Utah. He will be forever remembered by his big smile, contagious laugh, and generous heart. Chad was loved by many and will be greatly missed, especially by his wife and children, who were the joy and light of his life.
Chad was born August 25, 1977 in Salt Lake City, Utah to Steven and Mary Huntsman. He grew up in West Valley City and graduated from Cyprus High School, where he was All-State in football, basketball and baseball. He later graduated from Southern Utah University, where he played safety on the football team. He wore the number 12 throughout his athletic career, and the number became his nickname to family and friends. He married the love of his life, Leslie Monroe, May 11, 2001 in the Manti Temple. Chad adored Leslie, who loved him unconditionally. Chad was a member of The Church of Jesus Christ of Latter-day Saints, where he served in numerous callings, most recently as a youth Sunday School teacher.He enjoyed the outdoors and was an avid hunter. The highlight of his days was spending time with his three children, Hallee, Hope and Miles. Chad's radiant personality and love was felt by everyone he knew. He always went out of his way to make people feel loved and appreciated.
He is survived by his wife, Leslie; daughters, Hallee and Hope; son, Miles; parents, Steven and Mary Huntsman; brothers, Kelly (Stacy) Huntsman, Kyle (Hilary) Huntsman; sister, Amanda (Chad) Bawden; parents-in-law, Lee and Mary Monroe; brothers-in-law, James (Karen) Monroe, Scott (Eryn) Monroe; sister-in-law Katie (Jake) Stephenson; and 18 nieces and nephews, whom he loved dearly.
Funeral services will take place Saturday, April 11, 2015, 12:00 noon at the South Jordan Parkway LDS Stake Center, 9894 S. 2700 W., South Jordan, Utah where viewings will take place at that location on Friday, April 10, 2015, 5 to 8 p.m, and Saturday, 9:30 to 11:30 a.m. prior to the funeral. Interment will take place at the Scipio Cemetery, Scipio, Utah. Arrangements under the direction of McDougal Funeral Home.
Published by The Salt Lake Tribune on Apr. 10, 2015.
To plant trees in memory, please visit the Sympathy Store.
MEMORIAL EVENTS
Apr
10
Viewing
5:00p.m. - 8:00p.m.
South Jordan Parkway LDS Stake Center
9894 S. 2700 W., South Jordan, UT
Apr
11
Viewing
9:30a.m. - 11:30a.m.
South Jordan Parkway LDS Stake Center
9894 S. 2700 W., South Jordan, UT
Apr
11
Funeral service
12:00p.m.
South Jordan Parkway LDS Stake Center
9894 S. 2700 W., South Jordan, UT
Funeral services provided by:
McDougal Funeral Home
MAKE A DONATION
MEMORIES & CONDOLENCES
Sponsored by McDougal Funeral Home.
26 Entries 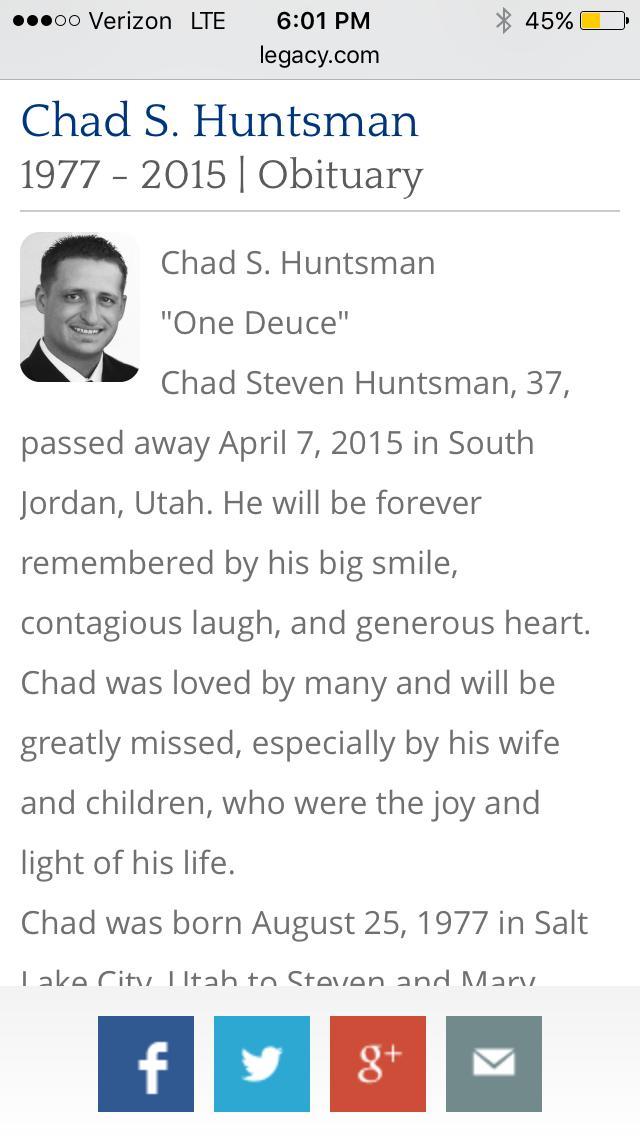 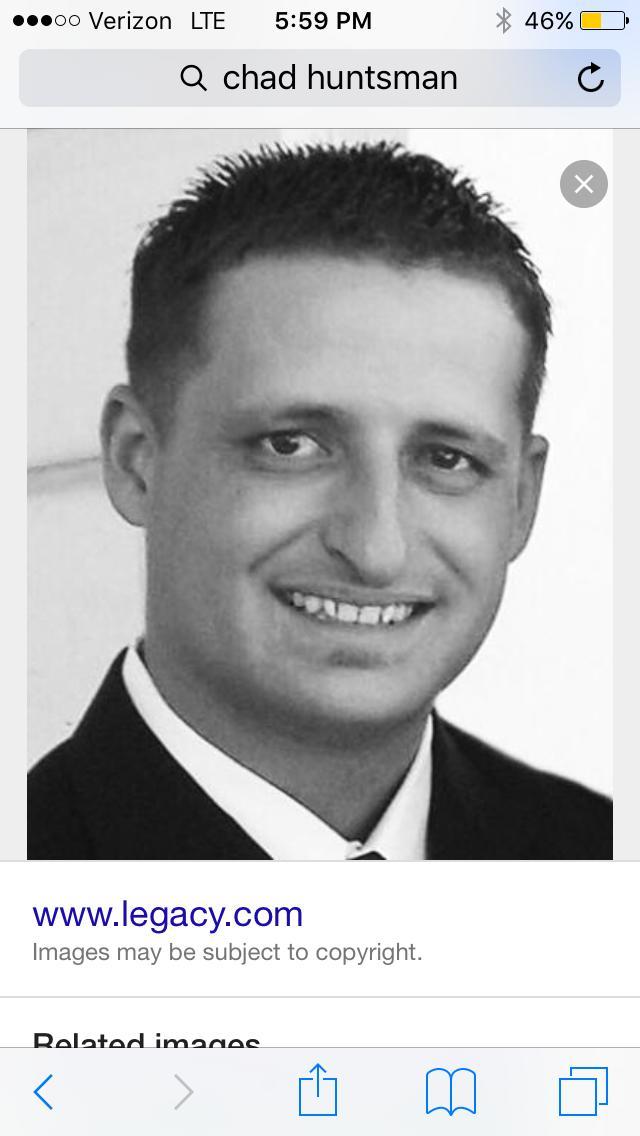 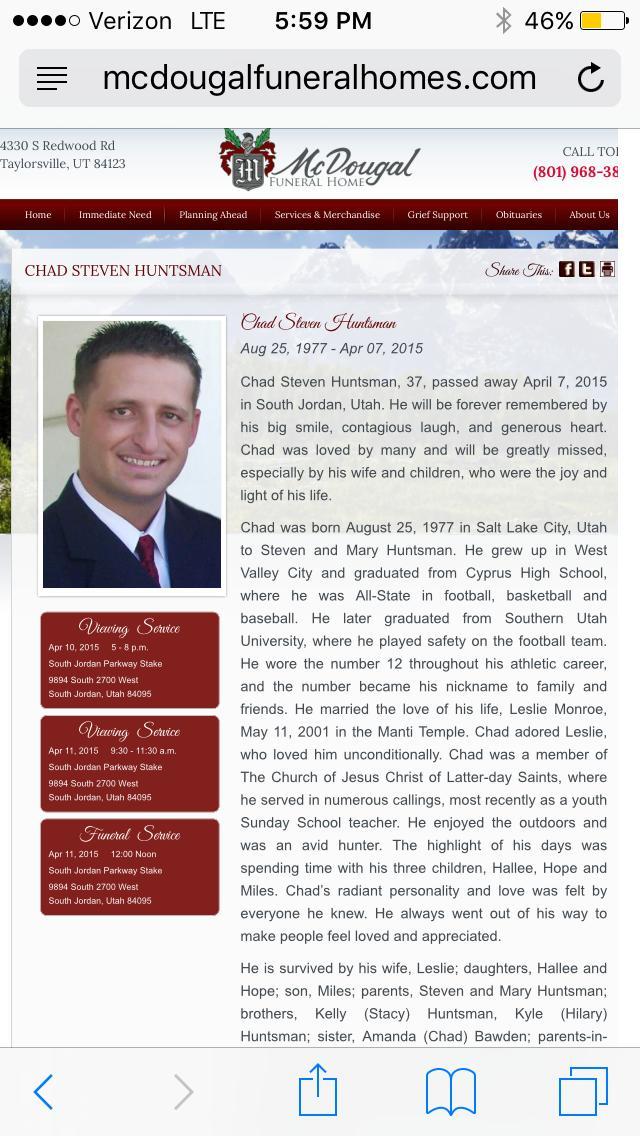 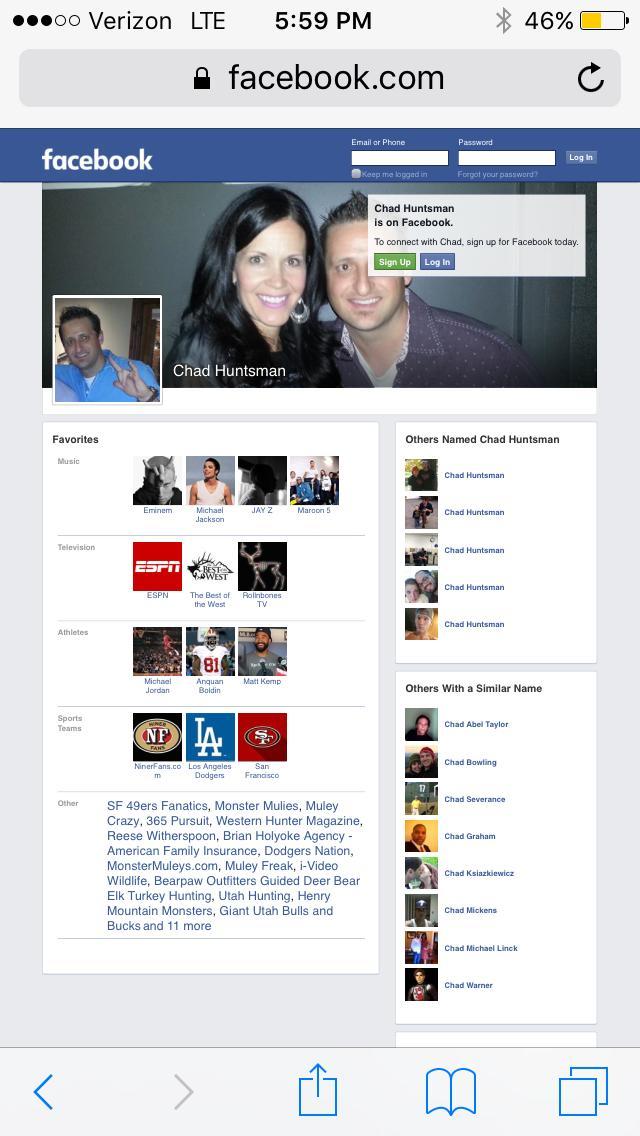 October 18, 2015
Steve, I can't imagine the pain of losing your child. I'm so glad you, Mary and Leslie have Halle, Hope and Miles in your life.
Nori Huntsman
April 19, 2015
I'm sorry for your loss. Chad was a great person, we were friends as kids. God bless.
Weston Woolsey
April 12, 2015
Leslie, I am so sorry for your loss. Thinking about you today.
Janet Crandall
April 11, 2015
So sorry to hear about Chad my thoughts are with your family.
Justin Boynton
April 11, 2015
I'm sorry for your loss. He was a great person. RIP
Loretta Baca
April 11, 2015
Miss you Chad. We will be watching over your family here, as I am sure you will be watching over them from there. We love you Leslie and family. http://www.gofundme.com/Huntsman
Kirk Harris
April 10, 2015
Dear Huntsman Family,
Sorry for your loss. My thoughts and prayers are with your family.
Todd Sudbury
April 10, 2015
Dear Leslie, Huntsman Family, and all those who knew and loved Chad. I am so sorry for your loss. I didn't know Chad personally very well, but I am very close with his cousin Danie. I remember being at Danie's house the day Chad and Leslie came home from their honey moon, they were a beautiful couple and I remember listening to them tell us stories about their honeymoon, and I thought it sounded so fabulous and romantic. I remember seeing some of their wedding pictures, Danie and I were 19 at the time, and we thought Leslie was the most beautiful bride. I know that mourning the loss of a loved one is something so personal that each one of us cannot begin to understand how another person is feeling. I know no words, or songs or poems can take away that raw ache in your chest. So the only thing I feel I can offer at this time is that I know Heavenly Father embraced Chad with open arms and I know he is loved in heaven and here on this earth. I am so sorry for each one of you. Sending love and peace and solace that you may find in his memories and in his love for you. Amanda hugs to you.
BreeAnn Fankhauser
April 10, 2015
Huntsman Family,

We were very saddened to hear the news of Chad's passing.
Our thoughts and prayers are with your family at this sad time.
Bob and Carmela Vernieuw
April 10, 2015
My thoughts and prayers are with your family and Chad's. May you find comfort in your faith and each other.
Debbie Rocha
April 10, 2015
Steve, Mary, Amanda, Kelly, I am so sorry for the pain you are going through. You are in my thoughts and prayers. I always felt like the honorary member of the Terry family since my sister had to bring me with her everywhere. I had the pleasure of growing up with all of the cousins as if they were my own. Chad had such a kind heart. His presence will be missed but his legacy lives on in the beautiful children he has. Leslie, please know you are in my thoughts and prayers, I know Chad will be watching over you and protecting you all. Much love to you all.
Michelle Baker
April 10, 2015
Steve and Mary
I am truly saddened by the death of your Son Chad.
May the Lord's Blessings be with you during this difficult time in your life.
Sincerely
Terral Huntsman
April 10, 2015
Dear Huntsman Family,
May your heart and soul find peace and comfort knowing that Chad is no longer suffering. And may you find joy for grateful memories of him that you will always treasure.
Love and Hugs,
The Reiser Family
Chris Reiser
April 10, 2015
Leslie, Chad was a delight talking to all of us ladies at bunco a few short weeks ago at your house, that's how I will always remember him.
Love you Les.
Kelly Hall
April 10, 2015
Dear Steve and Mary, Wendy and I were saddened to hear of the passing of your son. Your family is in our prayers may the Lord bless and comfort you during this most difficult time. Kevin and Wendy Gray.
Kevin Gray
April 9, 2015
Know of our love for your family, our prayers will be with your sweet sweet family during this time in your lives. Emilee remembers Chad being one of her favorite Sunday School teachers, he truly touched so many lives in such a positive, loving way.
Much love,
Ken and Lindsi Robinson
April 9, 2015
RIP Chad. So sad. You are gone too soon!
carleen richards
April 9, 2015
Sorry to hear about Chad. Your in our thoughts and prayers at this difficult time in your lives. Hope you all find peace and comfort in the days ahead of you.
Bryan Raisor
April 9, 2015
Condolences to the family
Rhaumla Gardner
April 9, 2015
Our love and prayers are with your family.
Russ & Lisa Crosland
April 9, 2015
Chad we will miss you so much. You were an amazing man and loved everybody. We love you.
Mikki Smith
April 9, 2015
Chad ,we will all miss you and will always remember you for your humor and wit.
dennis hansen
April 9, 2015
Showing 1 - 26 of 26 results