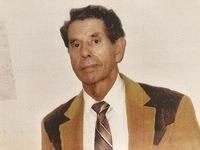 West Valley City—George LeRoy (Roy) Baker was born in Franklin, Idaho on Aug. 2, 1935 to Lillian May Kelly Baker and John Reynold Baker. His sister Darlene was the oldest, John (Renny) was the middle, and Roy was the youngest of them all including Ned and Wilford Baker, his half-brothers from his dad's first marriage. His early years included frustration that his mother would dress him and Renny in matching outfits. At this time his dad owned a restaurant and what Roy called a "beer joint". In his very early teens his parents divorced.

His father owned an award-winning dairy where Roy and Renny made the ice cream, ice cream sandwiches, and popsicles, and Renny did the books. The family still chuckles telling the story of when Roy and Renny experimented with making beer popsicles and they accidentally got delivered to an LDS church function.

They lived in the living quarters above the dairy until Roy's father married his third wife, Rena. They then moved in to a house across the street from the dairy with their new stepbrothers Wayne and Earl Nelson and Lamar McGram. Earl remembers Roy showing him how to make ice cream at the dairy in the mornings before their dad would do the deliveries. Later, Renny, Roy, and Earl would head to their dad's café to work. Roy continued working for his dad until graduating from Tooele High in 1954.

After High School, Roy joined the marines and was stationed in San Diego. He would hitchhike home on the weekends to visit his family. His stepmother would mail him loads of fudge (enough to share with the other marines), but when his sergeant said if it was sent for him he had to eat it all, he had to ask her to stop.

Roy was an incredible businessman. His own first business was a drive up ice cream/burger store halfway between Tooele and the truck stop going to Salt Lake. He had a Job at Vista Liner building little campers and then opened his own Vista Liner factory in Payson. Among his businesses and investments, he started Baker's Homes on Redwood Road where he sold manufactured homes and also took over ownership of the building where his dad's "burger joint" was in Tooele.

Roy adored his daughter, Julie. She hung out in a playpen with him at his first business. He cheered her on during her many barrel races and rodeos when she was a teenager. Together they had a house built for when she retired that they planned to share together, but she passed away before they were able to fulfill that dream.

Roy was an extremely caring man. Along with looking out for his family, he did things like joining the search for Elizabeth Smart and flying to New York after 9/11 to help with rescue efforts. When he did this he was told he was too old to dig through the rubble so he assisted in getting first responders food and water. Every day he would be covered in ash and he suspects this may have been what caused his cancer.

He is survived by his step brothers Wayne and Earl Nelson (sons of his dad's third wife), his sister-in-law Theresa Baker (Renny's wife), his stepdaughters Tammy Varney and Debbie Snarr, his grandson Eric Garcia, his great-granddaughters Jayden Kas Garcia and Bella Marie Garcia, and many nieces and nephews.

A funeral service was held Thursday, September 2, 2021 at 11:00 AM at Wasatch Lawn Mortuary, 3401 S. Highland Drive, Millcreek, Utah. He was interred at Wasatch Lawn Memorial Park at the same address.

Roy was kind, wise, extremely hard working, smart, generous, handsome, and brave. He was an inspiration to and will be missed by many.
Published by The Salt Lake Tribune from Sep. 24 to Oct. 31, 2021.
To plant trees in memory, please visit the Sympathy Store.
MEMORIAL EVENTS
To offer your sympathy during this difficult time, you can now have memorial trees planted in a National Forest in memory of your loved one.
Funeral services provided by:
Wasatch Lawn Mortuary
MAKE A DONATION
MEMORIES & CONDOLENCES
Sponsored by Wasatch Lawn Mortuary.
0 Entries
Be the first to post a memory or condolences.