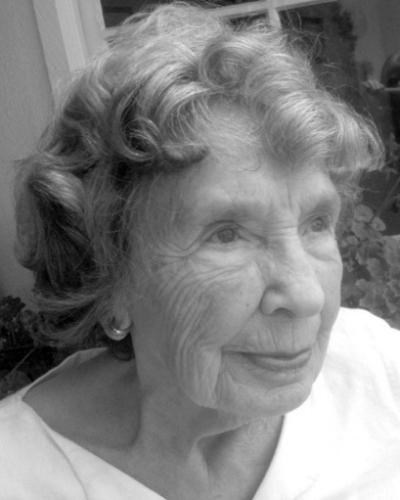 BORN
1921
DIED
2015
Aug. 2, 1921 ~ Aug. 10, 2015
Irene May Bates passed away at home in Venice, Ca. at 94 years of age. She was the inspiring mother of Lynda, Peter, John and Nicholas, doting grandmother of eleven and great-grandmother of twelve.
Born in Manchester, England, she married the love of her life, Bill who adored her until the day he passed away in 2012 after 71 years together. Emigrating to the U.S. in 1967, she went back to school, eventually earning a PhD from UCLA at age 70. Her studies led to her publications of many articles, papers and books, including Lost Legacy and Voyage of Discovery.
Cherished and admired by so many for her gentle warmth and inexhaustible caring, along with a penetrating practical wisdom, her presence lives on in the hearts of all those lucky enough to have known her.
A memorial service will be held to celebrate her life at The Lake Shrine in Pacific Palisades on October 16 2015.

Published by The Salt Lake Tribune from Aug. 15 to Aug. 16, 2015.
To plant trees in memory, please visit the Sympathy Store.
MEMORIAL EVENTS
Oct
16
Memorial service
The Lake Shrine
Pacific Palisades, CA
MAKE A DONATION
MEMORIES & CONDOLENCES
7 Entries
Dear Lynda, Peter, John and Nicholas: Meeting your whole family in Salt Lake when you moved from Manchester was a memorable moment in my life. I remember sitting in the kitchen talking to your Mum, so taken with her quiet wisdom. The years rolled by and everyone moved on. Then as an author and historian, while researching a topic for which she was an expert; I was overwhelmed to meet her again after thirty-five years. She generously helped me find my footing, and provided encouragement to finish my first book. This past spring, I thought of her often as I spent time in the British Archives working on medieval research. I appreciate the kindness she always extended to me, and the wonderful pieces of information she mailed to me as she cleared her files several years ago. Undoubtedly, she is overjoyed to rejoin Bill. Please accept my family's sincerest condolences.
Sue (Pouillon) Simonich
Sue Simonich
September 4, 2015
Your parents will be greatly missed, but the quality of their lives and relationship will live on in the hearts of many young men who had the opportunity to be part of their home and family. Their example of love and jest for life added to our lives in a profound way. We love the Bates!
Larry Wimmer
August 17, 2015
Dear Bates Family, the end of the long mortal journey for Irene is over, and I can only imagine that it brings mixed emotions for you all. I am sending you all my best wishes and thoughts as you adjust to life without your mother, grandmother and great grandmother. The loss of a great person who has lived such a long full life is such a bittersweet time and I hope you'll be able to draw on the many, many happy memories of your lives with her as you make your way through the coming days, weeks and years without her.

I first met Irene and Bill more than 25 years ago and the warmth of their friendship has grown over the years since. Irene is a great combination of keen intellect, gentle spirit and wry humor. She will be part of our family life and lore for the rest of our lives.

All my best. Alan Kearl
Alan Kearl
August 16, 2015
Dear Bates family, Irene was my dear friend and co-author. I know how much you must miss Irene--much as you miss Bill--but they are together now. My condolences to all of you. It was wonderful to have met your family in 1959 in Manchester, and to have continued to care for all of you. God bless you all.
Gary Smith
August 16, 2015
Irene wrote me every week after the death of my daughter. When we moved back to California she left her homemade carrot soup or lemon curd at my door. She was a saint and has been taken care of by a saint these past several years. Her daughter Lynda. All my love to the Bates family. Irene gave me hope when I had none. She gave me love when I felt unloveable. She believed in me and my writing when words wouldn't come. She mentored and loved me and saw the aches no one else saw. I miss her every day and always will.
Beckie Weinheimer
August 16, 2015
My condolences,sorry for your loss. May your heart find peace and comfort. Matthew 11:28,29,30, John 6:40,
August 15, 2015
How the years have flown by since I spent some time in the Bates home in Wythenshawe. I have fond memories of all the family and I extend my condolences to them at this time. Your Mum lived a full life and her continual desire to keep learning is an inspiration to us all. May you find comfort in knowing that her life and the memories she generated will last forever. Love to all, Keith Fisher
Keith Fisher
August 15, 2015
Showing 1 - 7 of 7 results