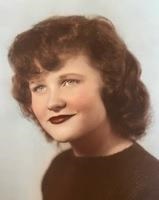 On the evening of September 21, 2021, this earth lost an expert baker of cookies, bargain hunter, garage saler, knitter and collector of dolls and knick-knacks. There was undoubtedly a great celebration as Ed Krause was reunited with his "Little Bride"; the great celebration also included her son Mark and many family and friends who left this life before her.

JoAnn Davis, born in Salt Lake City to Roy and Birdie Davis on June 14, 1932 - Flag Day. She loved that everyone flew their flag in celebration of her birthday. She married Edward Milton Krause on February 15, 1951. Ed and JoAnn raised two children, one granddaughter - Jesse Jo, and helped raise two great-grandsons - Evan and Dylan Row. They adored JoAnn and gave her the nick-name "Aggie".

Although JoAnn did not like camping or fishing, she spent many weekends with family and friends in their truck and camper in the mountains. She knew Ed enjoyed this and she loved making him happy. She also enjoyed her blue convertible mustang, treasure hunting during the annual garbage pick up in the city, and taking walks with her great friend Vonny. There was also a short time in the early 80's where she was addicted to playing video games. She did not miss a single episode of General Hospital in 50 years, and was a dedicated fan of the Utah Jazz and Mickey Mouse.

JoAnn took great pride in her home and it truly represented her well. For many years it was pink with bright pink trim on the outside. The inside was an eclectic collection of her favorite knick-knacks, a giant ceramic giraffe, and portions of her doll collection. Pictures of the family lined her walls with random scatterings of pictures of The Utah Jazz, Elvis Presley and other random things. Photo albums lined all of her shelves and she truly loved remembering all of the good times.

In addition to her husband Edward Krause and her son Mark Krause, JoAnn is currently celebrating with her parents, two brothers and a sister as well as brothers and sisters in laws, nieces, nephews, and many friends. Although she was very excited to join her husband and son, she will really be missed by her granddaughter Jesse Jo (Brian) Weyers, great-grandsons Evan (Alexa) Row and Dylan Row, sister in law Carlene (Joe) Robinson, life-long friend Barbara Lewis and many nieces and nephews.

Arrangements entrusted to Starks Funeral Parlor. Online condolences may be offered to her family at www.starksfuneral. com
Published by The Salt Lake Tribune from Sep. 24 to Sep. 28, 2021.
To plant trees in memory, please visit the Sympathy Store.
MEMORIAL EVENTS
To offer your sympathy during this difficult time, you can now have memorial trees planted in a National Forest in memory of your loved one.
Funeral services provided by:
Starks Funeral Parlor
MAKE A DONATION
MEMORIES & CONDOLENCES
Sponsored by Starks Funeral Parlor.
1 Entry
Being friends with her daughter, I spent a lot of time in their home. She was so much fun to be around. My condolences to her granddaughter Jessie and her great grandsons. She is now with her husband and her son. What a reunion for them it will be.
Shauna Findlay Boyack
September 26, 2021
Showing 1 - 1 of 1 results