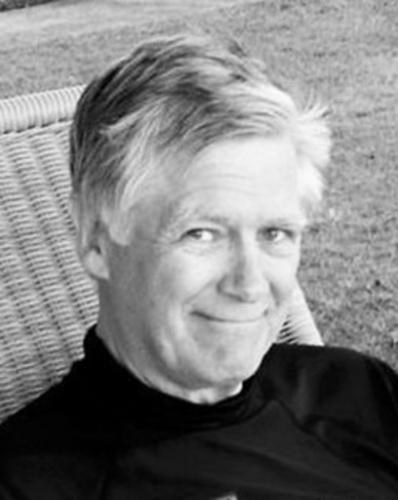 Kevin is one of my heroes and has shaped many aspects of my life and career. Rarely have I met someone who could step into a difficult situation with so much calmness and humor. In the years I worked with him he saved me countless times from doing really stupid things. I have missed him since I left the U and moved to Idaho and will continue to look forward to the time when I can again sit with him and enjoy his whit and counsel, My prayers go out to all of you this weekend. You are blessed to have had Kevin in your lives and will continue to feel his influence as he waits to be reunited with you.

Joe Taylor
November 7, 2014
I worked with Kevin at Control Equipment and am very saddened to read of his passing. He moved like lightening and was a darling man. Sincere condolences on the passing of a sweet fellow.
-Charlotte Werner Ovard
Charlotte Ovard
November 7, 2014
Gerri and family, Both Russ and I were so sad to hear of Kevin's passing. Kevin was the only man that could make me blush EVERY Sunday. He was so funny and as I read the other tributes I realize that he did accept me as I was. I love this picture with that cute smile! We are all so blessed to have the gospel in our lives and know that we will all be back together soon. With much love to you all, Russ and Candice Smart xo
November 7, 2014
Kevin was a good colleague, a friend for twenty five years and one of the most Christlike men I know. We shared many experiences together. He is a choice person in every way, a loyal friend, honest and fair to the core, with the gift to be able to show love for everyone. He greatly enriched my life and the lives of many others. Thank you Kevin for choosing to be such a wonderful person. We will miss you greatly, but our memories of your kindness will never fade and neither will our faith that we will see you again. Condolences to Gerri and the kids.

Steve Hess
Stephen Hess
November 7, 2014
We appreciated you as neighbors and sent our love and best wishes.
Kevin and Rebecca Jolley
November 6, 2014
Dear Gerri, and family,
There are no words to describe this loss. I've ALWAYS known Kevin, it all started in Kindergarten! Though there were many years in between graduation, and the re-connecting of the past five years or so, I treasure, the opportunity that I've had to know Kevin again! So happy he and Gerri were able to join us at some of the Alumni dinners and our Reunions. We shared many funny, happy times! When the ALS got worse, I saw him less, but kept up with him through his wonderful blog! He was a very smart, funny, sensitive man, whom I loved as a friend, I also respected and admired him. We had some good FB discussions, that I will always remember! He was such an inspiration to me, on how to endure to the end, and endure well. The way he accepted this trial, without complaint shows what a humble, teachable person he was. As sad as I am, I am happy that he is now well, and whole. He fought hard! I will miss him. Gerri, and Kevin's children, may the Holy Spirit whisper peace to you, and may you have comfort in the knowledge that FAMILIES ARE FOREVER! The Plan of Salvation is TRUE, he knew it.......he will be watching over you, and waiting until it is your time to join him. Rely on your memories to help you through this time of sorrow. He was a giant of a man! Go now, and Rest in Peace, my dear friend!
Dianne Auger Faurschou
November 6, 2014
Kevin was fun, friendly, kind and dependable. He made the world a better place and demonstrated courage as he faced ALS. God bless you all during this tender time of loss and change. Rebecca Willis Boren
November 6, 2014
Kevin and I went to see Ben Hur in 1963. He is such a good guy. He lived behind me, I'm glad I got to see him at our reunion.
Gary Roush
November 6, 2014
Gerri and Family,
I am deeply honored that I was able to know and learn from Kevin, especially how he taught me unconditional love for all. Kevin was always respected by all no matter where he went and always provided humor in only a way that Kevin could. Our world is much better today because Kevin lived and you shared this great person with all of us. Kevin loved his family from the bottom of his soul and worshipped you BB. For ALS to take him is beyond comprehension when Kevin had so much to give and offer. A piece of our hearts will always be with you Kevin – Rest well our friend.
Scott & Trixie Jensen
Scott Jensen
November 6, 2014
Oh my dear Gerri and kids, I am so sad to think of you missing Kevin. The world lost a beautiful light! Kevin was one of the most amazing people I had the privilege to know. My heart cries for you. I pray that you will find the strength to get through these hard days. I will always think of you and Kevin with love and fond memories!
Diana (VanStaveren) Vilardo
November 6, 2014
Kevin is one of the nicest, and most respectful, people I've had the honor of working with at the University of Utah. I will miss you Kevin! jt
November 6, 2014
My hero
Kevin's first born son
November 6, 2014
Everyone loved Kevin!!! He definately was my "Park Ranger"......loved those years serving in the youth programs with Kevin....Gerri'.....u r such a sweetheart...you and yours are in my prayers....be brave.....Luv u.......Judie Ashworth Moffett
November 6, 2014
The world lost a celestial being this week. I will always think fondly of Kevin and the many wondrous lessons he taught me, especially to love others from ALL walks of life.
Alisa
November 6, 2014
Uncle Eldon, Gerri, and family. I was both saddened yet glad for Kevin's passing. My loving cousin always had time for us kids. He always had a smile and kind words for us all. I know he had a joyous reunion with Aunt Betty and those Taylor's who preceded him. Family's are forever and I look forward to our meeting again. Our thoughts and prayers are with you all.
Randy
Randy Reid
November 6, 2014
I went to school with Kevin from elementary on up. I also worked at US West, but not directly with him. I feel as though he has always been in my life. He was such a sweet and gentle soul. I will miss him terribly. ALS is a horrible disease, I am truly saddened that such a great man was taken from us too soon by this disease. My deepest condolences to his family. I am so truly sorry for your loss as well as the loss felt by all of us who knew and loved Kevin. Rest well my friend.
Sharon Peake
November 6, 2014
Linda and family so sorry to hear of Kevin passing, Rose Park was a great place to grow up with life long friends
Dave Spainhower
Dave Spainhower
November 6, 2014
There is so much to miss...but above all, his kindness and acceptance of everyone he met.
November 5, 2014
Showing 1 - 27 of 27 results