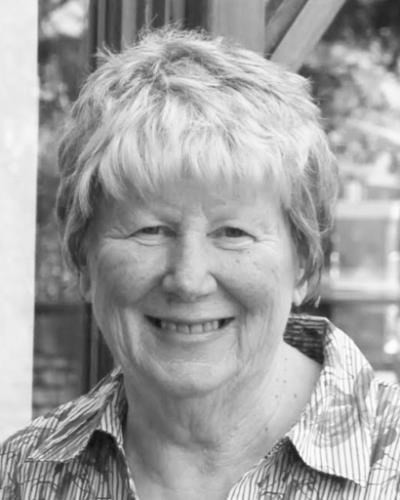 BORN
1941
DIED
2016
ABOUT
West High School
FUNERAL HOME
Larkin Mortuary - Salt Lake City
260 East South Temple
Salt Lake City, UT
Linda Hunter Adams
1941-2016
Linda Hunter Adams, age 75, passed away on Sunday, July 17, in her beloved family cabin in the beautiful mountains near Brighton, Utah.
An exceptionally intelligent and unfailingly kind woman, Linda's playful humor, generosity, openness, and genuine love of others drew people to her. Countless family, friends, and colleagues loved her dearly and will miss her keenly.
Linda was born in Logan, Utah, on March 13, 1941. When she was 4 years old, her father, Milton R. Hunter, was called to be a President of the First Quorum of the Seventy of The Church of Jesus Christ of Latter-day Saints and the family moved to Salt Lake City. Linda had a joyful childhood in the Avenues. She was very close to her father and her mother, Ferne Gardner Hunter, throughout their lives.
She graduated from West High School in 1959 and received her BA from Brigham Young University, where she was awarded outstanding graduating senior woman. She also received her MA from BYU.
Linda married Charles P. Adams in the Salt Lake Temple on April 2, 1969. They had a daughter, Jennifer, and a son, Nathaniel.
An associate professor at BYU for 30 years, Linda taught English and editing, and influenced thousands of students. She was director of the Humanities Publications Center, where she produced hundreds of books and journals. She was associate editor of BYU Studies for 15 years. She managed student journals, including Inscape and The Leading Edge, and helped organize conferences, including Life, the Universe, and Everything. She was an editor for Pioneer Magazine and also spent a number of years working on the Joseph Smith Papers.
Linda taught her students to be fine editors, helped them start their careers in numerous different fields, and introduced them to future spouses. Most importantly, she taught them by example to live Christlike lives.
Linda immersed herself fully and joyfully in her work. She fondly remembered her trip to Guatemala for linguistics research when she was an undergraduate. She also loved her trips for the McGraw-Hill publishing conference, the Stanford University publishing conference, the Rocky Mountain Medieval and Renaissance Association conferences, and presenting a paper to the Tyndale Society at Oxford University.
She served faithfully in her church throughout her life. Linda taught Gospel Doctrine for more than a decade. She was especially proud of the Education Weekend she organized for her stake for a number of years, bringing in distinguished speakers and musicians.
Linda had a gift for connecting people to each other and making them feel valued. She loved her time in Authors Club, Writers at Work, Pilgrimage, and her numerous books clubs and study groups.
She is survived by Charles P. Adams, Jennifer Adams (Bill Dunford), and Nathaniel Adams. Also survived by her sisters Margaret Gritton (the late Vance Gritton), Lois Anne McGill (Patrick McGill), Alison Koritz (Charles Koritz), her brother Michael Hunter, her step-grandchildren, and many nieces and nephews. She is preceded in death by her parents and her brother Reed Hunter (Mary Anne Hunter). Dr. Saundra Buys at the Huntsman Cancer Institute brought her many years of healing and friendship.
Linda's funeral will be held at 11 a.m. on Saturday, July 23, at the Winder Third Ward, 4551 South 1200 East, Salt Lake City. A viewing will be held there that morning from 9:45 to 10:45 a.m. A second viewing will be held Friday evening, July 22, from 6 to 8 p.m. at the Larkin Mortuary, 260 East South Temple. The family thanks everyone for their kindness and expressions of love throughout Linda's final illness.
Published by The Salt Lake Tribune on Jul. 21, 2016.
To plant trees in memory, please visit the Sympathy Store.
MEMORIAL EVENTS
Jul
22
Viewing
6:00p.m. - 8:00p.m.
Larkin Mortuary - Salt Lake City
260 East South Temple, Salt Lake City, UT
Jul
23
Viewing
9:45a.m. - 10:45a.m.
Winder Third Ward
4551 South 1200 East, Salt Lake City, UT
Jul
23
Funeral
11:00a.m.
Winder Third Ward
4551 South 1200 East, Salt Lake City, UT
Funeral services provided by:
Larkin Mortuary - Salt Lake City
MAKE A DONATION
MEMORIES & CONDOLENCES
Sponsored by Larkin Mortuary - Salt Lake City.
15 Entries
As one of the thousands who benefited from Linda Hunter Adams' extraordinary gifts, may I offer my notes from her freshman English class, September 7, 1977:

As I prepare my own syllabi here for the only Mormon university on the east coast of the United States, I will try to carry on her legacy with my own incoming 18-year-olds.

Best wishes to the family of a great teacher.
James Douglas Orton
August 12, 2016
Linda was my colleague for a few years in the English Department, and I always found her warm and welcoming--always ready to share a smile, a thought, a good joke. She had a great sense of humor, and she continued to come to annual parties held by the women faculty in the English Department even after she had moved to the Linguistics and English Language Department. We were grateful to have her at them because she could really laugh and contribute to the merriment of the occasion. We used to give each other white elephant gifts. I think Linda ended up with the "hair shirt" and the "Last Supper clock," which circulated for several years--no one wanting to keep them. Her love for others, for her family and for the Lord were her finest qualities. She will be missed all over the place. My deepest sympathy to her family and friends.
Kristine Hansen
July 26, 2016
Linda was an extraordinarily empathetic and ethical person. I am honored to have been one of her friends.
Karen Rosenbaum
July 24, 2016
We loved Linda so much! Her knowledge and interesting tid bits that she brought into our Gospel Doctrine class were so fun, and made such a great addition to the class.
We will miss her kindness, and her warm smile. She was a true friend.
Ed and Ann Bolander
July 23, 2016
From Linda we learn to love life and people.
July 23, 2016
We were fortunate in those JKHB days that the editing office was next to the graduate seminar room. Linda's gift for connecting people pervaded that space and formed endearing friendships. I believe her keen editor's attention to detail, soft heart, and openness to the Spirit helped her not only correct errors on the page but mentor by detecting gaps and hopes in our lives. Her editing class helped me pay the rent and still serves me almost every day as I learned I was more scholar than editor, but still have work to edit anyway. The best editors make the project better by bringing out the author's own best work; that's an important way Linda made this world better for us. Thank you to her family for sharing her.
Jill Rudy
July 23, 2016
Linda grabbed me from the hall of the JKHB one day and asked if I'd help her read to screen. Thus began a career in editing, writing, and publishing. Unfailingly kind, always motherly, disorganized in a way that brought cheer to my heart, brilliant at what she did, extolling the virtues of others while neglecting herself and her own needs, suffering disappointment and heartache without complaint, and trusting God to make things right in the end, it would be hard to overestimate the impact Linda has had on me and countless others. If there is a single person I could say with certainty deserves to be exalted, it is Linda.
Andy Bay
July 22, 2016
Most sincere wishes to Linda's family. She was always so full of joy even during her greatest trials. I love her love of the gospel, writing, the arts, her family.
We have you, Linda's children and grandchildren in our prayers and also Linda's siblings.

Sincerely and with Love,
Vaughn Bennett Hunter family
Judi
Brenda
Shauna
Vaughn
July 22, 2016
I'm so sorry to hear of your loss. My deepest sympathy and condolences to the family during this time of grief. Psalms 55 : 22.
July 22, 2016
Sincere condolences goes out to the Adams family for your sad loss.
July 21, 2016
Linda was an exceptional woman. We are going to miss her in our ward send stake. She shared her knowledge send talents freely. She can only make Heaven a better place.
Darlene Bennett
July 21, 2016
Linda was one of my most influential teachers and mentors, and unfailingly charitable in my interactions with her. She always found the best in me and treated me as the Savior would. When I later lived in her ward, I gained an appreciation of the depth of her testimony and her remarkable knowledge of the gospel. I have no doubt that the world is a better place for her having lived in it, and that I am a better person for having known her.
Joel Hiller
July 21, 2016
Here's a truly memorable woman who is going to be greatly missed. We admired her wonderful mind and memory. She was a great teacher. Heaven must be rejoicing to receive her.

Dick and Darlene Bennett
July 21, 2016
I loved my association with Linda through many years of book group. She always chose wonderful books to read and had the most interesting insights. I loved being around her when she was finishing her cancer treatments over the years. She was always so upbeat and happy to be with friends and grateful for more time on earth. I always felt loved and appreciated by her and honored that she would drive all the way to Provo to attend our book group sessions.
Janice Robinson
July 20, 2016
I have such fond memories of Linda. Smart, fun, funny. Such a good heart. She was such an inspiration to me. I remember her as being quite the traveler in her younger years. I thought to myself, if my cousins can travel to all of these amazing countries, then, I can make this happen for me. It was not long before I became a world traveler ---following in her footsteps. She gave me the the nudge and the confidence. Now! I have two children who are following in my footsteps as a world traveler. Thank you Linda for your inspiration. I don't believe I ever heard her speak an unkind word about anyone. She has accomplished so much in her time on this earth. My love goes out to everyone in her family. May she rest in peace and may we all be together as family on the other side someday.