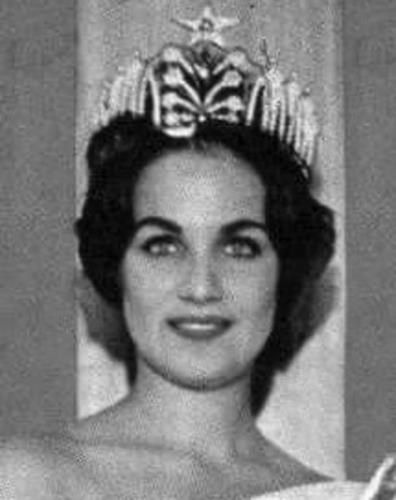 BORN
1941
DIED
2018
1941 ~ 2018
Salt Lake City, UT -Linda Jeanne Bement, 76, passed away peacefully at her home on March 19th. She was born in Salt Lake City on November 2, 1941, the only child of Charles and Elaine Stevens Bement. Raised in Sugarhouse, she was an avid skier and graduated from Highland High School.
Linda was crowned Miss Utah, Miss USA and Miss Universe from 1960-61. She taught future beauty contestants modeling and the essentials to succeed.
She was a talented artist, creative craftswoman, excellent cook and pianist. Linda was happiest caring for her pets and saving animals. She was especially fond of cats and dogs and enjoyed feeding blue jays and other birds in her backyard.
Linda married and divorced Hall of Fame jockey, Manuel Ycaza, with whom she had two children, five grandchildren and three great-grandchildren. She is survived by her two children, Manuel and Linda, her grandchildren, Trevor, Jonathen, Christian, Christina and Christopher, her great-grandchildren, Trey, Wyatt and Lewis. Linda later married and divorced Rob Sharp of Salt Lake City, with whom she had no children.
She spent her time helping other people, and regularly enjoyed donating vegetables and fruit from her backyard to the homeless and to the LDS Church. She was part of the Westminster College women's group. As a goodwill ambassador, Linda traveled extensively and inspired and mentored young women for whom she served as a role model.
Published by The Salt Lake Tribune on Apr. 15, 2018.
To plant trees in memory, please visit our Sympathy Store.
MEMORIAL EVENTS
To offer your sympathy during this difficult time, you can now have memorial trees planted in a National Forest in memory of your loved one.
MAKE A DONATION
MEMORIES & CONDOLENCES
9 Entries
Very Beautiful woman. This is a picture I found in my father's items after his Death.
Steven Pridgen
June 22, 2020
We offer our blessings upon you, Lyndita and Manual on the passing of your mother, our cousin. I remember the many times I spent at your home and laughing with sour Mom and playing with cats and dogs. We are both lovers of our dogs. Your Mom was beautiful inside and out. She is with her parents and you will always feel her with you. Sherrie and I both live in St. George. Come for a visit. You are always welcomed. All our love to you and your families.
Carolyn and Sherrie Stevens
July 17, 2018
May 8, 2018

Lindita and Manuel, I don't know if you will even remember me. We were like cousins back when you lived in NY and we lived in NJ. Our moms were really close friends back in Salt Lake. I think my mother moved back east because of your mom. My mom Vickie, brother Henry and I use to come and spend weekends with you in Long Island. I have so many fond memories of your mom and the two of you. I remember her abstract paintings and how much fun she was. We were always playing hide and go seek in that big house. We saw you a couple of time when we moved to Las Vegas and you moved to Salt Lake. I remember always calling your mom Aunt Linda and thinking of what a beautiful woman she was both on the outside and the inside. I always thought it was so amazing that my Aunt Linda was Miss Universe.I always hoped I would see her again. When your heart is empty, filling it with happy memories can help you find your smile. I hope you remember my mother, brother and me and how much fun we use to have together. I'm so sad to hear of your loss. Heidi Spencer (Marshall)
Heidi Spencer (Marshall)
May 8, 2018
Linda and I were good friends in high school. I saw Manuel when he was tiny then I moved to California, and we met up again when she was living in Salt Lake.

I am so sad about her loss. My memories are of a stunning girl who was kind and so thoughtful. I send her family my love and condolences. She was loved by so many.
Penny Raysor
April 24, 2018
Linda,
It was so good to hear from you after so many years. You sounded good and I was looking forward to meeting and really catching up as soon as I could get mom settled and feeling better after her surgery. After trying to reach you by phone in March, I decided you must be out of town...after awhile I thought I must have written down your number wrong, then John found your address for me and I sent a note. We were so shocked and saddened to see your obituary in the paper Sunday. I will always be grateful that I got to talk with you that last time and so sad that I didn't call you a few days earlier. I wish we'd had more time together over the years but will remember fondly those times we did spend with each other.
Much love dear cousin.

PS: Lindita and Manuel,
I haven't been able to find a way to contact you so I'm hoping this note finds you. Nobody loves you quite like your mom and I'm sorry you have lost yours so soon. I was looking forward to hearing all about you from Linda. I hope you are both doing well and I'd love to be in touch. I'm not on social media but my husband, John Gurr, is. Our home phone is 801-533-8962. My mom is 94 and having some health problems so I'm not home much right now, but you could leave a message if you'd like, I'd love to hear from you.
Big hugs to you.
Ilauna Gurr
April 18, 2018
Linda and I grew up together on Glen Arbor(Christmas Street). As my dear, loyal friend, we shared so many fun, happy times together. I loved her dearly and shall treasure the choice memories during those care-free years.
I send you my love Manuel and Lindita--Always remember that your mother was someone extra-special!!!
Deanne Simmons Evans
Salt Lake City, Utah
April 17, 2018
Dear Lindita, May God bless you and your family in this time of sorrow.
It was an honor to meet your mom, she was a very special lady. I met you and your mom while caring for your grandma Elaine many yrs ago.
Marina Milner, RN
Marina Milner
April 15, 2018
Sorry for your loss Lindita, love ya cuz
Steve Bement
Family
April 15, 2018
Dear Lindita, Manuel, and all of your children and grandchildren,

Growing up was that much more memorable because of your friendship and the fun we had at your house. Your mom was ever-present - close enough to step in if needed, but far enough away that we knew we weren't being constantly watched over. I loved all of the animals you guys raised, and have fond memories of watching pageants together which included your mom's expertise in knowing who would win.

I'm sincerely sorry about your mom's passing and send you big hugs from Colorado. My mom sends you her love as well. Hold each other tightly.