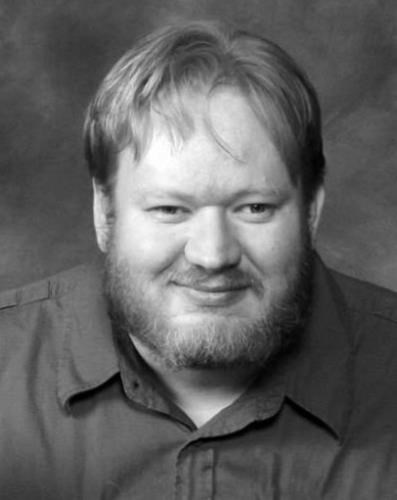 BORN
1973
DIED
2016
ABOUT
Hillcrest High School
FUNERAL HOME
Goff Mortuary
8090 S. State St.
Midvale, UT
1973 ~ 2016
Nathan Earl Tippetts, our beloved son, brother, cousin, uncle, and friend; "Nathan" to his closest family members, and "Earl" to everyone later in life, slipped the surly bonds of Earth, and now dances in the skies. Nathan left us peacefully on Sunday, August 7, 2016, after gallantly confronting health issues with courage and strength. He was born February 9, 1973, to Donald & Harriet Tippetts. Nathan is survived by his parents, Donald and Harriet, brothers Jeff (and Britt), Scott (and Dianne), and sister Laura (and Brian) Burrows. He also leaves sister emeritus, Patty (and Jim) Bushman, nephew and niece Joshua and Jennifer Tippetts and great-nephew Dominic Lukas, and nephews Breckon, Addison, and Sebastian and niece Amelia Burrows. He is also survived by numerous friends, including especially Michael McFarland and Sue Moesinger Cooper.
Services include a Family and Friends Gathering at Goff Mortuary on Friday, August 12, 2016, from 6 - 8 p.m. (8090 S State St. in Midvale). Family and friends may also call on Saturday, August 13, 2016, from 10:00 - 11:45 a.m. prior to the service at the Midvale North Stake Center (97 W 7500 South in Midvale). The Funeral and Celebration of Life will be at 12:00 p.m.
Nathan's last wishes are being honored for him to be cremated and interred near his grandparents in Idaho. The family requests that in lieu of flowers, please consider a donation to a good cause that will bless others. For more information, go to: www.goffmortuary.com
Published by The Salt Lake Tribune on Aug. 10, 2016.
To plant trees in memory, please visit the Sympathy Store.
MEMORIAL EVENTS
Aug
12
Memorial Gathering
6:00p.m. - 8:00p.m.
8090 S State St.
Midvale, UT
Aug
13
Calling hours
10:00a.m. - 11:45a.m.
Midvale North Stake Center
97 W 7500 South, Midvale, UT
Aug
13
Celebration of Life
12:00p.m.
UT
Funeral services provided by:
Goff Mortuary
MAKE A DONATION
MEMORIES & CONDOLENCES
Sponsored by Goff Mortuary.
6 Entries
I will miss this gentle giant of a man, and the fierce manner in which he fought to make sure his voice wasn't silenced when he saw the morality underlying the issue we were discussing. May God bless and lift you, Tippetts family, for allowing this gifted soul to emerge and for sharing him with those of us who had the privilege of knowing him. -- Jeff Fowles
August 11, 2016
I am so sorry for your loss Don and Harriet and family. Love you.
Carolyn Sharp
August 11, 2016
To the Tippetts family: Hello it has been a long time since we saw your family, but we have wonderful memories of living on Colorado Dr. and our son, Mike, being friends with Nathan. Back then, when the guys were little tikes, Mike met Nathan and came home and told us of his new, great, friend: Nado. We were happy to hear this news and interested to meet Nado. When we did meet him it was wonderful to know him - what a nice boy was Nado (and we found out his real name but he remained Nado to us).
Mike and Nado played together often. Nado had a really neat (the cutest) cowboy outfit. Nado's mom surprised our Mike by making (sewing) a similar cowboy outfit for Mike. It was so special of her to do that - Mike really enjoyed wearing it atop his clothes just like Nado did. The two guys played cowboys together. Oh, what fun!
Always, the Tippetts family were so great to Mike and our family.
The news of Nado's passing is so sad for all of us. Altho we have not seen Nathan in many years we remember him and your family fondly. All of us are saddened of this news. We will always remember those happy memories.
Christine Smith
Christine Smith
August 11, 2016
Harriett I am so sorry for your.loss. i will lift you up in prayer at this time and just wanted to express my condolences to you and your family. He no longer is in pain and is soaring like a butterfly in heaven.
Gwen Rognon
August 10, 2016
We feel privileged to have known Nathan since he was a little boy. We will all miss his gentle kind manner but know he is at peace and free from his pain he endured in the last few months. Our thoughts and prayers are with you all. May you find peace and comfort that he received the best of care and love from you Don and Harriett. Love from the Hall family.
Vicki Hall
August 10, 2016
Dear Cousins,

Our hearts ache for you. Sending love and keeping you in our thoughts.