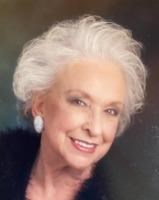 Bountiful, UT —Our vibrant, elegant Nola Juanita Miller left us on September 17, 2021. She was born on November 28, 1932, in Salt Lake City, Utah, the daughter of William Clarence and Marie Elizabeth Hjorth Thomas. She graduated from South High School and attended the University of Utah. Nola married Gordon Stuart Thompson on January 22, 1954, and their union bore her the joy of six lovely children. They later divorced and she became a single mother; a title she rose to with pride. She married Walter James Miller on February 12, 1976. He preceded her in death, as did her parents, brothers, William Clarence Thomas, Haynes Hjorth Thomas, sister, Yvonne Thomas Jorgensen, and her son-in-law, Avenicio Ernest Baca, Jr.

Nola was a dedicated employee of the Utah State Office of Education for 35 years. Following the example of her parents, she was devoted to volunteerism throughout her life. She gave her time to the national American Lung Association, Lung Association of Utah Board of Directors, Utah Opera Guild, Pioneer Theater Company, several LDS Church callings, as well as many other political and work-related groups. She delighted in including her children and grandchildren in these volunteer activities. Nola was a loving, enthusiastic mother, sister, and friend; going out of her way to call on anniversaries, deliver cookies on birthdays, bake baklava and fudge at Christmas, and be there for others when needed. She had a green thumb for houseplants, a flair for floral design, and was an accomplished seamstress, sharing her talents with her children and grandchildren alike. Nola had a lovely alto voice and was a skilled pianist. Accompanying her children and grandchildren filled her with pride as they shared their talents with others. She had a love of cats and dogs, and we're sure she had a happy reunion with each of them.