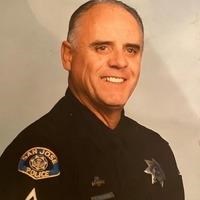 Born in Fort Lewis WA June 19, 1942. He was raised in Cedar City, UT. Robert met Laurel while working at the lodge in Zions Natl Park. They graduated together from Southern Utah University. They were sealed in the Logan temple August 22, 1963. He attended the police academy at San Jose State University in CA.

Predeceased by his parents Clifton and Carol.

Robert served faithfully in various capacities for The Church of Jesus Christ of Latter Day Saints. He spent his 28 year career as a police officer for the city of San Jose, CA. After retiring from the police dept. Robert and Laurel moved from Santa Clara, CA to Alpine, UT in 2002. Robert quickly rose to neighborhood fame with his pranks, magic tricks and entertaining stories, just the same as he did while living in CA.

He was a spiritual giant and loved to serve others. He had a passion for the gospel of Jesus Christ, his family and golf. Robert had a knack for human connection and touched so many lives.

"That makes me the winner." -Bobby Bare

Published by The Salt Lake Tribune from Jun. 22 to Jun. 27, 2021.
To plant trees in memory, please visit the Sympathy Store.
MEMORIAL EVENTS
To offer your sympathy during this difficult time, you can now have memorial trees planted in a National Forest in memory of your loved one.
Funeral services provided by:
Warenski Funeral Home
MAKE A DONATION
MEMORIES & CONDOLENCES
Sponsored by Warenski Funeral Home.
8 Entries
I recall what a great bishop he was, and also what a great friend he was to our family in Santa Clara. Heaven just became a better place for his arriving, and earth less so for his passing.
Jay M Giroux
Friend
June 30, 2021
Laurel and family, I am so saddened to learn about Robert. He was such a fun neighbor -- always doing crazy, random things. My forever image of him will be of him riding down the street on his bike, always stopping if he saw me outside, never missing an opportunity to chat or share a bit of wit. I became increasingly used to knowing that I would have NO idea what he had on his mind that day! When my kids were younger, they adored his magic tricks. I still have a sketch tucked away in my scriptures of a drawing he did of me playing the piano in church. What a talent he had! He was one of a kind and the world was certainly a better, and more fun place to be because of Robert Browning. Sending all my love and best to you, Lyn
Lyn (Timboe) Francis
Friend
June 28, 2021
Laurel, I love you and am so sorry for your loss! Grief is so hard to cope with but I'm sure with your wonderful family you will be okay. Love Maudeen
Maudeen Burton
June 25, 2021
So many memories of our Bishop Browning. We love and adored him and always will. We find some comfort picturing his heavenly 'welcoming committee' of which I"m certain my parents were part. Blessings to you girls in the tender days ahead. Loving thoughts and prayers are with you. Julia Wilcox Bottita
Julia Wilcox Bottita
June 25, 2021
Bishop Browning married my husband and I on June 18, 1983. How ironic that he passed away on our 38th anniversary. He was a wonderful man.
Virginia Akers Guilbert
June 25, 2021
Robert is one of my favorite people. I met Robert working at the Bank of American Fork. He was always so fun. He shared many magic tricks, jokes and kindness. He always brought joy to the office and was one of my favorite customers. I did cub scouts and Robert came to several den meetings. He would share his magic tricks while teaching the boys about laws and safety and how to be good citizens. The Boys really enjoyed and learned alot from Robert. My condolences go to Laurel and family. Robert is a very fine man and good example. He will definely be missed.
Jenifer Barney
Friend
June 24, 2021
Robert was a great man, a giant. He was funny, sensitive, sensible, frank, creative and seemed to love lifting the spirits of anyone within is reach. He served as our bishop when our family was quite young and I was a law student. A drawing he gave me comes to mind: Determined but somewhat disheveled, juggling a stack of thick books, holding a pen and paper, some sheets flying in the wind, I'm racing to a finish line marked "California Bar." And that was about how Suzi and I felt. He reminded me that regardless of life's pressures and responsibilities, you're never too far from a good laugh.
Martin G McOmber
June 23, 2021
Dear Laurel, I have such fond memories of Robert. He and my brother, Lory Misel, were best friends. Robert did have a great sense of humor, which made him so much fun to be around. So sorry to hear of his passing. Hugs
Jean Misel Lamoreauxx
Friend
June 23, 2021
Showing 1 - 8 of 8 results