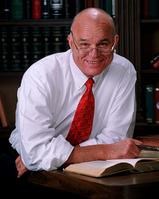 Bob, who leaves a lifetime legacy of generosity and service, was born October 10, 1935, in Preston, Idaho, to James and Winnifred Jensen DeBry.

He grew up in Rigby, Idaho, where he thinned beets, harvested potatoes and took great pride in his horse "Nettie S." He worked at the Motor Vu Drive-in Idaho Falls, sold pots and pans door to door, played high school basketball and nurtured lifelong friends.

From 1956 to 1958 he served as a missionary for The Church of Jesus Christ of Latter-day Saints in the Netherlands where he developed a lasting love of the Dutch people, language and culture.

With his father and partner Lynn Hilton in 1969 he established the Foreign Study League that created opportunities for thousands of high school students to explore Europe.

He was the founder of Robert J. DeBry & Associates, and over a half century he built it into one of the most recognized law firms in Utah. Bob loved going to work at the firm; he went to work every day until the spring of 2020.

He was a passionate advocate for victims of drunk driving and for the use of helmets while cycling. His continuing initiative "Buy a Helmet, Save a Life" has distributed more than a quarter million bicycle helmets in Utah at below cost or as outright donations. As a supporter of Mothers Against Drunk Driving (MADD), he donated $500 for every case that he settled or won, and for years he paid for taxi rides home to keep people safe on the roads on major holidays.

In his personal life, Bob was known by his friends in his church congregation as the unselfish and giving ward mission leader (his favorite calling of all time) and bishopric member who quietly and freely met the needs of people. He met those needs with his time, with his means and his expertise. Bob found great joy in that service.

Bob loved swimming laps in Turtle Bay on the North Shore of Oahu and lying on the beach with Barbara. He loved great food and a good tie.

Neighbors and strangers came to know him as the man who, at Halloween, handed out not just one full-size candy bar to each trick-or-treater but a whole bag of candy bars to every child who came to his door.

In 1996, he married Barbara Anderson Pulsipher.

Bob loved his children and was an extraordinary stepfather. Nothing made him happier than his grandchildren who will always remember his generosity.

The family wishes to extend a sincere thank you to Mike Jensen and all the wonderful Home Instead caregivers; and Erika Negley of Canyon Hospice.

In lieu of flowers, the family suggests contributions to the Missionary Fund or the Humanitarian Aid Fund of the Church of Jesus Christ of Latter-day Saints.

To plant trees in memory, please visit our Sympathy Store.
Published by The Salt Lake Tribune from May 20 to May 24, 2021.
MEMORIAL EVENTS
May
23
Viewing
6:00p.m. - 8:00p.m.
Wasatch Lawn Mortuary
3401 South Highland Drive, Salt Lake City, UT
May
24
Graveside service
12:00p.m.
Larkin Sunset Gardens
1950 East 10600 South, Sandy, UT
Funeral services provided by:
Wasatch Lawn Mortuary
MAKE A DONATION
MEMORIES & CONDOLENCES
Sponsored by Wasatch Lawn Mortuary.
16 Entries
Our sincere sympathy to Barbara and the family. We have memories of friendship that last a lifetime. We pray for you (Barb) and your wonderful family.
Robert Bauman
Friend
June 5, 2021
Oh how Stuart and I enjoyed and admired our dear friend Bob. Stuart loved him since they were missionary companions in The Netherlands and remained friends throughout our lives. I am so sorry I missed the announcement of his passing until I was back on line today (May 27th). My love, sympathy and special friendship goes out to Barbara and all the family as you continue to honor Bob.
Helen Ward Poelman
Friend
May 27, 2021
My memories of Bob go to the early years of his partnership with my dad, Lynn Hilton. The partnership changed his life (and mine) and was an enduring friendship that we all hope for in life. Bob was a great and generous soul; the world is less for his passing.
Cynthia Hilton
May 24, 2021
Mr. Debry attended my grandpas funeral (Samuel Rushton) and i always thought he was a genuine guy. My thoughts and prayers go out to his family and friends.
Kellie Clive
Acquaintance
May 24, 2021
Heard about Bob´s passing- sending our prayers to you and your family. Sorry to miss the viewing this evening - tell your kids hello from us. Love, the Shields family
Jeff and Patty Shields
May 23, 2021
We appreciate our friendship with Bob and Barbara as Jazz fans having our season ticket seats next to each other and sitting together during the games for years. Great memories! We appreciate the opportunity to be a part of the law firm that Bob started and we always appreciated his leadership in that firm. We send our deepest condolences to Barbara and the extended DeBry family.
Leonard McGee and Robin Davis
Friend
May 23, 2021
Barbara, Our hearts are with you at this hard time. Bob lived a great life and you added so much to his love of life. May the Lord be with you as you mourn and celebrate Bob's life.
Ann and Doug Pehrson
May 23, 2021
Rest in peace dear cousin. Thank you so very much for the lifetime of kindness and generosity you have shown to our whole family. We love you.
Ken and Marilyn (DeBry) Peck
Family
May 23, 2021
May you Rest In Peace and May your family find solace with the fact that your family first principle was lived out by example.
Patricia Cárdenas-Wallenfelt
Friend
May 22, 2021
Through various experiences with Bob and his law firm over many years, we knew him to be a generous and caring person. It was very apparent one of the principles he lived by was helping others in need.
Stephen Spencer
May 22, 2021
Adios, missionary companion, friend, sterling example. Friends since high-school, we have garnered uncountable memories of our time and experiences together. Every trip from Arizona to Utah included a lunch or a visit in the office. You will be sorely missed, and forever loved!
Robert G. and Helen M. Bradford
Friend
May 22, 2021
I remember Elder DeBrij as a young girl in Rotterdam, The Netherlands in the early fifties
Trudy Bekker Bogner
Acquaintance
May 21, 2021
I worked for Robert DeBry as a paralegal in the St. George office for 9 years. He was a generous man and employer. I´ll always cherish the time I was there.
Anna Shaw Olson
Work
May 21, 2021
Bob was a good, kind man. I worked for the firm and it was amazing to watch him interact with children who came in to get a bike helmet. He was always very kind to me. My condolences to his family.
L. Christensen
May 21, 2021
Bob provided the first opportunity for me to work in the legal field, as a paralegal assistant. He said he would provide enough experience that I would know in 6 months if I wanted to be an attorney, that was 31 years ago. I became an attorney. Although our paths diverged, I am grateful for the trust he showed in me during the time I worked for him.
Brad Harr
Work
May 20, 2021
I had the priviledge of working with Dr. DeBry and Dr. Hilton at DeBry and Hilton Travel Agency. I was still in high school, and it remains one of my best memories. He was so generous and kind.
Just stopped in at Robert DeBry and Associates, here in St. George, to get bike helmets for my grandchildren, and shared my stories of working with him. He was the best, and his legacy will live on.
Prayers to his family,
Joan Robbins Flandro
JOAN ROBBINS FLANDRO
May 20, 2021
Showing 1 - 16 of 16 results