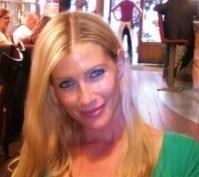 Salt Lake City—On March 12, 2021, we lost our beautiful, funny, and adventurous Sheri. Sheri was born in Denver, Colorado and grew up in the mountains of Northern California (Lake Almanor and Quincy) where the family had horses, chickens, and cows.

At age ten she moved to Utah with her mom and brother Jason. Sheri learned to make friends quickly and easily, a trait that she carried with her the rest of her life. She was gifted with people and was constantly looking for ways to help others. She was able to connect with family and friends, and many would open up with her even early in a relationship.

In Salt Lake City she graduated from Cottonwood High School with intentions of becoming a scientist. She was beautiful and cordial and would catch the attention of those around her. She would brighten a room when she walked in, and people loved to be with her.

Organized religion was a struggle for Sheri, but she had a deeply spiritual side. She loved nature and could be found outdoors, hiking or snowboarding, or walking along the seaside. She cared about the spiritual well-being of others, both people and animals, generally putting others ahead of herself. She married then First Lieutenant Trevor Phillips in 2004. On meeting Trevor, she wrote in her diary:

"Strange things happen in a woman's brain when . . . the flood of love courses through her blood and soul. This beautiful man made me, for the first time in my life, want to be a wife."

She and Trevor lived in California and soon had their first child, Alyssa Nicole. Alyssa was followed two years later by their son, Alexander Michael. Sheri's life centered on them. She loved her husband and children and struggled constantly to provide a rich and meaningful life for them.

Sheri never took the easy path in life. Part of what made her so fun to be with is that she wanted to do things differently, wanted to prove herself, but not in conventional ways. She was smart, but found school to be tedious. Yet she continued taking courses for years, trying to find the right fit that would interest her. She attended nursing school and became a respiratory therapist, which her aunt Anita, who had emphysema, appreciated. She was not fond of growing up in Utah, but could not wait to get back to Utah once she left.

Above all, Sheri cared about people. She was close to many as a friend and a confidante, spending hours on the telephone with a friend in need. She volunteered regularly trying to help those with physical or emotional struggles. She was not just a wife, mother, sister, or daughter but the family member to call first when one needed a good talk. She did not just provide a home, but was always pushing to make it better. Sheri will be dearly missed.

In remembrance of Sheri, a funeral service will commence on Tuesday March 23, at 11:00 AM in the LDS chapel located at 1250 East 4800 South. A social period will start thirty minutes prior to the funeral. Face-coverings and social distancing will be appreciated.
Published by The Salt Lake Tribune from Mar. 19 to Mar. 24, 2021.
To plant trees in memory, please visit the Sympathy Store.
MEMORIAL EVENTS
Mar
23
Funeral service
11:00a.m.
LDS chapel
1250 East 4800 South, UT
MAKE A DONATION
MEMORIES & CONDOLENCES
1 Entry
What woeful, sad news that Sheri died. I am so sorry and miserable for you.
Words cannot express.
Sheri is a bright and shining star
The world dims a bit without her
Oh to believe in a glorious hereafter
I struggle with that but think that the essence of a soul
must survive in some form. We miss them
We want them still to be
To be happy somewhere, resting, at peace
still able to wonder and grow.
May your hearts, Kathryn and Wayne and Jason and family, find
hope and consolation through your continued love for Sherri and each other.
I send love,
Susan Mumford
Susan Mumford
Friend
March 30, 2021
Showing 1 - 1 of 1 results