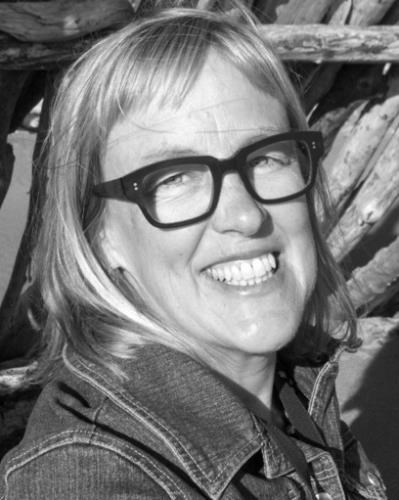 BORN
1954
DIED
2017
1954 ~ 2017
Suzanne Simpson was born to Marilyn Jean and Harry Simpson in Detroit, Michigan on September 15, 1954. She was the oldest of three children (survived by Jo Ann and Jim).
Her education was first at Eastern Michigan, then the University of Michigan, where she received two degrees. She also attended Goddard College in Vermont and Washtenaw Community College in Michigan. She returned to the University of Michigan, getting her Masters in landscape architecture and urban design. Her life was like a collage with numerous interests including sociology, psychology, environmental studies, social work and urban studies/design. Her range of career paths was indicative of her expansive curiosity and exploratory nature. When she landed on art as her life's passion and work, it was no surprise. Art already had been a thread in her life since she was a child.
Suzanne's free spirit was also reflected in the various states she lived in : Michigan, Vermont, New York, Florida. She moved to Utah in 1989, where she worked as part of the Kids Against Violence Program, then with artist Rebecca Campbell. Other positions included the Utah Artist-in-Residence Program where she taught in various schools. In 1994, she was asked to teach art at Weber State University. Shortly after that, she added teaching at Westminster College. Between the two schools, she was responsible for 5 to 7 classes per semester. She taught for more than 20 years.
She was highly respected as an outstanding artist with remarkable creativity and personal success (photography, collage, design, assemblage, etc) Her art was seen on covers of magazines as well as in exhibits, including The Art Barn, and most recently at the Parliament of World Religions.
Most importantly, Suzanne was a beloved, dedicated teacher, devoting herself entirely to her students, many of whom became and remained her friends. She gave of herself unsparingly and was absolute in her commitment, encouraging and launching the careers of many fledgling artists. She'd stay up to help her students sometimes till 3:00 in the morning.. This remains her proudest legacy.
Suzanne will be remembered for her intense love of nature and connection to the earth, for her boundless curiosity, for her sunshine smile and joyful spirit. The success of her life is measured by the beauty of her art and the abundance of friends who will miss her dearly. She died on November 3rd, after a courageous battle with breast cancer. Typical of her indefatigable spirit, she held her own until the end and died with her values intact. She left without the assistance of drugs or any unnatural assistance, including aspirin.
Her great regret at the end of her life was that she had not fulfilled her dream of completing a stone house, a Kiva, in Torrey, Utah where she had aspired to create artwork full time in an outdoor environment.
A celebration of her life will be held at 7:15 PM on November 15 at the home of Jerry and Elise Lazar, 4187 S. Neptune Drive. In lieu of flowers, Suzanne requested that you consider donating to an environment organization of your choice.
To plant trees in memory, please visit our Sympathy Store.
Published by The Salt Lake Tribune on Nov. 8, 2017.
MEMORIAL EVENTS
No memorial events are currently scheduled.
To offer your sympathy during this difficult time, you can now have memorial trees planted in a National Forest in memory of your loved one.
MEMORIES & CONDOLENCES
15 Entries
Missing you madly Suzanne.
Ramona Sierra
Friend
November 2, 2020
It's a gorgeous fall day in Ann Arbor, Michigan. The colors of the leaves, a bright blue sky.... Suzanne, you are close to my heart. You loved fall colors and looked great wearing them, always. I miss you and think of you every day. I'm thinking of you and celebrating the joy you brought to the world in these crazy times!
Terri Sarris
Friend
November 2, 2020
Suzanne. I think Leonard Cohen's song of the same name fits you perfectly. Never knew you very well. You were a ray of sunshine, with a vivacious and enthusiastic persona and smile. Our paths crossed several times, like ships in the night, many, many years ago back in Ann Arbor. Memories. At the Great Lakes Shipping Company, where you were a cocktail waitress. On the AATA bus to Washtenaw Community College, where you were taking an art class. At the U of M School of Natural Resources, where you were a Masters student in Landscape Architecture. At the bar in the Whiffletree. You drove a red Volvo 240D.

Then paths diverged, and contact lost. Years later, a chance meeting at the Sundance Film Festival during a screening of the Spanish film Inconscientes.

Good to know that you assisted, motivated and helped many students during your long tenure at Weber State and Westminster.

Rest in Peace, you sweet, free spirited woman.
scott almburg
August 31, 2019
I worked with Suzanne at The Moveable Feast in Ann Arbor, now decades ago. Suzanne was an incredibly warm and generous person and we became fast friends. At the time I think she also did some work mounting retail windows in Ann Arbor. I loved the way she affectionately addressed her female friends as "woman". I can still hear her song-like voice. I had hoped to hear it again. It was tough to stay in touch with Suzanne after she moved to Utah. I have always missed her friendship, and still have a postcard she sent me after I moved to San Francisco. It's hard to imagine the world bereft of her infectious spirit.
Vicki Engel
Friend
November 15, 2017
With many to choose from, one story: Suzanne and I went to Europe together. From Paris we traveled to Versailles. Of course, she wanted to photograph the Fountain of Apollo after dark and with no people around. We hid out until the guards we gone and then photographed for quite a while. It was great. When it came time to leave we faced a dilemma, no exit was open. But fate intervened, as we approached the large gate in the front courtyard a worker was just leaving and we glided out the open gate with him.
Thank you for sharing your joyous heart.
Greg Murray
November 15, 2017
Suzanne and I were dear friends from Ann arbor days. She had a lightness of being that shone through her, even as she fiercely sought out truth and beauty in the world.This last August, I was traveling in Utah and was searching for contact info for Suzanne and I suddenly received an email from her with her news. It was blessed serendipity and we were able to spend several lovely hours in the effortless dialogue that always came so easily to her. She is with us still, in our hearts, our minds and souls.
Terry Youk
November 14, 2017
Suzanne and I were housemates in Ann Arbor in the 80s. I will never forget the day we met. We shared a two-bedroom flat in a big old house for several years, then moved together to two other apartments. She designed costumes for the company with which I danced, married my dear friend Jim (a dancer in the company), and remained in my heart after she moved to Utah. She taught me so much about being a loving person, a friend, an artist.... She was a light among lights. I'm so saddened by her passing and am glad she is at peace. Her leaving us is the world's loss.
Terri Sarris
November 13, 2017
Rest in Peace, dear Suzanne!
Hallie Robbins
November 13, 2017
She was a wonderful and dedicated SLC Farmers Market patron. She loved smelling and purchasing as many fresh herbs as we had available which reflected her sensual nature and zest for life. She really got to know her farmers and it was a pleasure chatting with her every week during the summer. She really looked into your eyes...
Andrea Morgan
November 11, 2017
I met Suzanne at Anderson Ranch where we did workshops together with our friend Holly Roberts. Suzanne was a tireless worker and dedicated artist with a generous heart. We hiked together in the aspens and worked side by side in the studios. She was also a dedicated enviromentalist and a wonderful teacher.
Om Shanti Shanti Suzanne
Go in peace my friend on your journey into the light.
Pompe Strater-Vidal
November 10, 2017
I'll always remember her kindness and joy. Suzanne was such a beautiful person.
Kirstin Scott
November 10, 2017
Suzanne, I will miss your beautiful loving soul and the light you shared with us all. Sending love and light with you on your next journey. Holding all who are grieving you in my heart. xooxox Barb
Barb Haskayne
November 9, 2017
Sad to know of your journey's end here! However, glad in the knowledge that our paths crossed more than once.

Confident that the next stage will be even more to your liking.
Rafa
November 8, 2017
My dear Suzanne. I miss you. I keep forever in my heart all your kind words and love that you gave in big bundles. Rest in PeacForever in the Light.
November 8, 2017
Blessings for the ongoing journey for this beautiful and vibrant soul; we were blessed by her life. She lived the beauty way.
Ramona Sierra
November 8, 2017