Teddy Eugene Brewerton was Born March 30, 1925, in Raymond, Alberta, Canada, to Lee and Jane Brewerton along with his older brother Steele. Ted and Steele were closer than your average brothers. Despite living apart most their lives, their continued friendship and love extended up until the day Ted passed. He passed away peacefully at home with his loving wife beside him on September 17, 2021.

His love for serving in the LDS Church started early. At the age of 24, he served a 3 year Mission for the Church of Jesus Christ Of Latter-day Saints in Uruguay from 1949 to 1952. Upon his return, he went to Vancouver Canada, to propose to his Eternal Companion, Dorothy Natrona Hall.

Ted married Dorothy February 11,1955. They have 6 children together: David, Andrea, Leanne, Lycia and Michael and are preceded in death by their daughter Michelle. Ted was fortunate to be adored by his 14 grandchildren and 12 great grandchildren.

He was called to be an LDS Bishop in Calgary Canada from 1962-1965. He was then called to be the first Mission President in Central America covering 5 countries: Costa Rica, Honduras, Nicaragua, Panama and Venezuela. He consequently was a Stake President, Regional Representative, and then called to be a Member of the First Quorum of the Seventy in 1978.

Ted and Dorothy lived and served 19 years of their life in Latin American Countries where they fell in love with the people and cultures. Their family not only continued to grow throughout these callings but also experienced the beautiful diverse countries Ted and Dorothy served in.

After receiving his Emeritus status in 1995, Ted and Dorothy were called to be temple presidents of the Mexico City temple. After which he was called to chair a group to translate KJV of the Bible into Spanish. Ted worked with 15 Americans and Latins on this calling, which stretched across 8 years of his life.

Above all else his love for his wife Dorothy was unparalleled and eternal.

Elder Brewerton was one of the most selfless, whole hearted people to walk this earth. Ted was honest to a fault, he instilled in his children incredible patience and the greatest joy in life is to serve others, which was evident in his life work.

To continue his love of service the family requests in lieu of flowers, donations be made to Humanitarian Aid found at philanthropies.ChurchofJesusChrist.org

The services took place on September 27, 2021. A recording of the service can be viewed on the obituary at larkinmortuary.com. 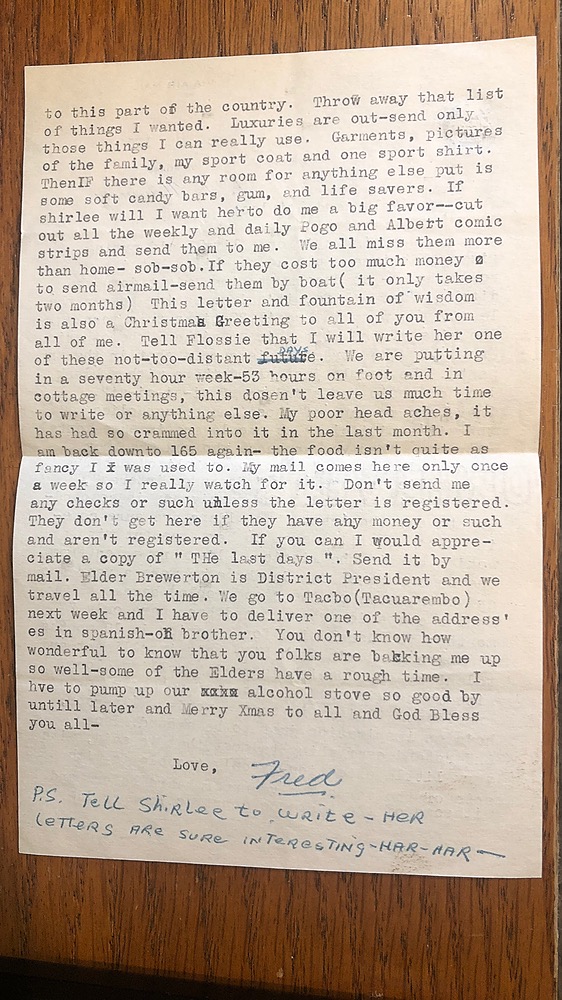 Grant Lundberg
September 27, 2021
Your father was my dad´s missionary trainer in Uruguay in 1950. I literally found this letter today for the first time and decided to look up Teddy Brewerton to see if he was alive and found you all buried your father TODAY! What an incredible turn of events. Well please enjoy this and know my father loved your father and spoke of him frequently. I think I even met your dad once at the church office building in my dads office before he took me to lunch. God bless you all! I have a ton of other Uruguay mission stuff if you´re ever interested. [email protected]
Grant Lundberg
September 27, 2021
I´m sorry to hear of Elder Brewerton´s passing, but he was a wonderful person. I knew him as the Central America Area President when I was Bishop of Cardenas Ward in Panama. He was very kind and approachable. David Church 801-694-3070 Draper, Utah
David Church
Friend
September 27, 2021
Sorry Dorothy to hear about your loss. I remember you as my YW leader in Lethbridge and also how beautiful and sweet you were and I am sure still are
Georgina Taylor (Stringam)
Friend
September 26, 2021
Showing 1 - 5 of 5 results