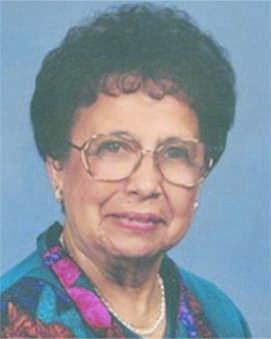 BORN
1924
DIED
2017
FUNERAL HOME
Sunset Northwest Funeral Home
6321 Bandera Road
San Antonio, TX
September 15, 2017
Adelfa A. Garza passed away peacefully in the early evening of Friday, September 15, 2017 at the age of 93. She is survived by her daughter, Norma Mouton, and her son, David Garza, along with their respective spouses, Jay and Angela. She also leaves behind three grandsons, Raymond Mouton, Matthew Garza and Andrew Garza. Adelfa earned her Associate of Arts degree from Wayland Baptist University. She worked for over 15 years as an accounts technician at Kelly Air Force Base now Joint Base San Antonio. She was married to Jose Garza for 22 years. He preceded her in death in 1979 and she continued to reside in the home they had made together until her health no longer permitted her to be alone.

It counts as a credit to her that she raised two children with strong Christian values. Her grandchildren follow in those same traditions. She believed that her Christian duty was to evangelize family first and help her fellow Christians any way she could. These things she did.

Published by San Antonio Express-News on Sep. 20, 2017.
To plant trees in memory, please visit the Sympathy Store.
MEMORIAL EVENTS
To offer your sympathy during this difficult time, you can now have memorial trees planted in a National Forest in memory of your loved one.
Funeral services provided by:
Sunset Northwest Funeral Home
MAKE A DONATION
MEMORIES & CONDOLENCES
Sponsored by Sunset Northwest Funeral Home.
6 Entries
We are praying for your family at this time. Thankfully your know this is a temporary situation and will be reunited with her in heaven at some point in the future. Hugs.
Joy Moore
September 23, 2017
David, Angela,Matthew and Andrew, you are all a tribute to her. I know that she will be missed, but because of her faith, she is not dead just transitioned to a life away from us temporarily. Sorry, for your pain of missing her, but remember the good times and the fun that she had with you over the years.
Ed Kiser
September 23, 2017
Remember all the happy times and the wisdom she shared with you.
Margaret Bell Synan
September 23, 2017
Dear David, Norma and family members. While my heart still hurts deeply to know your Mom is no longer here to hug, talk, and laugh with; [Her love, support and prayers (after my own Mom's death and the beginning of my law career) were absolutely priceless.] I am glad she is in her new beautiful spiritual body with Yeshua-Jesus. Our prayers and love to all. Joseph and Joyce Diaz Logue
Joyce Diaz-Logue
September 22, 2017
I was so sad to hear about Aunt Del. Please know you're in our thoughts. Pat and Terry Nicholson
Pat Nicholson
September 18, 2017
Dear David and Angela
So sorry to hear about Aunt Del. You and your family will be in our prayers.