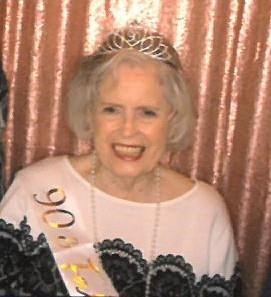 She was preceded in death by her husband, Doctor Alfred Leinweber; parents, Adolph and Esther Brown; and her sister, Esther Anna Brown. Additionally, she was preceded in death by her husband's brother and sister-in-law, Donald and Ada Louise Leinweber. She is survived by her son, Frederick Leinweber; daughter-in-law, Tabetha and grandson, Dmitry. She is also survived by her nephews, Mark, Paul, and Bruce; and by her niece, Louise as well as their spouses and children.

The former Betty Jane Brown met her husband, Alfred while he was a student at Saint Louis University Dental School. They were married in Saint Louis in 1957 and enjoyed 53 years of marriage together. Betty attended Washington University Art School in Saint Louis. She studied and created art in many places, where Alfred was stationed as a US Air Force dentist. She enjoyed being an Air Force wife and living in Luxembourg, France, Texas, New Mexico, Ohio, and Missouri during their career together. She enjoyed belonging to the Air Force Base Chapels and Officers Wives Clubs. She always enjoyed cooking, reading, and studying history and art, as well being in arts and crafts fairs.

She was a member of many churches, including the High Desert United Methodist Church in Rio Rancho, NM prior to going to live with her son, Fred, and his family in Texas. She was loved greatly and will be missed dearly.

In lieu of flowers, donations may be made to the American Cancer Society. Please visit our online guestbook for Betty at www.FrenchFunerals.com